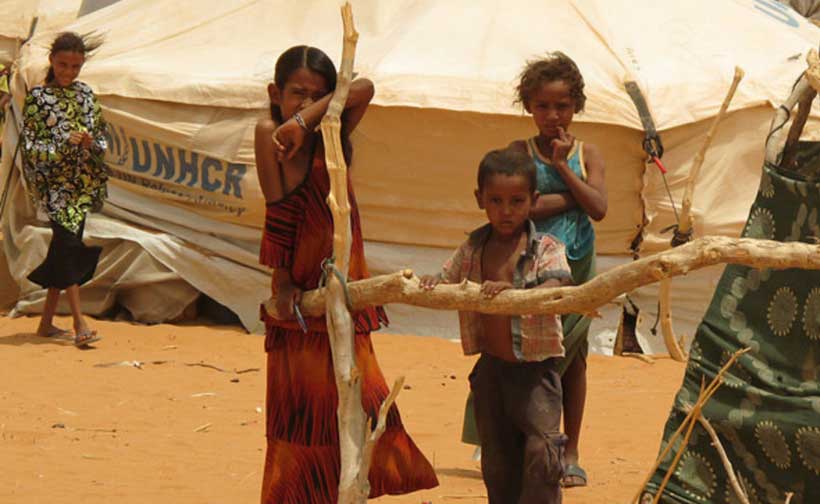 Drought has affected residents of the Mbera refugee camp, Mauritania, in the Sahel region of Africa. Photo: WFP/Justin Smith

In an appeal for increased funding to support millions of people affected by spreading violence in Mali, Niger and Burkina Faso, the UN Resident and Humanitarian Coordinators for the three countries warned that the instability risked spilling over into other West African countries.

Needs are growing, they maintained, amid a five-fold rise in displacement in the last 12 months which has seen more than 330,000 people leave their homes, in addition to 100,000 refugees.

“Many of those affected by the violence now were already facing dire hardship; for them, it’s double devastation,” said Mbaranga Gasarabwe, UN Resident and Humanitarian Coordinator in Mali.

Citing “recurrent” violent attacks by armed groups that are up to four times more common now than in 2012 at the start of Mali’s security crisis – when the north and centre were briefly under the total control of extremists – Ms. Gasarabwe told journalists in Geneva that these had severely hampered the delivery of basic social services to communities, such as education, health, water sector and shelter.

In Mali “more than 1,800 schools have closed and over 80 health centres are either shut or only partially operational”, the UN official said, echoing concerns by her colleagues about service and governance gaps that extremists can be quick to fill.

“We must act now and fast,” added UN Resident and Humanitarian Coordinator in Niger, Bintou Djibo. “Sustained relief efforts, economic and social development are key. In the Sahel, violence is also rooted in a sentiment of marginalisation and disenfranchisement.”

Aid organizations have appealed for $600 million to assist 3.7 million of those most in need, but funding is at around 19 per cent only, for all three countries.

“We cannot stress enough the urgency of the situation. The future of a whole generation is at stake,” said Metsi Makhetha, UN Resident Coordinator for Burkina Faso, referring to attacks by “ISIS-inspired” armed groups, which threatened to destabilize longstanding traditional methods of community-based conflict resolution. “The UN, partner humanitarian organizations and Governments have stepped up operations. But we must do more.”

“The attacks are increasing, the methods are getting sophisticated; we are seeing more and more targeting of civilians,” said Ms. Makhetha “We need even a concerted effort so that we can really create conditions that will enable the communities to strengthen their traditional community links.”