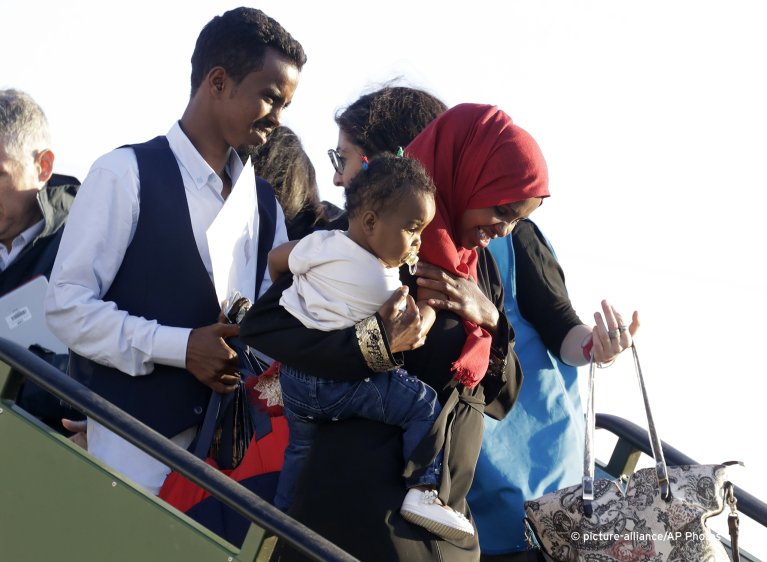 A family of migrants alighting a plane at the Pratica di Mare Air Base near Rome, Italy on April 29th, 2019 | Photo: picture-alliance/AP Photos

Nearly 150 refugees arrive in Italy as factions battle for Tripoli

Nearly four weeks since fighting began near the Libyan capital Tripoli, UNHCR, Italian and Libyan authorities have evacuated 146 refugees to Italy. The refugees were trapped in detention centers near the frontline.

Nearly 150 refugees arrived from Libya at an airport near Rome on Monday, making Italy the first country since renewed fighting broke out near Tripoli to take in people, according to the United Nations.

"It's now crucial that other states match this gesture and offer similar evacuation places for refugees caught up in the conflict," said Filippo Grandi, the UN high commissioner for refugees.

According to the UN refugee agency UNHCR, a "humanitarian pause was coordinated and facilitated with all parties to the conflict to allow for the safe passage of the migrants and refugees."

The evacuation of the 146 people was a joint operation between UNHCR, the Libyan Interior Ministry and Italian authorities. Among those flown to Italy were 46 children who were separated from their families.

The evacuees come from Ethiopia, Eritrea, Somalia, Sudan and Syria, media reports said. Libya is a transit country for thousands of migrants. Even before the most recent fighting broke out, refugees had lived in often inhumane conditions in detention centers there.

On Sunday, Pope Francis had called for the installation of humanitarian corridors for refugees and migrants trapped in Libyan detention centersduring his traditional post-Easter prayer Regina Coeli in Rome. The Pope asked the international community to help evacuate those trapped, "especially the women, the children and the sick, as soon as possible through the safety of humanitarian corridors," the Vatican news service reported on Sunday.

As international organizations are trying to evacuate migrants from the affected areas in and around Tripoli, there are reports of migrants being forced to participate in the fighting. The Irish Times and British newspaper The Telegraph have written of "scores of migrants ..reportedly [being] taken from detention centers, and forced to assist militants aligned with the UN-backed Tripoli government."

According to the UN, over 3,300 people that are being held in centers are now in danger due to the fighting. In an online statement, UNHCR said it has been evacuating refugees and migrants "away from immediate danger, including 500 to our Gathering and Departure Facility in Tripoli and 163 to the Emergency Transit Mechanism in Niger."

As both facilities were "approaching full capacity," however, UNHCR warned that "evacuations directly out of Libya will soon be the only available lifeline for vulnerable refugees." On April 26th, UNHCR and IOM Libya evacuated some 325 refugees and migrants  from the Qasr bin Ghashir detention center to Azzawya, a city on the Mediterranean Sea about 45 kilometers west of Tripoli, where they were at “reduced risk”.

Inspite of Italy taking in 146 refugees on Monday, the populist government in Rome, and especially Interior Minister Matteo Salvini, have taken a hard line against migration by introducing restrictive immigration and security reforms under the so-called Salvini decree and by closing Italy's ports to migrant rescue vessels run by private NGOs.

Italy and the EU provide funds and training to the Libyan coastguard that intercepts migrant boats in the country's search and rescue zone in order to return them to Libya.

Libyan General Khalifa Haftar's offensive began earlier this month and has raised fears of a deterioration of the conflict in oil-rich Libya, where long-time dictator Moamer Gaddafi was ousted and killed in a 2011 NATO-backed revolt.

According to the World Health Organization (WHO), the fighting near Tripoli has so far killed at least 278 people.

With material from dpa

146 migrants land in Italy in UN-organized Libya evacuation - The ..