Berhane and Nadolska are winners at 23rd Vidovdan race in Brcko 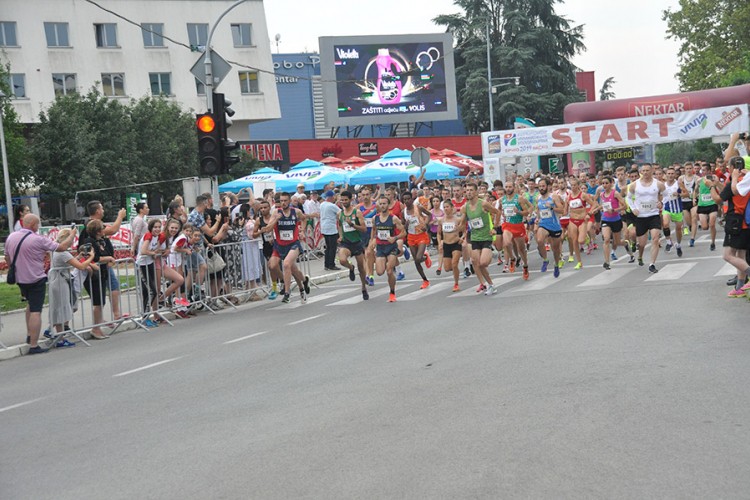 Photo: NN | Berhane and Nadolska fastest in Brcko, more than 4,000 participants
Afewerki Berhane of Eritrea and Polonia Karolina Nadolska winners are the 23rd Vidovdan race in Brcko, and the director of the race Borislav Djurdjevic gave a tenth for the entire event.

On Saturday, Berhane ran for 10 minutes, 29.07 minutes, and the pace increased the last three kilometers. It was followed by Romanian Nikolae Soare until the last 500 meters (29.19), while the third through the goal passed by the Moroccan Murad Marofit (29.44 minutes. Berhane, the first Eritrean winner in Brcko, declared that he enjoyed the race, but that heat and humidity prevented it from being faster.

"We kept ourselves in the World League, which is important, not only for us, but for the region, too. The competitors were excellent, the girls were decisively run in difficult conditions, it was high air humidity and high temperature, but they were excellent. was Brhane, before whom he was a great career, the great surprise was Saore, although he prepared for this race for a year, "said Borislav Djurdjevic, director of the Vidovdan race.

The Vidovdan race was also the Balkan championship. Soareu received gold, the bronze went to Bulgaria's Joli Nikolov, and Junuzovic was third, while athletes Srpkinja Teodora Simovic won in front of the Romanian Roksana Elizabeta Barke and Kristina Simion. Kimani was sixth.

More than 4,000 people from 30 countries ran from the Brčki Street, and from AK Prnjavor it was announced that the club was the most successful with six gold, silver and bronze medals.

"Primary and secondary school pupils, wheelchairs race, we had a Race of Satisfaction in which all were winners, and we also had a competition in crawling babies, bumblebees, cybers ... It was this festival of athletics and sport. we are on the run and proud of the IAAF whose representatives told us that the Vidovdan race for children is the only one in the world that has a soul. The event was for a clean decade, "Djurdjevic said.

Djurdjevic added that around 600 people participated in the organization and thanked all the city services, the Brcko District and RS police, who contributed to the race at the top level.

Nadolska and Berhane victorious in Brcko

IAAF - 23 Jun 2019 00:28
Eritrea's Afewerki Berhane and Poland's Karolina Nadolska impressed at the Vidovdan Road Race, one of the most prestigious road events in Bosnia and Herzegovina, winning at the IAAF Bronze Label road race in Brčko on Saturday (22).
Full Article at IAAF https://www.iaaf.org/news/report/vidovdan-road-race-2019
Back to Dehai News