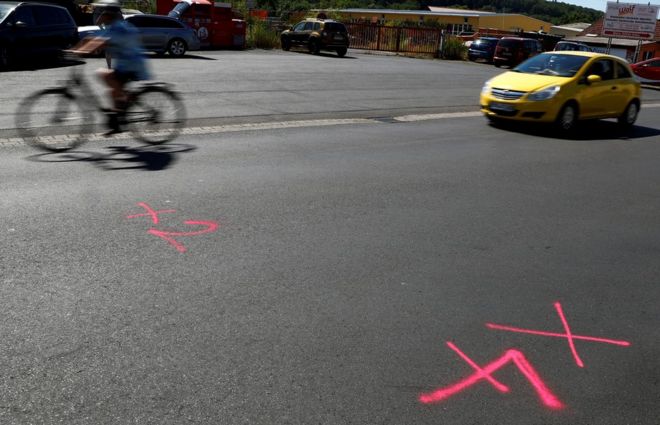 A 26-year-old Eritrean was apparently shot from a car by a man who later died, German authorities have said. Police believe the shooting was motivated by far-right extremism.

shooting in the central German town of Wächtersbach left a 26-year-old Eritrean wounded, with the shooter fleeing the scene. On Monday afternoon, police found the "apparently lifeless" body of the suspected shooter in a car in the neighboring town of Biebergemünd. He shot himself in the head and later died in hospital.

"We are currently working on the assumption of a very clear xenophobic motive," Frankfurt state prosecutors' spokesman Alexander Badle said on Tuesday, adding that the victim, currently in a stable condition following an operation, had apparently been chosen "because of his skin color," and that the dead suspect appeared to have chosen him at random.

A search of the 55-year-old man's home confirmed suspicions of a racist motive, a spokesman said. Investigators found a letter apparently referring to the crime in the apartment, as well as three firearms (a semi-automatic handgun and two rifles, all legally owned). The suspected perpetrator had also recently sold another gun, the spokesman said, which has been tracked down and seized. Two more guns were found in the suspect's car.

The incident happened near Kassel, scene of the killing in early June of the conservative politician Walter Lübcke. The main suspect in that case is Stephan E., a known neo-Nazi who is now in custody. Investigators also noted that the incident happened on the anniversary of the mass-murder of 77 people in Oslo and Utoya, Norway, in 2011, by far-right terrorist Anders Breivik.

"Whether there is a correlation with Breivik is an aspect that is interesting for us," Badle said.

Speaking to news agency dpa, Biebergemünd Mayor Manfred Weber said the dead suspect had been living in the area for two years, and had not drawn attention. "He lived a withdrawn life," Weber said. He was not a member of a local sports shooting club.
No apparent contacts with neo-Nazis

Despite the indications of a racist motive, the prosecutor's spokesman added, "we have no valid evidence that there were contacts to the right-wing nationalist or far-right scene," though he emphasized the investigation was still in its early stages.

Some 400 people attended a vigil at the crime scene on Tuesday evening as a protest against far-right violence. In a joint statement, the town's leaders including Mayor Andreas Weiher said people were invited to "think of the victim and his family, and send a signal against racist violence."

Far-right extremism is currently experiencing a rise in Germany. A report released by the domestic intelligence agency, the BfV, in late June counted some 12,700 "violence-oriented" far-right extremists in the country.

The killing of Walter Lübcke has refocused attention on far-right terrorism in Germany in recent weeks. Stephan E. was known to have links with the international neo-Nazi network Combat 18.
Meanwhile, the German government's commissioner for migration, refugees, and integration, Annette Widmann-Mauz, took to Twitter to draw a connection between the incident in Wächtersbach and the racist hate-speech.

"In the middle of Germany someone shoots at a man from Eritrea," she wrote. "Out of hate speech comes violence, out of hatred comes murder. We cannot and must not tolerate this! For this reason: no relativization, but consistent action against racism and far-right extremism."

Police have said they are investigating a number of social media posts related to the incident.