Up to 150 Dead in Migrant Shipwreck Off Libya

Libyan Red Crescent workers pick up a body of a drowned migrant near the city of Khoms, some 100 kilometers (60 miles) east of Tripoli, Libya, July 26, 2019.

GENEVA - The U.N. refugee agency says up to 150 refugees and migrants are believed to have lost their lives Thursday in a shipwreck on the Mediterranean Sea off the coast of Libya.

If confirmed, the UNHCR says the shipwreak will be the biggest on the Mediterranean Sea since May 2017, when 156 people died off the coast of the Libyan capital, Tripoli.

Close to 140 survivors, mainly Eritreans and Sudanese, were pulled from the water.

Migrants watch the body of their fellow migrant who died after a wooden boat capsized off the coast of Komas, a town east of the capital Tripoli, Libya, July 25, 2019.

UNHCR spokesman Charlie Yaxley says the latest tragedy comes weeks after more than 50 people were killed when a detention center in Tajoura, on the outskirts of Tripoli, was hit in an airstrike.

"In addition to the shipwreck ... a further 87 people were brought back to Libya by the Libyan coast guard, and 84 of them were transferred to Tajoura," Yaxley said. "The total population in Tajoura now numbers nearly 300. This is completely unacceptable, and we call for their immediate orderly release."

There were no search-and-rescue boats operated by nongovernmental organizations in the sea Thursday when the migrant boat ran into trouble, as hard-line governments such as Italy prohibit them from conducting these life-saving missions.

Yaxley says the crucial role of NGO boats must be acknowledged, and their efforts in saving lives must not be stigmatized nor criminalized.

"There also must now be a return of EU state search-and-rescue vessels to the Mediterranean," he said. "We reiterate once again that no return of refugees and people rescued on the Mediterranean should be to Libya because it has no ports of safety."

The UNHCR is calling for more action to arrest and prosecute smugglers and traffickers who profit from people's desperation by facilitating their doomed voyages.

Up to 150 Dead in Migrant Shipwreck Off Libya | Voice of America ...

Migrants rescued from shipwreck off Libya await their fate 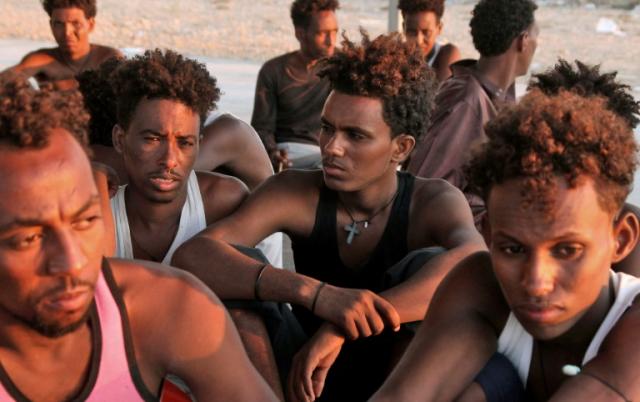 Rescued migrants sit on the coast in the fishing village of Khoms, east of the Libyan capitalAFP

Traumatised African migrants plucked from the sea silently awaited their fate Friday, as a Libyan fisherman said the waters were full of floating bodies after the latest boat sinking in the Mediterranean.

In one of the deadliest shipwrecks this year in the Mediterranean, 145 migrants were rescued but scores of others were feared drowned after their flimsy boat went down off Khoms, 120 kilometres (75 miles) east of Tripoli.

Despite the high number of those missing, estimated at more than 110 by the International Organization for Migration (OIM), the Libyan coast guard does not have the capabilities to launch a high seas search.

"There were bodies floating on the surface of the water where the boat went down" on Thursday, said one of the fishermen who were the first on the scene to rescue survivors.

Libyan navy spokesman General Ayoub Kacem said most of the rescued migrants were from Eritrea, although Palestinians and Sudanese were also among the group waiting to be taken on to reception centres.

In general, humanitarian agencies provide medical care and food for survivors, who are then transported to Libyan detention centres.

About 30 young migrants were squatted on a concrete floor under a metal-roofed structure as shelter from the scorching sun, while women used a mobile home to recover after having spent more than six hours in the water.

Nearby, a single Libyan Red Crescent body bag marked the only victim recovered so far from the tragedy.

"Because we don't have the means, we'll have to wait for the sea to return the bodies so we can pick them up," a member of the coast guard told AFP, asking not to be named.

One of the survivors, Abdallah Osman, recounted how their boat started taking on water about 90 minutes after setting out to sea hoping to reach Europe.

"The Egyptian captain decided to turn back," he said.

A passing ship saw that their boat was in distress but took no action, said the 28-year-old Eritrean.

"We thought they were going to save us but the people on board just looked."

He said their boat filled with water half an hour later and the engine broke down. They spent six to seven hours in the water, during which time men, women and children perished.

The survivors in the water could see the lights of nearby Khoms.

"Shortly after dawn, fishermen came out with their small boats and started taking us to shore, five at a time... That went on until nine in the morning," Osman added.

The head of the UN refugee agency Filippo Grandi tweeted that it was "the worst Mediterranean tragedy of this year".

"Restoring rescue at sea, ending refugee + migrant detention in Libya, increasing safe pathways out of Libya must happen NOW, before it is too late for many more desperate people," he added.

UN chief Antonio Guterres said he was "horrified" by the latest tragedy at sea.

"We need safe, legal routes for migrants and refugees. Every migrant searching for a better life deserves safety and dignity," he tweeted.

Amnesty International lambasted the European Union over the latest deaths.

"This high number represents a new low for European leaders. They have done everything they can to pull up the drawbridge to Europe," it said, "yet people are still risking their lives to come to Europe".

Before the latest shipwreck, the United Nations High Commissioner for Refugees and the OIM said 426 migrants had perished in the Mediterranean this year.

Libya, which has been wracked by chaos since the 2011 uprising that killed president Moamer Kadhafi, has long been a major transit route for migrants, especially from sub-Saharan Africa, desperate to reach Europe.