GWANGJU, July 27 (Yonhap) -- He was born in Eritrea, spent his early years in Gambia, learned how to swim in Kenya and started excelling in the sport in Denmark.

Swimmer Daniel Christian has literally come a long way to compete at his first world championships in South Korea, and he's been trying to savor every moment. 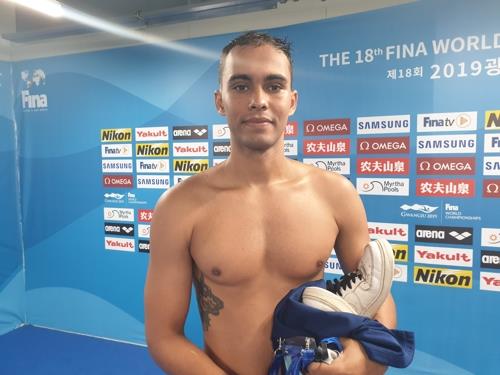 "I've been trying to get to this place my whole life," he said after competing in the men's 100m butterfly preliminary Friday at the FINA World Championships in Gwangju. "Finally getting here is kind of surreal."

The 21-year-old has set a bigger goal for himself that stretches beyond the pool -- inspiring new swimmers in his native land.

His family was split up while Eritrea remained at war with Ethiopia. They battled for more than two years starting in May 1998 but didn't agree to peace until July 2018.

Christian said the countries have been fighting for control of the long coastline in Eritrea that stretches for 1,200 kilometers, and it's ripe for swimming.

"I want to start the culture (of swimming) in Eritrea," said Christian, who moved to Denmark at age 10 and said he hasn't seen his family for some 10 years. "We have 1,200 km of coast. Why not use our open water for swimming along the coast? Once we start swimming, it's going to take off from there."