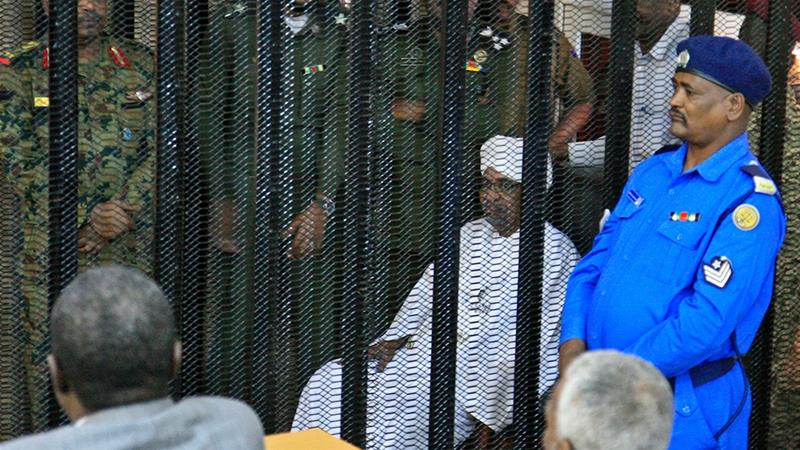 Omar al-Bashir received millions of dollars from Saudi Arabia, a police investigator has told a court in Sudan's capital at the start of the former president's corruption trial months after he was toppled by the military in the wake of mass protests against his autocratic rule.

Al-Bashir, who is charged with illicit possession of foreign currency and accepting gifts in an unofficial manner, admitted to receiving the $90m in cash from Saudi royals, Brigadier General Ahmed Ali testified on Monday.

Nearly seven million euros ($7.8m) was found at al-Bashir's residence, as well as smaller amounts in US dollars and Sudanese pounds, he said.

"The accused told us that the money was part of a sum of $25m sent to him by Prince Mohammed bin Salman to be used outside of the state budget," Ali said, referring to the powerful crown prince of Saudi Arabia.
The investigator said al-Bashir had said he also received two previous payments of $35m and $30m from Saudi Arabia's former King Abdullah, who died in 2015.

"This money was not part of the state budget and I was the one who authorised its spending," Ali quoted al-Bashir as saying. The former president told investigators that the Saudi money was exchanged and spent but he could not remember how, according to Ali. He added that the former president did not have documents providing further details.

Al-Bashir, who was forced from office by months of protests in April, listened to the testimony without commenting as he sat in a metal cage.

He spoke at the beginning of the hearing to confirm his name and age.

When asked about his residence, the 75-year-old laughed and said, "formerly the airport district, at army headquarters but now Kobar prison," referring to the detention complex where he sent thousands of opponents during his 30-year rule.

After the nearly three-hour hearing, al-Bashir's lawyer Ahmed Ibrahim al-Tahir dismissed the accusations, telling reporters it was usual for leaders to hold amounts of foreign currency.

Speaking from Khartoum, Al Jazeera's Hiba Morgan said al-Bashir's lawyers claim the charges against him were not "legitimate because he received the money that was found in his house after he was ousted as president".

"His defence team says the fact that there is a trial against the former president proves that the judiciary is independent, but they are sure he will come out innocent," Morgan added.

The Saudi government communications office did not immediately comment on the testimony.

The next hearing was scheduled for Saturday.

Al-Bashir's trial comes against the backdrop of the country's struggle to form a sovereign council, the first step after the landmark adoption of a transitional constitution.

On Saturday, protest leaders and the military that seized power from al-Bashir signed a final power-sharing deal, paving the way for a transition to a civilian-led government.

Al-Bashir took power in a military coup on June 30, 1989, and stayed in office until April 11, 2019, when he was overthrown and arrested by the armed forces.

His downfall was brought about by thousands of Sudanese from all walks of life who took to the streets for four months to demand an end to his rule.

The demonstrations erupted over rising food prices before morphing into broader demands for political change, the culmination of years of anger over long-standing corruption and repression.

Prosecutors have also opened other criminal investigations against al-Bashir, including on charges of money laundering, financing "terrorism" and "ordering the killing of protesters" - the latter is an offence that carries the death penalty in Sudan.

Before Monday's trial, Amnesty International's Director for East Africa Joan Nyanyuki said in a statement: "While this trial is a positive step towards accountability for some of his alleged crimes, he remains wanted for heinous crimes committed against the Sudanese people."

Over the course of his time in office, al-Bashir led Sudan through several conflicts and is wanted by the International Criminal Court (ICC) for alleged atrocities in the western Darfur region more than a decade ago, in a war that killed an estimated 300,000 people and forced 2.7 million from their homes.

The conflict broke out in 2003 when ethnic minority groups took up arms against al-Bashir's Arab-dominated government, accusing it of discrimination and neglect.

Al-Bashir was also the last man to lead a united Sudan, prior to South Sudan's independence in 2011.