USIP.org: A Year After the Ethiopia-Eritrea Peace Deal, What Is the Impact?

Warming ties are part of a tectonic shift in the Horn of Africa, but the end results are far from certain.

Watch: A year out, has Ethiopia-Eritrea peace had a stabilizing impact on the Horn of Africa?

Ethiopia and Eritrea signed a peace agreement just over a year ago to end two decades of a “frozen war.” The accord, which resolved a seemingly intractable border dispute after Ethiopian Prime Minister Abiy Ahmed took office and accepted an independent commission’s 2002 boundary decision, was greeted with tremendous optimism in both countries and by international observers. Following the first anniversary of the agreement last month, USIP’s Susan Stigant, the director of Africa programs, and Michael Phelan, a senior advisor on Africa, assess the peace deal’s impact on the states’ bilateral relations, Eritrea’s persistent internal policies, Ethiopia’s economic and political development and stability in the Horn of Africa. 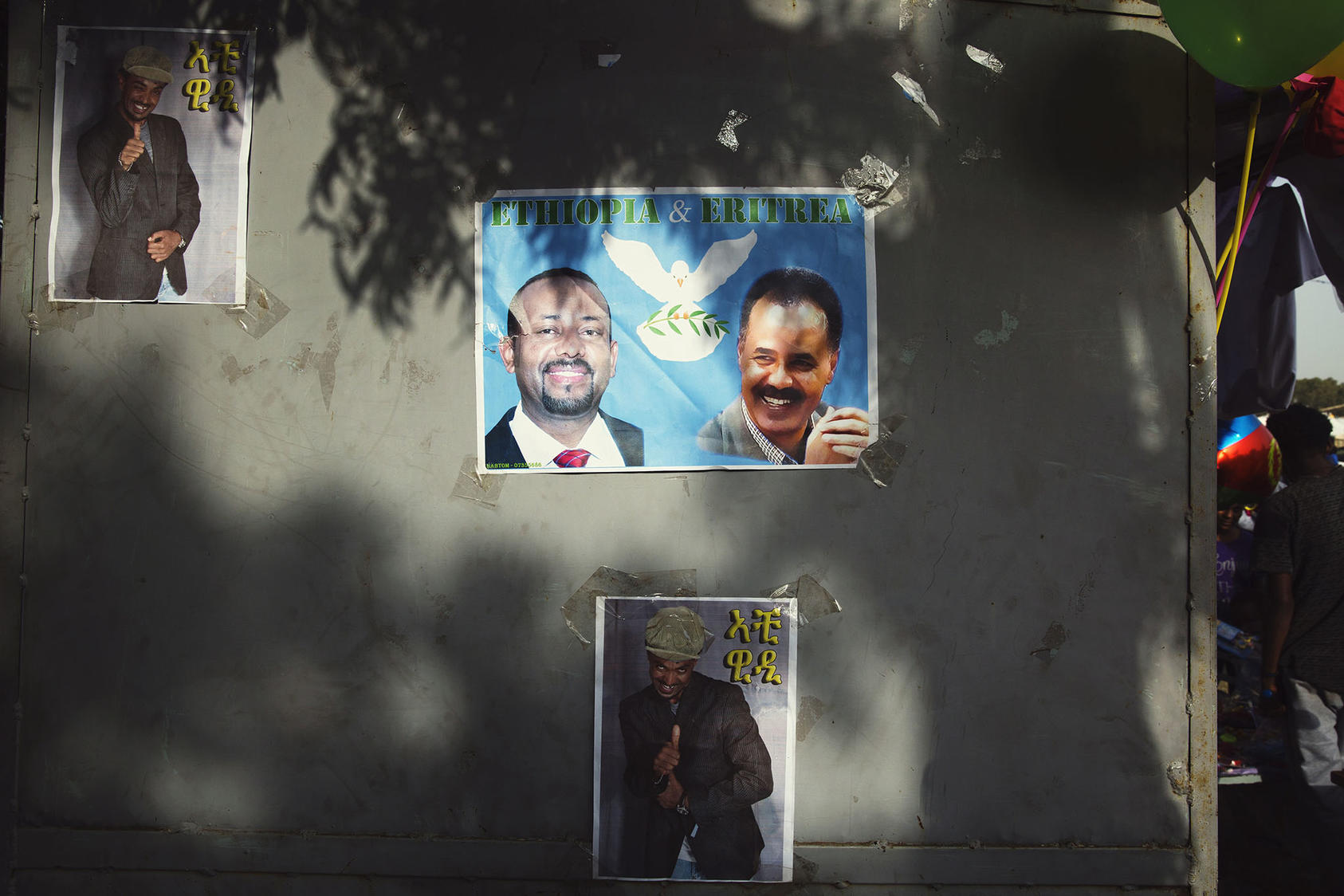 A poster of Prime Minister Abiy Ahmed of Ethiopia, left, and President Isaias Afwerki of Eritrea is displayed during a festival in Asmara, Eritrea, Sept. 7, 2018. (Malin Fezehai/The New York Times)

Q: How has the Ethiopia-Eritrea relationship evolved over the last year?

Phelan: At first it seemed the dynamic and unexpected events in warming relations might break through entrenched resistance. However, this fragile relationship, while improved, has reverted to its norms, minus the looming military threat. While Ethiopia has continued to encourage institutionalizing new trade and travel opportunities with Eritrea, Abiy faces internal politics that have become far more contentious, hampering any further quick advances. Eritrea has reverted to extreme caution around anything that might erode President Isaias Afwerki’s complete control.

In a much-anticipated speech on Independence Day in May, Isaias acknowledged “the beginnings of a new era” but then harkened back to the virtue of resilience and “a patient appraisal of the unfolding reality.” While that doesn’t foreclose a positive and productive relationship, the countries’ respective size and economic dynamism will likely govern the pace at which each is willing to move forward. Ultimately, Isaias has acknowledged the “principal aim is to transform the primordial subsistence economy to a modern and developed industrial economy.”

Stigant: Ending the “no war, no peace” period between Ethiopia and Eritrea remains a historic milestone. The stories of families reunited after decades highlights the deep personal costs of conflict and the immediate possibilities of peace. However, over the past year, people expected that the peace would result in additional, sustainable improvements. And in some cases, progress has now been stalled or even reversed. For example, Eritrea closed the border crossing between the countries again. To date, the peace has largely remained at elite, political levels—and even personalized between Abiy and Isaias. Individual relationships are important to build peace but insufficient—and even risky, if those relationships sour—to sustain peace and avoid a return to conflict in the medium term. There need to be predictable, agreed upon ways to resolve disputes when they arise.

Eritrean authorities have historically justified their restrictive security state by citing the conflict with Ethiopia. A year after the peace deal, has the government lifted its harsh control?

Phelan: In short, no. The renewal of neighborly relations, including Abiy’s express acceptance of the U.N.-brokered 2000 peace agreement delimiting the contentious border, hasn’t loosened Eritrea’s most restrictive policies. The Ethiopia-Eritrea thaw has enabled progress in Eritrea’s regional disputes with Djibouti and Somalia, but Isaias appears less confident in the internal ramifications of the new environment. He continues to insist on slow going, saying “before charting out new and permanent sustainable development programs, it is imperative that we conduct extensive political, economic and security appraisals.”

Stigant: Many in the international community hoped that the Ethiopia-Eritrea rapprochement would help to open new channels of engagement and communication with Eritrea and Eritreans. This is still very much a work in progress. Further dialogue—with the government, academics, civil society, and citizens—will be necessary to fully understand the state of play in the country, explore openings for reform, and identify priorities and barriers to progress.

Q: How has the peace deal affected Ethiopia’s political and economic development?

Phelan: It remains to be seen. While it’s certainly possible Ethiopia will continue to lead the continent in GDP growth regardless of Eritrea, growth would be faster with an open and engaged economy to its north. Ethiopia has already made use of other ports across the Horn of Africa (including Djibouti and Somalia) but Eritrea remains an important outlet as Ethiopia continues to develop. Thus far, there has been more easing of political tensions than sustainable progress on the economic front. The return to Ethiopia of Ethiopian opposition leaders and their armed groups has removed a painful irritant but also exacerbated political disputes that have long bedeviled governance.

The mutual outreach to resolve regional disputes by Ethiopia and Eritrea with Djibouti and Somalia has settled some of the regional tension that has long disrupted relations and international interest in investment and trade. While facilitating the removal of sanctions, these steps are only a part of the regional dynamic. Gulf states have joined the Chinese, and increasingly Russia, Turkey, and Egypt in aligning and investing with individual governments in the region.

Stigant: We know that peace agreements are more successful and most likely to stick when they are inclusive. That means that the groups who have grievances, conflicts or disputes need to be part of the negotiations and agree to accept the outcomes. In Ethiopia, this means that the Tigray region, which has the longest border with Eritrea, needs to play a constructive, active role. To date, this is not the case. Tensions remain significant between Abiy’s federal government and the leaders in Tigray. Without a political settlement first on the roadmap for Ethiopia’s transition—and Tigray’s role in it—it’s hard to guarantee a positive role for Tigray in the Ethiopia-Eritrea accord and lasting peace between the countries.

Phelan: Yes. Eritrea and Ethiopia have been willing to work together toward the resolution of long-standing regional tensions, reportedly agreeing that a more stable Horn of Africa would bolster investor confidence and benefit the region. Eritrea has renewed ties with Djibouti after more than a decade-long border dispute, and with the assistance of Ethiopia, is in talks to resolve additional matters. Eritrea has also renewed diplomatic relations with Somalia, where its support for proxy forces a decade ago resulted in severe U.N. sanctions. After the rapprochement between Asmara and Mogadishu, the U.N. lifted sanctions on Eritrea, although it maintained the arms embargo.

Stigant: The Horn of Africa is experiencing a tectonic transition. But things are far from settled. The Intergovernmental Authority on Development (IGAD) has welcomed Eritrea’s increased regional engagement—largely through the Ethiopia-Somalia-Eritrea Joint Declaration—but has yet to bring Eritrea back as a regular, active participant in the regional organization after a 12-year absence. An agreement may be reached on a new IGAD chair in the coming months (Ethiopia has held the position for over a decade)—but the delay demonstrates just how sensitive regional politics remain.

Consultations led by the African Union and an IGAD Taskforce are animating discussions on priorities and approaches for regional integration, including the relationship with countries on the eastern side of the Red Sea. Eritrea’s willingness to engage constructively and actively is a test of the Ethiopia-Eritrea relationship. While Eritrea has begun to participate in a nascent initiative to establish a “Red Sea Security Council,” championed by Egypt and Saudi Arabia, this notably involves only littoral states and therefore excludes Ethiopia. Ethiopia has been and remains a champion of IGAD, a leader within the African Union, and active participant in global bodies like the United Nations. It’s hard to imagine further consolidation and regional stabilization without Eritrea embracing a more multilateral approach within these bodies.