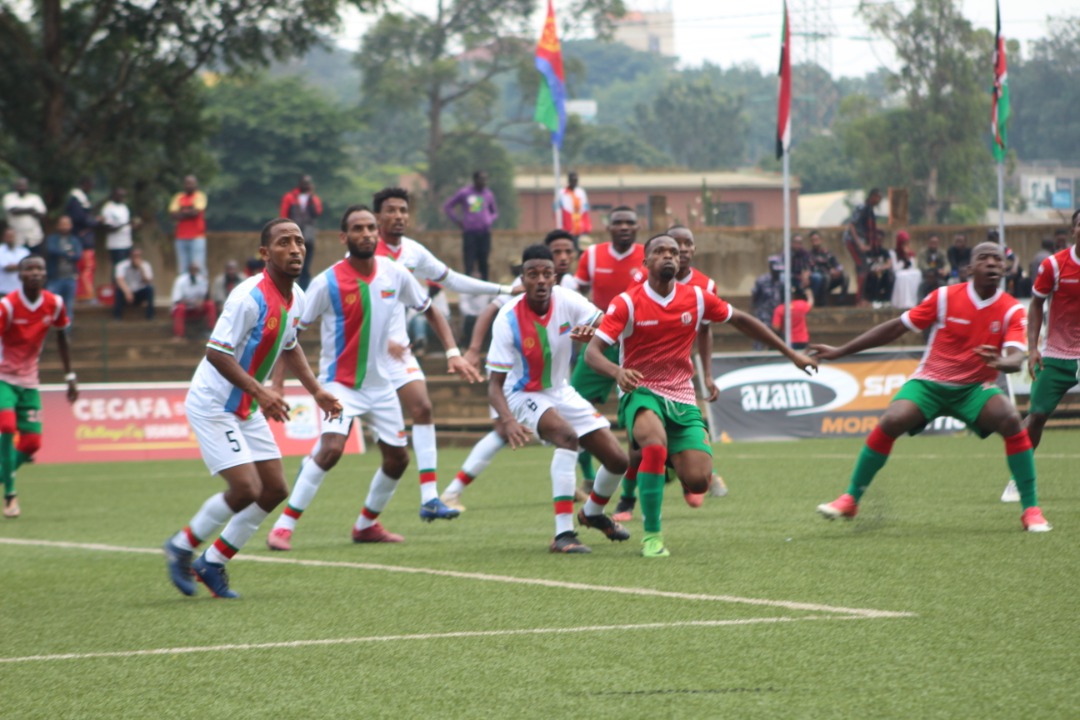 Eritrea provided the shocking result so far at the 2019 CECAFA Senior Challenge in Kampala, Uganda, beating a fancied Burundi side 1-0 in their Group A opening match at the Lugogo Complex on Monday.

The result was a stab in Burundi’s ambition to qualify for the Semi-Finals of the tournament as they must now win both their remaining games and hope the other matches end in their favor. Burundi were beaten 2-1 by Uganda in the opening match.

For Eritrea, the result is a massive boost especially noting this will be their first appearance at the tournament since 2012, when coincidentally the tournament was also held in Uganda. Robel Kidane scored the all important goal for the Eritreans with a goal at the stroke of halftime. Kidane taped the ball home after Ali Suleman Ibrahim’s earlier shot off the counter was blocked by the keeper. It was a goal they fully deserved especially after missing several open chances before that.

Off a counter Deyben Hinteseab broke through on goal from the middle of the pack, but his effort one on one with the keeper hit the upright and the rebound hacked away by the Burundi backline.

Robel Teklemichael also had a similar chance when he also broke free through the middle to face the Burundi keeper one on one, but shockingly placed his shot wide when it was harder to miss than score.

Burundi’s best chance of the half came midway through but defender Filmon Semere cleared the ball off the line after he raced back to cover his goalkeeper when Elphase Ndayisenga’s shot evaded his grasp.
Meanwhile, hosts Uganda enhanced their chances of making it into the last four after picking their second win with a 2-0 victory over a hard fighting Somalia. Impressive 19-year old forward Allan Okello scored both goals for the Cranes as they retained their hold on top spot with six points.
Okello broke the deadlock after 28 minutes when his shot from range took an awkward bounce infront of the Somali keeper, dodging is grasp and skipping into the net. Uganda had scored after having most of the chances.
Somalia had however posed a threat in the opening minute when Hassan Badinur took on a shot from distance, but the effort flew wide. On the other end, Somalia defender Guled Abdirizak cleared the ball off the line after Okello connected to a Mustafa Kiiza corner with an angled header. Kiiza and Paul Willa both tested the Somali keeper with shots from range that he both turned behind for corners.

In the second half, the Ugandans kept their attacking edge and three minutes after the restart, Fahad Bayo who had been kept in close check for most of the game came close but his header from a Kiiza cross hit the bar.

They were however two ahead in the 67th minute when Okello completed his brace with a brilliant curling effort after cutting in from the right.

On Tuesday, defending champions Kenya will qualify for the semi finals if they pick three points against Sudan in the early kick off while Zanzibar will take on Tanzania in a derby in the late kick off. It is such a huge joy for us because coming back to this competition and winning against a good team like Burundi only gives us joy. We worked hard and fought for every ball. Now this result will give us belief that we can actually qualify for the semi finals.

I am very disappointed with my players because the way we played is not the way I expected us to. After losing the first game I expected us to come back better but we couldn’t. We didn’t pass the ball well, in attack we were blunt and it is such a disappointment.

I think the way we played today was a bit lower from how we performed against Burundi, but again you would understand with the nature of the competition where you have to play a game after one day. There were some elements of fatigue and with all these factors, I think we did well and the three points were deserved.

The other times when we come here to play against Uganda, we concede six seven goals and today coming here and losing 2-0 while also creating many chances shows that we are growing as a team. This tournament is a learning step for us and a place where we want to build for the future.