• A Djibouti diplomat posted photos of the country’s delegation for the ACP conference accompanied by UNSC bid captions.

• President Uhuru Kenyatta had on Monday in his opening remarks urged ACP member states to support Kenya’s bid against Djibouti. 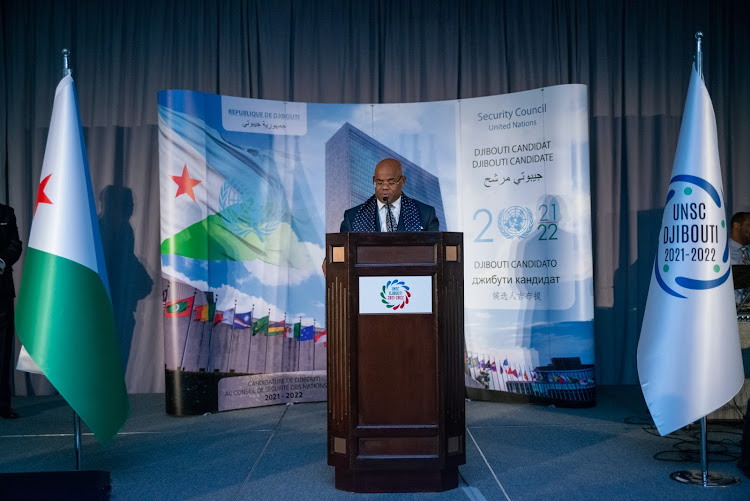 Djibouti Permanent Representative to the UN Amb Mohamed Doualeh during the launch of the country’s bid on December 5 in New York
Image: COURTESY

Djibouti, which is running a parallel campaign for the UN non-permanent seat 2021-22, lobbied for its bid in Nairobi during ninth Africa, Caribbean and Pacific Heads of State and Government Summit in Nairobi.

Hibaa Ismael, Djibouti’s third counsellor in charge of Multilateral Relations in its Kenyan embassy posted photos of the country’s delegation for the ACP conference accompanied by UNSC bid captions.

“The meeting was an opportunity for the PM to Consult with his counterparts and discuss on matters of mutual interests #Djibouti #teamDjibouti #multilateralismmatters #votedjibouti #UNSC20212022”.

President Uhuru Kenyatta had on Monday in his opening remarks urged ACP member states to support Kenya’s bid against Djibouti.

“We have rolled out an elaborate manifesto of what we intend to bring to the United Nations Security Council,” President Kenyatta said.

Kenya has based its bid on a 10-point agenda to campaign for the UNSC seat.

“I am sure your excellencies are well briefed on the matter, and we hope that each of you will respond affirmatively to our request for support,” Uhuru added.

The Netherlands Permanent Representative to the UN in New York Karel van Oosterom was also in attendance.

Kenya launched its bid on November 7.

Djibouti in August rescinded its earlier decision to respect the African Union’s vote to endorse Kenya’s candidature for the UN Security Council seat, signalling lack of faith in a process it participated thrice.

Djibouti argues that the AU disregarded its two paramount principles in selecting its candidates for the security council — rotation and frequency.

“Under these rules, it is undisputable that Djibouti should be the sole African candidate for the period 2021-2022," Doualeh said.

During the launch, he said Djibouti is a reliable partner and has worked with UN member states to advance common priorities. He said the country is “by far the FOSS [Forum of Small States] member with the highest proportion of its national population deployed as peacekeepers”.

“ Owing to its geographic position with regards to the Red Sea, Arabia Sea, Indian Ocean, the Gulf of Aden and its trade friendly location, Djibouti has become a hub for the fight against terrorism, maritime piracy and other transnational threats,” he said in his address.

“It has also served as a hub for global shipping with positive consequences on economic growth and regional stability”.

The last time Djibouti served in the UNSC was in 1993.

In this regard, Douleh said his country “has never shown uncontrolled appetite. It has waited for its turn”.

The rivalry is a repeat of what played out at the 18th Summit of Heads of State and Government of the Non-Aligned Movement in October, where the two states lobbied for their candidacy.