The brazen Shabab assault at Manda Bay, Kenya, a sleepy seaside base near the Somali border, on Jan. 5 left three Americans dead, raising complex questions about the military’s mission in Africa.

WASHINGTON — Armed with rifles and explosives, about a dozen Shabab fighters destroyed an American surveillance plane as it was taking off and ignited an hourslong gunfight earlier this month on a sprawling military base in Kenya that houses United States troops. By the time the Shabab were done, portions of the airfield were burning and three Americans were dead.

Surprised by the attack, American commandos took around an hour to respond. Many of the local Kenyan forces, assigned to defend the base, hid in the grass while other American troops and support staff were corralled into tents, with little protection, to wait out the battle. It would require hours to evacuate one of the wounded to a military hospital in Djibouti, roughly 1,500 miles away.

The brazen assault at Manda Bay, a sleepy seaside base near the Somali border, on Jan. 5, was largely overshadowed by the crisis with Iran after the killing of that country’s most important general two days earlier, and is only now drawing closer scrutiny from Congress and Pentagon officials.

But the storming of an airfield used by the American military so alarmed the Pentagon that it immediately sent about 100 troops from the 101st Airborne Division to establish security at the base. Army Green Berets from Germany also were shuttled to Djibouti, the Pentagon’s major hub in Africa, in case the entire base was in danger of being taken by the Shabab, an East African terrorist group affiliated with Al Qaeda.

“The assault represented a serious security lapse given how much of a target the base was and its location near the border with Somalia,” said Murithi Mutiga, the International Crisis Group’s Horn of Africa project director, based in Nairobi, Kenya.

Many details of the attack remain murky, and the military’s Africa Command has released only scant particulars pending an investigation. But the deaths of the three Americans — one Army soldier and two Pentagon contractors — marked the largest number of United States military-related fatalities in Africa since four soldiers were killed in an ambush in Niger in October 2017. The Kenya attack underscores the American military’s limits on the continent, where a lack of intelligence, along with Manda Bay’s reputation as a quiet and unchallenged locale, allowed a lethal attack.

The deaths also signify a grim expansion of the campaign waged by the United States against the Shabab — often confined to Somalia, but in this case spilling over into Kenya despite an escalating American air campaign in the region. Kenya is a new addition to the list of countries where Americans have been killed in combat since the attacks of Sept. 11, 2001, joining Afghanistan, Iraq, Jordan, Libya, Niger, Somalia, Syria and Yemen.

The attack is raising new and complex questions about the enduring American military mission on the continent, where more than 5,000 troops now serve, especially as the Pentagon weighs the potential withdrawal of hundreds of forces from West Africa to better counter threats from Russia and China. A Pentagon proposal to reduce the American military footprint in Africa drew sharp criticism last week from senior lawmakers of both parties, including Senator Lindsey Graham, a South Carolina Republican who is a close adviser to President Trump.

This article is based on interviews with a dozen American military officials or other people who have been briefed on the attack. Several spoke on condition of anonymity to discuss aspects of a security failure that is now under investigation.

Early on the morning of Jan. 5, Dustin Harrison, 47, and Bruce Triplett, 64, two experienced pilots and contractors with L3 Technologies, a Pentagon contractor that helps conduct surveillance and reconnaissance missions around the world, were taxiing their Beechcraft King Air 350 on Manda Bay’s tarmac. They throttled down their engines, according to one person familiar with the attack. The two men reported that they saw animals darting across the runway.

They were wrong. The animals were in fact Shabab fighters, who had infiltrated the base’s outer perimeter — a poorly defended fence line — before heading to the base’s airstrip. As the twin-propeller Beechcraft, loaded with sensors and video equipment for surveillance, began to taxi, the Shabab fighters fired a rocket-propelled grenade into the plane, killing Mr. Harrison and Mr. Triplett. With the plane on fire, a third contractor, badly burned in the rear of the aircraft, crawled out to safety. 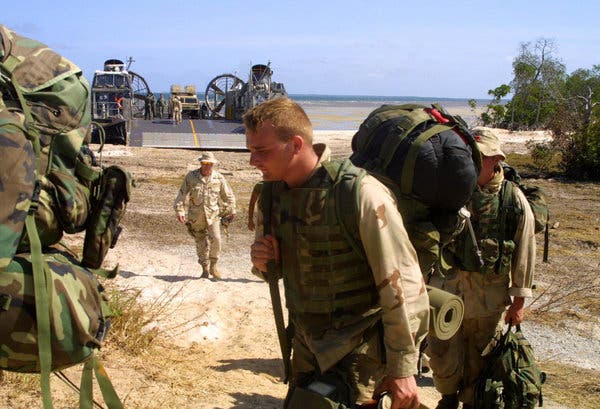 The Shabab fighters were not done. In the ensuing chaos, they made quick work of a significant portion of the American fleet of aircraft — a mix of six surveillance aircraft and medical evacuation helicopters on the ground at the time. The Shabab fighters also destroyed a fuel storage area, rendering the airfield next to useless. The attack most likely cost the Pentagon millions of dollars in damages.

Specialist Henry Mayfield Jr., 23, of the Army was in a nearby truck acting as an air traffic controller when he was killed in the gunfight, according to a person familiar with the incident. His colleague inside the truck, another American, escaped and hid in the grass to avoid the insurgents. He was found hours later.

Manda Bay is at the southern edge of an archipelago of American outposts used in the fight against the Shabab in East Africa. It took about eight hours to fly the burned contractor to Djibouti for hospital-level care, according to the person familiar with the attack, underscoring a recurring vulnerability for American personnel spread across the continent. Two American service members were also wounded in the attack.

While parts of the airfield burned and some Americans who were there returned fire, roughly a dozen members of a Marine Special Operations team from Third Marine Raider Battalion based at Camp Lejeune, N.C., led the American counterattack, alongside several of the Kenyan Rangers they had been training and accompanying during their deployment. But since the team was at Camp Simba, an American enclave roughly a mile from the airfield, the insurgents had ample time to disperse.

At the center of the hourslong gun battle is the risky dependence of American forces on their local counterparts, especially when it comes to base security. The battle bore striking similarity to an attack in Afghanistan in March 2019 when Taliban fighters managed to slip onto a sprawling base in southern Helmand Province with help from Afghan troops, and quickly threatened a small American Marine base inside the perimeter of the larger Afghan facility.

At Manda Bay, where American forces have a smaller presence, the troops rely largely on the Kenyans to protect the airfield. “Those forces are typically not as capable as U.S. forces, and are easier for terrorist groups to infiltrate,” said Representative Michael Waltz, a Florida Republican who served in Africa while an Army Green Beret.

The performance of the Kenyan security forces during and after the battle frustrated American officials. At one point, the Kenyans announced that they had captured six of the attackers, but they all turned out to be bystanders and were released.

There are about 200 American soldiers, airmen, sailors and Marines, as well as about 100 Pentagon civilian employees and contractors, in Kenya helping train and assist local forces. A large majority of them work at Manda Bay, according to military officials. But there were not enough Americans to stand perimeter security on the airfield, one Defense Department official said.

The Kenyan Rangers, alongside their American commando counterparts, often operate in the border region pursuing Shabab fighters. Surveillance aircraft, flying from the airstrip at Manda Bay, watch the border between Somalia and Kenya, a region of unforgiving terrain that has hindered ground operations. In recent months, the border missions against the Shabab have dwindled, and military officials have sought to end the American Special Operations presence at Manda Bay.

Why the base was not better protected is unclear. Surveillance aircraft, much like those destroyed in the attack, are valuable assets, especially in Africa, where extremist groups seek to exploit the vast expanses and porous borders to avoid detection. Even to shuttle a single aircraft from one part of the continent to another often requires approval from a four-star general, and losing a surveillance aircraft, one Defense Department official said, means the loss of hundreds of hours of reconnaissance flights until it is replaced.

The Shabab have typically avoided American outposts and the technological superiority of the American military, instead attacking more exposed Kenyan and Somali troops in the hinterlands.

But that may be changing. On Sept. 30, a suicide bomber detonated a car packed with explosives at the gate of a military airfield in Bale Dogle, Somalia, injuring one American service member.

On Nov. 5, the Shabab released a 52-minute video narrated by the group’s leader, Abu Ubaidah, in which he called for attacks against Americans wherever they are, saying the American public is a legitimate target.

“The recent threats and attacks are likely in part a reaction to the U.S. air campaign against the group,” said Tricia Bacon, a Somali specialist at American University in Washington and a former State Department counterterrorism analyst.

The Pentagon carried out 63 drone strikes in Somalia last year — almost all against Shabab militants, with a few against a branch of the Islamic State. That compares with 47 strikes against the Shabab in 2018. There have already been three strikes in Somalia this year. The air campaign has been shrouded in secrecy, and an investigation by Amnesty International last year reported on evidence that these airstrikes had killed or wounded more than two dozen civilians since 2017.

Since March 2017, the Shabab have launched close to 900 attacks on civilians and hundreds more against United States, Somali and Kenyan troops, the Soufan Center, a research organization for global security issues in New York, said in an analysis last week. An Army Special Forces soldier, Staff Sgt. Alex Conrad, died from wounds he received during a firefight with Shabab fighters in June 2018 in Somalia.

The attack in Kenya came about a week after an explosives-laden truck blew up at a busy intersection in Mogadishu, the Somali capital, killing 82 people. The Shabab also claimed responsibility for that attack.

The group’s strength has ebbed and flowed over the past 15 years, weathering a string of territorial losses, defections and the killing of several high-profile leaders. Even so, the Shabab has proved remarkably resilient, even in the face of an intensified campaign of United States airstrikes against its fighters and facilities, the Soufan analysis said.

It remains unclear how the Shabab fighters made their way onto the Manda Bay base, whether by surprise or a vehicle packed with explosives. According to one American official, the group likely had patiently watched the base and had selected their attack based on the Americans’ well-established patterns. Investigators are looking at the possibility the attackers had help from Kenyan staff on the base, said one person briefed on the inquiry.

American officials said five Shabab fighters were killed. Several others fled, most likely slipping back across the border into Somalia, the officials said.

“This was designed for propaganda, to show they could strike American bases,” said Matt Bryden, the director of Sahan Research, a Nairobi-based think tank. “Their capability to strike in East Africa is growing.”