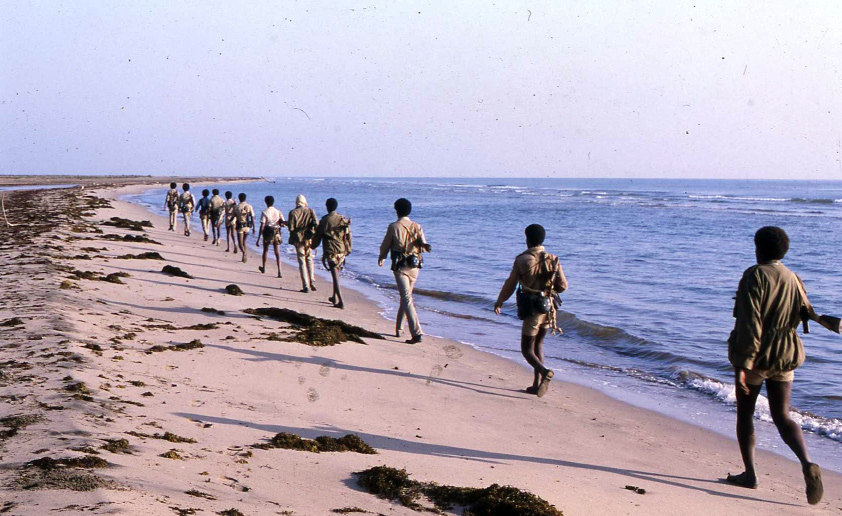 EPLF patrolling the Red Sea shore
By Bereket Kidane
Jan. 6, 2020
Later this week, Eritreans and their leaders will descend upon Massawa to commemorate the fierce battle waged to liberate the port city during the fight for independence.
The 30thanniversary of the Battle of Massawa, also called Operation Fenkil, is a time of pride, gratitude and hope. Pride that the Yikealo generation – the generation that fought and won Eritrea’s War of Independence – had the courage and determination to launch a daring land and sea attack to liberate the port city of Massawa,Pearl of the Red Sea. Gratitude that their self-sacrifice has made it possible for us to realize a long-held dream of an independent and sovereign State of Eritrea. Hope that at last, the Horn region is looking to a future free of conflict and one that is based on mutual trust and cooperation, thanks to the expulsion of the scheming TPLF from the levers of power.
Luckily, there are still many veteran tegadeltisof the Battle of Massawa left and are sharing details of that battle and what Operation Fenkil means to them. The youngest of the EPLF tegadeltis who participated in the 1990 Battle of Massawa are now in their fifties. So the Battle of Massawa has not yet gone from memory to legend because they are still around to tell us about it.
The 1988 Battle of Afabet had already marked a turning point in the EPLF’s favor in the fight for independence. The significance of Operation Fenkil is that it signaled the end of Ethiopia’s illegal occupation of Eritrea in the most vivid way. So vast was the endeavor, so far-reaching its consequences.
The ensuing aerial bombardment of civilians of the port city by the Ethiopian Airforce is still fresh in the minds of the public. The Dergue regime committed horrendous war crimes in the aftermath of the Battle of Massawa when it bombed civilians for seven straight days with the internationally banned cluster bombs.
Watching footage from the Battle of Massawa one can easily tell that the breadth and scope of Operation Fenkil were gargantuan. It was the largest tank battle fought on the African continent between two opposing armies. The sheer number of troops and tanks the EPLF assembled for the offensive were enormous. The logistical preparations it undertook were extraordinary.
Operation Fenkil was launched in the pre-dawn darkness on February 8, 1990. It was fought on multiple fronts. By the third day, it succeeded in completely routing the enemy out of its heavily-defended strongholds in the port city and the islands around it. The young EPLF Navy operating a flotilla of speed boats provided critical support and firepower by destroying and sinking ships anchored around Massawa Harbor.
Operation Fenkil is a veritable milestone in Eritrean history. It is rightly being memorialized for the great strategic victory it was and what it accomplished in paving way for a sovereign Eritrea.
Operation Fenkil was not only another turning point in the armed struggle for independence, it is also a major historic event in Eritrea’s history.
Soource: Madote.com
Back to Dehai News