SAIIA.org.za: Turkey and the shifting geopolitical sands of North and East Africa 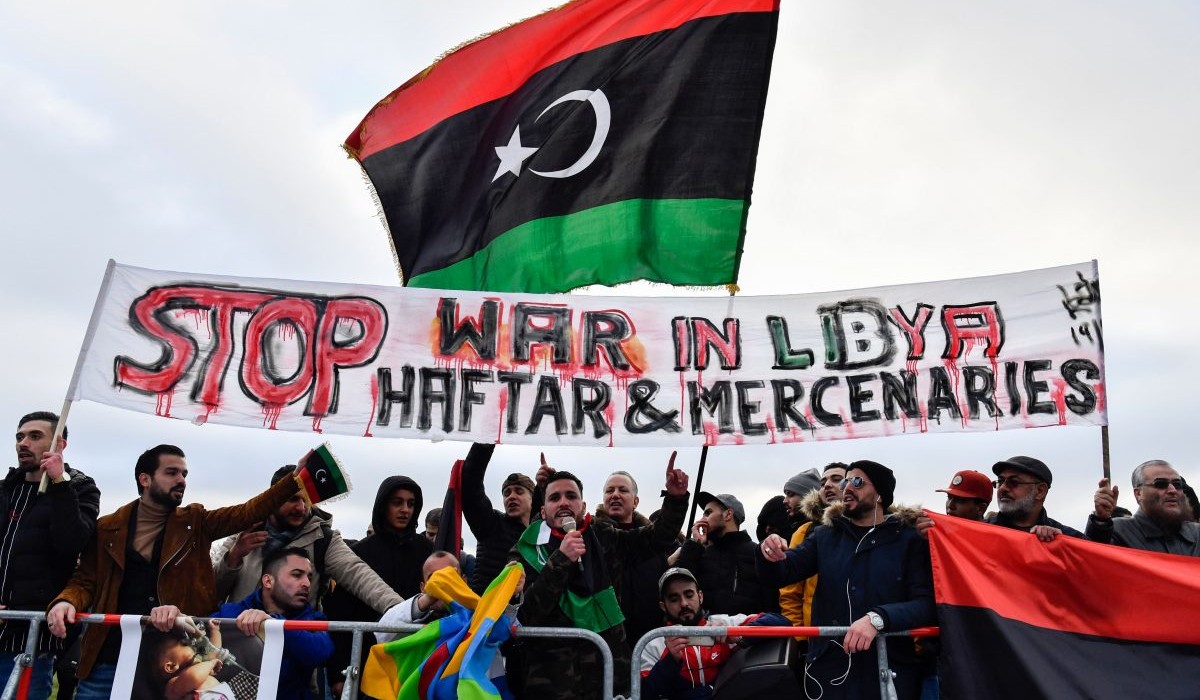 Protesters hold a banner reading "Stop war in Libya, Haftar and mercenaries" during a protest near the chancellery during the Peace summit on Libya at the Chancellery in Berlin on January 19, 2020. Image: Getty, John Macdougall/AFP

In the last few months Turkey’s actions in North Africa and the greater Middle East have confirmed it as an important regional power.

These efforts have been spurred by its desire to make up lost ground in its greater region where it has felt increasingly isolated, especially after its incursion in Syria. Its historical tensions and conflicts with Greece and Cyprus were compounded by the cooperation between them and Israel and Egypt on gas exploration in the eastern Mediterranean. In January, Cyprus, Greece and Israel signed the EastMed pipeline agreement. Turkey’s support for the Muslim Brotherhood in Egypt has also not endeared it to President Abdel Fatah el-Sisi’s government.

Turkey’s efforts to re-assert its influence, particularly in the Maghreb, accelerated in the dying days of 2019. In late November, Turkey signed two memoranda of understanding with Libya, the first on military cooperation and the second on delimiting the EEZ (Exclusive Economic Zone) between them, in an area of the Mediterranean where the disputes over exclusive economic zones between Greece, Cyprus and Turkey remain unresolved. On Christmas Day, the unannounced visit of President Recep Tayyip Erdogan to Tunisia and in early January to Algeria demonstrated his intention to persuade both countries to join Turkey in supporting President Fayez al-Sarraj of the Government of National Accord (GNA), the UN-recognised government, against General Khalifa Haftar’s rebel Libya’s National Army (LNA). Tunisia, however, maintained its position on non-interference, while Algeria’s ability to become involved in the Libyan crisis has been severely undermined by persistent domestic instability. Tunisian backing was essential if Turkey was to provide air and naval support for the GNA. After the visit of Turkey’s foreign minister to Algeria in early January, the newly elected president Abdelmadjid Tebboune publicly stated that Algeria opposed any form of foreign interference in Libya. For President el-Sisi, General Haftar is anti-Islamist and a military strongman in his own mould.

Two important events that took place simultaneously by coincidence on 8 January, one in Istanbul and the other in Cairo, demonstrate how complicated the political chessboard in North Africa and the Near East has become, even before the assassination of the Iranian commander Qasem Soleimani in Baghdad by a United States air strike. In Istanbul, President Putin and President Erdogan made an appeal for a ceasefire in Libya, where Russia supports the LNA of General Khalifa Haftar and Turkey backs President Fayez al-Sarraj of the GNA. Haftar, who initially rejected the appeal, later participated in a conference in Moscow, but he left without committing himself to a ceasefire. Even though Turkey and Russia are opposed in Libya, they have significant common interests. Erdogan and Putin met in Istanbul in order to inaugurate a gas pipeline that serves both countries. Before the ceremony, they had a meeting behind closed doors and discussed the high tension created by the US-Iran confrontation. In addition to their political bonds, the economic cooperation between them is very impressive, especially in the energy field. In the words of Erdogan, “Turkey wants to become an international energy hub.”

On the same day in Cairo, the foreign ministers of Greece, Cyprus, Egypt and France, issued a joint communique stating that the two memoranda signed by the GNA and Turkey undermined regional stability. They declared them null and void. They also condemned the illegal activities of Turkey in the exclusive economic zone of the Cyprus Republic. The Italian foreign minister missed the meeting because his airplane had a mechanical problem, but he had no intention to sign the joint communique and had already made clear that Italy had decided to remain neutral. Italy has supported the UN-backed government of al-Sarraj.

The Berlin conference on Libya held on 19 January, was a diplomatic effort by Chancellor Angela Merkel to diffuse a worsening situation. The main objectives of the Berlin conference were, first, to stop the increasing number of secondary actors who supplied the warring sides with arms and personnel; and second, to achieve a ceasefire. It was a feeble start and the only achievement was the agreement for a follow-up meeting in order to set up four working groups. The most significant concern of the EU, mostly of Germany and Italy, remains the potential refugee tsunami if the Libyan civil war continues.

What these developments have illustrated is the central role that Turkey and Russia occupy in any diplomatic initiative in Libya. The EU does not have the ability to achieve a breakthrough and follows meekly behind them, and it is unclear whether the AU’s High Level Committee on Libya, chaired by Congo-Brazzaville’s Denis Sassou Nguesso will be able to exert the requisite pressure on external actors to observe the UN arms embargo and support the All-Libyan Forum intended to find an internal solution.

Turkey’s involvement in African affairs goes back several years. In the Horn of Africa, an arena of great power conflicts, a new rivalry is developing. Since the Gulf crisis in 2017, Saudi Arabia, the United Arab Emirates, Bahrain and Egypt are confronting Qatar and its ally Turkey in the Horn of Africa. Erdogan is accused of promoting a neo-Ottoman revival, when the Ottoman Empire dominated those lands. He first visited Mogadishu in 2011 – the first non-African leader in Somalia’s capital in 20 years. What began as a humanitarian initiative, gradually grew into a comprehensive involvement that included development projects and a leading role in assisting the war-torn country. Today, Turkish firms operate airports and sea ports, fill the markets with their products and Turkish Airlines flies to Mogadishu, the first major international airline to do so. Somalia represents the epitome of Ankara’s ambitious “Open to Africa” policy. It now has 42 embassies in Africa and 54 Turkish Airlines destinations. Sudan, another country with a Muslim majority in the Horn with a history of Ottoman influence, was controlled until recently by a repressive government with historic ties to the Muslim Brotherhood. Erdogan maintained a close relationship with ex-President Omar al Bashir. After al-Bashir’s overthrow, Turkey is struggling to readjust its relations with Sudan.

Nevertheless, its political and economic investments in the Horn and North Africa mean that it will continue to be a significant player, using various instruments, to secure its interests. The AU (and South Africa that chairs the body in 2020) will have to navigate this terrain carefully in trying to secure a sustainable diplomatic solution in Libya.