Consistently consistent. The Eritrean people and gov’t harbored neither animosity nor wish instability and disintegration to fall upon Ethiopia. The TPLF are still resentful to this principled stance as it has been the only obstacle to fulfill their agenda of creating an independent “Tigray Republic” by seceding from Ethiopia.

Such a stance has been anathema to the TPLF leadership mainly because it perceives it as a reason for its unfulfilled objective of “Greater Tigray”. For more than two decades, the kleptocratic TPLF leadership dominated the political landscape in Ethiopia through a Federal arrangement, a euphemism for a “divide and rule policy”.

Such a political structure enabled it to monopolize political power and deplete the country’s economic and financial resources. Inevitably, the massive resentment among the population due to the discriminatory and oppressive political and economic conditions, gradually morphed into a sustained popular uprising. In keeping with its tyrannical propensity, the narrow clique continued to take draconian measures including cold-blooded killings, torture and massive imprisonment.

Additionally, with the tacit approval of the West, the commitment of crimes against humanity went on unabated for more than two decades. The narrow TPLF clique was also actively engaged in concocting nefarious pretexts to diplomatically isolate Eritrea and drive a wedge between its people and the government. The unprovoked military invasion in May of 1998 was the culmination of the clique’s aggressive predisposition.

In collusion with other governments in the region, it created a contrived border conflict with Djibouti and left no stone unturned to forge regional alliances such as the Sana Forum and IGAD to further impose a diplomatic isolation on Eritrea. Successive US governments and European nations became complicit in this conspiratorial activity by abusing their respective influences at the UN. The imposition of the illegal and unfair sanctions in 2009 and 2011 through the UNSC and ludicrous accusations of human rights violations through the HRC are reprehensible actions taken by these international organizations.

To further enable the corrupt dictatorial regime, they touted it as a regional anchor, provided it with unfettered diplomatic cover and squandered massive economic support. Such myopic actions, aimed at protecting their economic and diplomatic interests in the region, emboldened the regime to invade neighboring nations and continually threaten Eritrea with regime change.

"Our position is not ambivalent. We strongly believe that the policy of institutionalized ethnicity is toxic & obsolete. In our view, eradication of this malaise will serve the best interests of Ethiopia. Furthermore, Eritrea & the whole region will benefit from this."

As the economic and political conditions in Ethiopia deteriorated, massive social upheavals particularly among the youth ensued and the country was on the verge of experiencing a full-blown social implosion. A catastrophic situation was averted mainly due to Prime Minister Abiy’s contrition with regard to domestic problems and a bold decision in so far as the Eritrea Ethiopia Border Commission’s “final and binding” decision was concerned.

As a result, the kleptocratic clique was rendered totally inconsequential in the new political discourse in Ethiopia. Important contributing factors to the collapse of the TPLF regime were the admirable patience and display of visionary political and diplomatic policy by the Eritrean Government, despite TPLF’s continual military provocations and diplomatic intrigues.

Stripped of its domestic political power and diplomatic influence in the international arena, the clique, in keeping with its past behavior, began devising and financing clandestine activities aimed at undermining the fledgling peace between Eritrea and Ethiopia and scuttle the unprecedented reconciliation effort between the two peoples.

In spite of the protracted oppression and atrocities that the Eritrean people suffered at the hands of successive Ethiopians governments, for the EPLF, the government of Eritrea, and the Eritrean people magnanimity has been a virtue consistently displayed both towards Ethiopia and its people as well as the international community.

Interview with President Isaias Afwerki: Part III-Regional Issues
"Inevitable consequence of politicized ethnicity is fragmentation does not stop at large building blocs. It cascades down to clan & sub-clan levels even within 'unitary' ethnic constituency"http://www.shabait.com/categoryblog/30179-interview-with-president-isaias-afwerki … 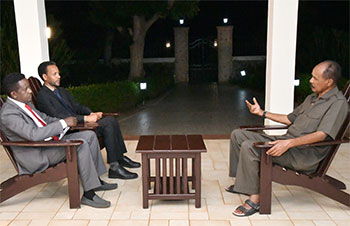 The Eritrean people never harbored any animosity towards the people of Ethiopia and neither did they ever wish instability and disintegration to fall upon their country. Historical evidence abounds to illustrate this point.

Since it is beyond the scope of this paper to delve deeply into this issue, suffice to mention EPLF’s policy toward Ethiopian POWs and the humane treatment that the defeated and demoralized Ethiopian soldiers received from the Eritrean civilian population as they tried to frantically escape west to the Sudan and south to Ethiopia.

Additionally, the support that the EPLF and currently the government have been providing to the Ethiopian opposition groups have been clearly predicated upon maintaining the territorial integrity of the country and advancing social harmony among its people.

However, the fact that, for generations, the people of Eritrea have always been keenly tuned to their collective historical experience should be underscored. The continual sweet talk from Mekelle, the capital of Tigray region of Ethiopia, will never hoodwink the people of Eritrea. Its repeated failed attempts to orchestrate regime change, the illegal expulsion of 70,000 innocent Eritreans and Ethiopians of Eritrean descent, the robbery of their financial and material resources, the sadistic atrocities committed against innocent civilians and persistent frantic efforts to bring about international diplomatic isolation on Eritrea will remain permanently etched in their individual and collective memories.

So, this is the historical context within which the recent diatribes in response to PIA’s principled and consistent message, should be interpreted. One hopes that the clarion call from the Honorable President will be heeded to avert a social implosion in Ethiopia and the inevitable dire consequences in the region.

Finally, the hypocritical statements emanating from Mekelle, including the preposterous call for the Eritrean Defense Units to defect to Tigray and the duplicitous claim that Tigray is a safe haven for Eritreans, are nothing else but a clear indication of the paranoia and fatalism that pervade among the TPLF leadership.