ModernDiplomacy.eu: Visualising Ethiopia’s Economic Leadership (and Challenges) in the Horn of Africa 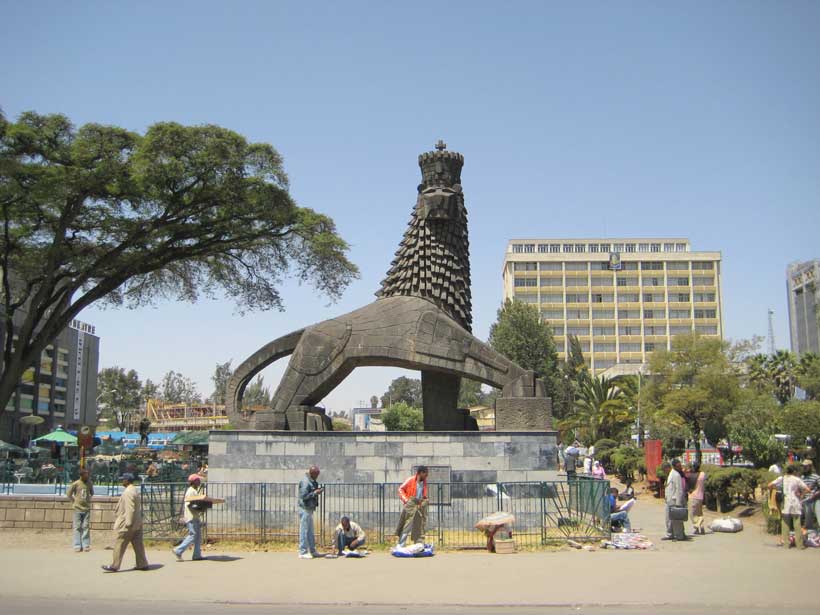 The Horn of Africa has historically been one of the world’s most unstable regions, with internal strife, secessionism, interstate war, terrorism and piracy dominating the region for the latter half of the twentieth century, and the early years of the twenty-first. Things have changed in more recent times, however. But in recent years, the pattern which perhaps best defines the region today is uneven economic growth, and thus cause for cautious optimism.

This is demonstrated by the five charts below, tracing the GDPs, GDP growths, unemployment rates, different levels of mobile phone access, and estimated GDP growth for 2020 (in the wake of COVID-19) of the four countries in the region; Djibouti, Eritrea, Ethiopia, and Somalia. Particularly noticeable is not only Ethiopia’s size but also the rate of its growth when compared to its neighbours, though the country has several points of vulnerability.

The first chart shows the enormous gap between Ethiopia and the other three countries that neighbour it. Leveraging on its population (of more than 108 million people), its physical size and relative stability since the 1990s, the country has been able to grow despite its landlocked status, history of civil war, famines, ethnic tensions, and significant lack of mineral resources. Successfully diverting its exports to the port of Djibouti after the war with Eritrea in 1998, the country’s total GDP is about eight times the other countries in the region combined. Somalia, the state with the second-largest GDP, has a GDP 18 times smaller than Ethiopia’s. This gap is only set to expand, given the differences in GDP growth visualised in the second chart.

In terms of GDP growth, the whole region has registered considerable amounts, with three of the fastest-growing countries (Ethiopia, Eritrea, and Djibouti) registering more than 7% in GDP growth per annum. Ethiopia is present here as well, being the fastest-growing economy in 2019. Moreover, growing from a comparatively higher base ($91.1 billion compared to Djibouti’s $2.9billion, Eritrea’s $2.6billion and Somalia’s $4.7billion), the country’s growth is unparalleled in real comparative terms.

Ethiopia also observes the lowest unemployment rate in the region, with less than 2% of its workforce out of employment. The principal sources of employment are agriculture (72.7%), followed by services (19.9%) and industry (7.4%). The country has been on an industrialising spree, with industrial parks as the principal strategy of attracting foreign direct investment geared towards light manufacturing of textiles, automobiles, and metals processing. Like most countries in the early stages of economic development, however, the country’s wages are still quite low. Nevertheless, if the trajectory of similar countries (most notably China) is anything to go by (and all other things being equal), this is set to transform over the next number of decades as the country ascends to middle-income status. Moreover, the low-wage factor has been one of the country’s major points of FDI attraction.

Mobile phone access in Ethiopia is also the strongest in the region, with more than 56% of its population having at least one mobile phone. The country’s telecommunication industry is dominated by Ethio Telecom, the government-operated monopoly.

The effects of COVID-19 are unclear, but they will short-circuit many developing countries’ economies. IMF revised estimates place the region’s prospects quite favourably nonetheless, with Eritrea estimated to grow by 7.9%, followed by Ethiopia and Somalia at 3.2%, and 1.3%.

For all its strengths, however, Ethiopia is also marked by some vulnerabilities from outside as well as within. Firstly, the country’s GDP per capita of $953 is dwarfed by Djibouti’s $2,787, although it still outranks Eritrea ($332) and Somalia ($348).Secondly, most of its trade is not with its neighbours. While most of its exports are through Djibouti, the country has almost no interdependence with Eritrea and Somalia. This means most of its growth and the growths of its neighbours are not intertwined, despite the impetus for regional integration. Indeed, the country has previously gone to war with two of its neighbours – Somalia and Eritrea – over disputed territory. With talks over the disputed Badme region came the prospect of the port of Massawa, however. These leaves open the prospect that the country’s channels of export will be further enhanced, especially its noticeable industrial base in its north. However, reports of local communities on preventing soldiers from retreating (and thus re-opening the border) indicate that the path to interdependence will require trust-building and may perhaps not be easily divorced from domestic politics of either side. Ethiopia’s goal of energy self-sufficiency in electrification through the waters of the Blue Nile (which commences in Ethiopia’s Lake Tana) are also cause for tense relations with Egypt, with the timeframe of the filling-up of the dam being a particular bone of contention. Given these tensions, it is sensible that most of the work with which the regional body, IGAD, is preoccupied with peacebuilding in Somalia more than with economic issues.

COVID-19 has also put on hold one of the most anticipated elections in recent Ethiopian political history. The country’s Prime Minister, Abiy Ahmed, who took over an uncompleted term of his predecessor Hailemariam Desalegn, is seeking to obtain a fresh mandate of his own. Not only does the election mark the first electoral run of the newly formed Prosperity Party, formed after the consolidation of the previous coalition of ethnic-based parties (Ethiopian People’s Revolutionary Democratic Front), but also some economic policies. Importantly, however, the northern-based Tigray People’s Liberation Front has not taken part in the merger. The next election will, therefore, be an implicative one for Ethiopia’s future growth and future role in the region.

Bhaso Ndzendze is the Research Director at the University of Johannesburg-Nanjing Tech University Centre for Africa-China Studies (CACS). His research interests include international economics, security studies, and International Relations methodology and he has taught and written on Africa-China relations, the politics of the Middle East, soft power, and the war on terror among other topics at the University of the Witwatersrand. His work has appeared in numerous journals and in the popular press including Business Day, Mail and Guardian, The Sunday Independent and The Mercury among others. His most recent publication is the Beginner’s Dictionary of Contemporary International Relations.