Italy has authorized 180 migrants rescued from the Mediterranean to disembark from a ship managed by a charity.

The decision comes after a deadlock that lasted more than a week.

The Ocean Viking, operated by the rescue group SOS Mediterranean, declared a state of emergency on Friday, citing fears for the safety of the migrants and the crew.

The migrants are expected to be transferred on Monday to a government ship in Sicily and will be quarantined for 14 days.

Doctors have already tested those of the Ocean Viking for Covid-19. The results are expected on Monday.

The migrants come from various countries, including Pakistan, Eritrea and Nigeria. They fled the Libyan coast when they were rescued in four separate groups between June 25 and June 30.

They include 25 minors, most of whom are not accompanied by adults, and two women, one of whom is pregnant.

The ship was awaiting authorization to allow passengers to leave the ship in Italy or Malta.

Over time, the people on board had become desperate to reach land – while others, unable to contact friends and family to let them know they were safe, had become distraught, reports the agency. AFP press release.

A doctor from SOS Mediterranean said he had found “enormous psychological discomfort on the ship”, where the situation was “almost out of control for the guests and the crew”.

A crew member said that there had been a series of suicide fights and threats.

A source from the Italian Interior Ministry told AFP that a medical team had been sent to the ship before the landing.

” We are very happy! We have come a long way, Libya was like hell and now at least we can see the end. I have to tell my family that I’m still alive, ”said a 27-year-old passenger. -old Rabiul from Bangladesh.

SOS Mediterranean wrote on Twitter that “the unnecessary delay in this landing has put lives at risk”.

Last year, more than 110,000 migrants attempted to cross the Mediterranean. More than 1,200 died in the attempt, according to the International Organization for Migration.

It is believed that warmer weather in summer could lead to an increase in the number of attempts. 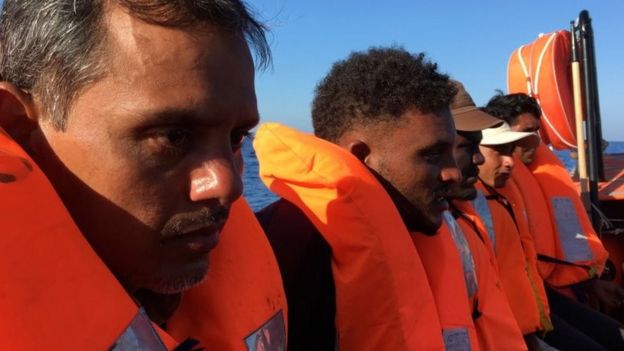 AFPThe migrants were rescued while fleeing the coast of Libya