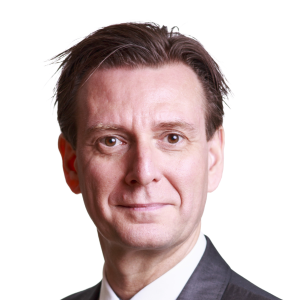 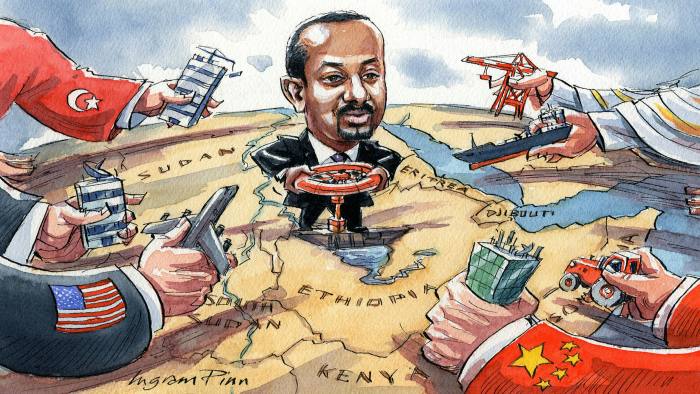 © Ingram Pinn/Financial Times
In a few weeks, Ethiopian engineers will start the multiyear task of filling with water the Grand Ethiopian Renaissance Dam, Africa’s largest hydroelectric power plant and the most ambitious attempt to harness the power of the Nile in history. Eventually, the $4.8bn project will double Ethiopia’s generating capacity and provide a jolt of electricity that could energise what is already the most dynamic large economy in sub-Saharan Africa.
The dam has not only raised tensions with Egypt, which fears losing control over a waterway that has shaped its destiny for millennia. It has also put the spotlight on a region, the Horn of Africa, that has become a magnet for outside attention, not to say interference, from a plethora of powers including the Gulf states, Saudi Arabia, China, Turkey and the US. They have brought billions of dollars in investment in ports, airports, rail, agriculture and education. But, as so often before, they have also projected their own rivalries on to a region with plenty of its own divisions.
At the core of the Horn is Ethiopia, whose population of 110m dominates a region that includes, in its narrow definition, the far less populous countries of Djibouti, Eritrea and Somalia, plus the self-declared independent entity of Somaliland. Ethiopia, a Christian state since the fourth century, resisted European imperialism, making the Horn what Christopher Clapham of Cambridge university calls the only “non-colonial” region of Africa.
Instead, Ethiopians from the highlands over centuries drew their own borders through imperial conquest, incorporating swaths of territory and sowing resentments that fester to this day. Just this month, the government sent troops on to the streets and shut down the internet in response to ethnically charged tensions.
Ethiopia had what Murithi Mutiga of the Crisis Group calls “a bad 20th century”. Its decline culminated in the Red Terror perpetrated by the Marxist Derg regime, which overthrew Emperor Haile Selassie in 1974, and the famines of the mid-1980s, which made proud Ethiopia a symbol of the failed African state.
Yet since 1991, when the Derg was overthrown by a revolutionary army, Ethiopia’s fortunes have been revived. For the past 20 years, its economy has grown annually at close to 10 per cent. This has transformed what had been one of the world’s poorest states into a country with a fighting chance of reaching middle-income status by 2025, despite its own deep political instability. The mega-dam on the Blue Nile, financed by patriotic bonds, is a potent symbol of Ethiopia’s renaissance.
Still, for all its potential, neither Ethiopia, nor the Horn in general, has been a story of steady progress. Far from it. Ethiopia’s liberation from the Derg was swiftly followed by the loss of its coastline after the secession of Eritrea two years later. In 1991, Somalia, a country of mainly nomadic pastoralists resistant to the concept of a centrally controlled nation state, plunged into decades of bloody anarchy after the collapse of the Siad Barre dictatorship, which had been supported first by the Soviets and later by the Americans.
Foreign powers have always been drawn to the Horn because of its proximity to the Red Sea, which controls access to the Suez Canal. In recent years, Gulf states have revived their centuries-old connections. China has invested heavily, pouring billions into Ethiopia in spite of its lack of physical resources, and establishing a military base in neighbouring Djibouti. Beijing also financed and built a semi-functional railway between Djibouti and Addis Ababa, helping strengthen Ethiopia’s link to the sea following its loss of Eritrea.
Yet political actors in the Horn have never been passive victims of external interference. Instead, they have sought to profit from foreign interest by pitting one external actor against another.
The commercial hub of Djibouti, formerly French Somaliland, is a case in point. Situated on the Bab el-Mandeb Strait, a chokepoint separating the Gulf of Aden from the Red Sea, it now hosts the military bases (for a price) of the US, China, Japan, France and Italy. In 2006, Dubai-based DP World constructed a container port in Djibouti only to have it seized in 2018.
Meanwhile, along the African Red Sea coast there has been a scramble for coastline with Turkey, the United Arab Emirates, Qatar and Ethiopia itself taking stakes in competing ports.
As if all these shifting allegiances were not enough, Ethiopia has undergone a political earthquake. In 2018, after years of unrest, Abiy Ahmed became prime minister, promising democracy, a more open economy and peace with Eritrea. Since then, the US has seen a chance to prise Addis Ababa away from what it regards as China’s malignant influence. It has held out the prospect of big investments if the government goes through with market reforms. Under pressure from Saudi Arabia and Egypt, Washington is also urging Ethiopia to sign a water-sharing agreement to allay Cairo’s fears over the Nile.
Mr Abiy has a restive, fractured state to contend with. Soon he will need to fight a difficult election that was postponed because of Covid-19. The last thing Ethiopia’s leader wants is to appear weak in the face of external pressure. The Grand Ethiopian Renaissance Dam will be filled, water-sharing agreement or not. In the Horn of Africa, outside interference only gets you so far.
david.pilling@ft.com

Ethiopia's Nile mega-dam is changing dynamics in Horn of ...