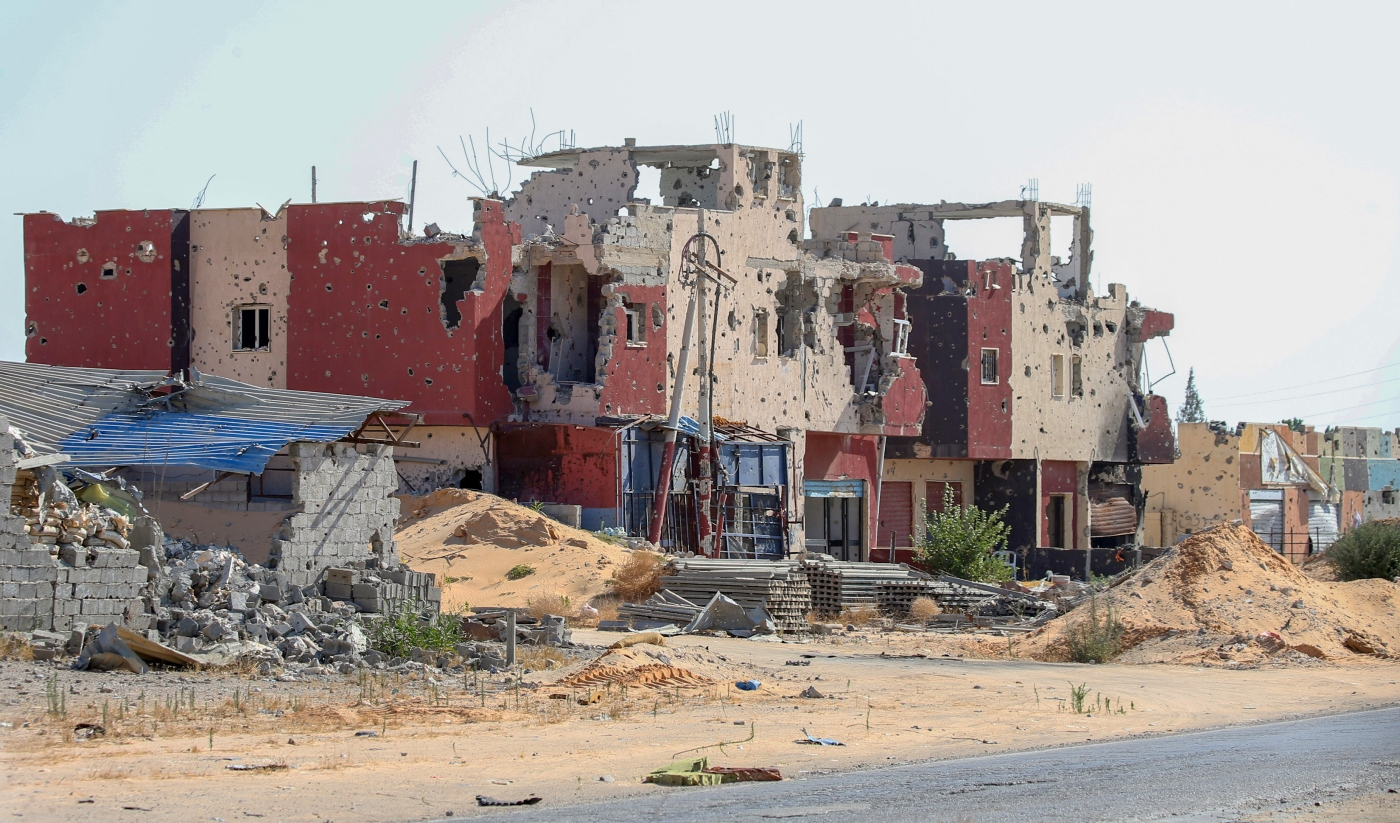 Building damaged during fighting between the GNA and Khalifa Haftar in a southern neighbourhood of Tripoli, 9 July 2020 (AFP)
By Ragip Soylu
in Istanbul

Turkey’s chief diplomat said on Monday that military preparations had been made to seize Libya’s city of Sirte and Jufra air base if forces linked to eastern commander Khalifa Haftar did not withdraw from both areas.

Foreign Minister Mevlut Cavusoglu said in an interview with state broadcaster TRT Haber that the UN-backed Government of National Accord (GNA) wanted to drive Haftar's forces out of Sirte and Jufra, and had Ankara's support.

"There are preparations for an operation but we are trying the [negotiation] table. If there is no withdrawal, there is already a military preparation, they (GNA) will show all determination here," Cavusoglu said.

The foreign minister said Turkey and the GNA wanted Haftar to abide by the Libyan political agreement signed in 2015, which left the city of Sirte and the district of Jufra in the hands of the government.

“Of course the GNA doesn’t want a ceasefire without these places because Haftar is not sincere,” he added. “He is trying to buy some time while making preparations to attack Misrata and Tripoli. And he doesn’t offer anything meaningful for the political path."

Cavusoglu vowed that Haftar would witness the same military decisiveness in Sirte and Jufra as was seen in the GNA offensive launched in May, which forced Haftar's forces to cede territory.

Turkey recently said that the political route could not succeed with Haftar, saying there was a need for a replacement that could uphold promises.

Many observers in Ankara believe Haftar and his backers, including Egypt, Russia and the United Arab Emirates (UAE), want a ceasefire to momentarily freeze the conflict, regroup and later ignite a second wave of fighting to push back into GNA territory in the west.

Despite a UN weapons embargo on Libya, Turkey signed a military cooperation deal with the GNA and had sent drones, armoured vehicles, Syrian mercenaries and military officers to support the government, which had been struggling to fight off Haftar's offensive to capture the capital.

Then GNA won a series of victories against Haftar’s so-called Libyan National Army, including the seizure of the strategic air base al-Watiya, which has seen the eastern commander's yearlong offensive in western Libya crumble.

Neighbouring Egypt declared last month that Sirte and Jufra were a red line that should not be crossed and threatened to take action.

Yet Cavusoglu said that Egypt and Turkey held talks on the maritime dispute in the Eastern Mediterranean with the Egyptian charge d’affaires.

Turkey and the Libyan government signed a memorandum of understanding in November to delimit maritime zones in the Eastern Mediterranean in an attempt to block further Greek and Cypriot energy drilling activities in the area.

Egypt called the deal at the time "illegal and not binding or affecting the interests and the rights of any third parties".

“Egyptian charge d’affaires in Ankara is an expert on this issue since he was also involved in negotiations with Greece for [a rival deal],” he said. “We have informed them and exchanged views on the issue. I can say that we all agree that our deal extends Egypt’s exclusive economic zone.”

Cavusoglu said Turkey would begin the drilling and exploration activities off the Libyan coast and was open to working with other countries, such as Italy. He did not provide a timeframe.