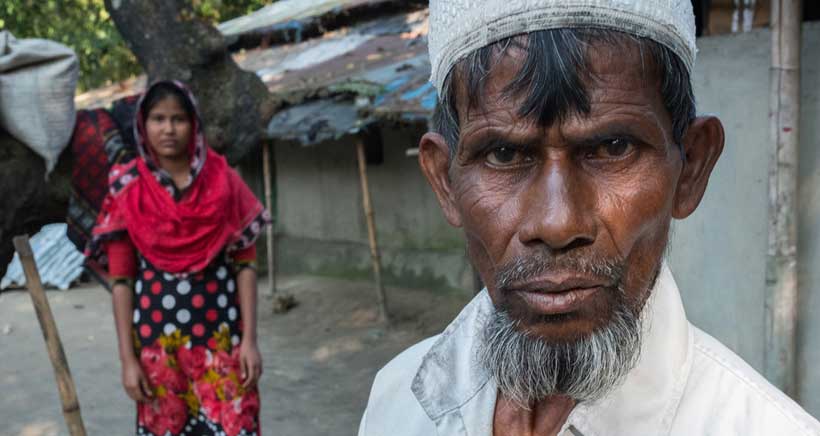 Farmer Nurul Haque stands near his 13-year-old daughter in Bangladesh, saying he may have to pull her from school and marry her off to an older man because he has few financial options left. UNICEF/UN0159775/Nybo

Across the world, girls as young as 12 are being forced or tricked into marrying men who exploit them for sex and domestic work, in what the UN Office on Drugs and Crime (UNODC) has called an “under-reported, global form of human trafficking”.

The agency has published a report which documents the interlinkages between trafficking in persons and marriage, and provides steps for governments and other authorities to strike back.

“This is the first publication that looks at the issue globally and through the lens of the international, legal obligations that States have to address trafficking in persons,” said Silke Albert from UNODC’s Human Trafficking and Migrant Smuggling Section, one of the report’s key authors.

Experts interviewed some 150 people who come into contact with potential victims of human trafficking, such as lawyers, government officials, members of non-governmental organizations and police officers.

“We discovered that although trafficking for the purpose of marriage is a global phenomenon, the way the crime is perpetrated in different countries is very specific depending on cultural, religious and socioeconomic factors,” said Tejal Jesrani, a UNODC Research Officer.

Most cases of trafficking for the purpose of marriage involve young, female victims, many of whom come from disadvantaged family backgrounds, according to the report.

Researchers found that the “marriages” can be arranged by family members, wedding agencies or brokers, often for financial or material gain. In some cases, brides are kidnapped.

Various coercive or fraudulent methods are used to obtain consent, including abduction, deception, abuse of vulnerability and the receiving of payments or gifts.

Women and girls trapped in these forced unions face violence, abuse, restrictions on movement and isolation from their parents and friends.

Ms. Albert explained that there are many factors that make women vulnerable to abuse and exploitation, including their age, status, and lack of education and employment opportunities.

“Physical and sexual abuse is common and mainly perpetrated by the husband, but sometimes also by his relatives and friends and other third parties, including clients purchasing sexual services or abusive marriage brokers”, she said.

The report states that marriage can be linked to all phases of human trafficking, starting with recruitment and transportation of the victim.  As with other forms of trafficking, only a small proportion of cases reach the attention of the police, and there are very few convictions.

Furthermore, women and girls usually find it difficult to seek help, for fear of stigmatization.

“Marriage is normally considered a private, family matter, which is not discussed even when domestic violence and abuse are involved,” said Ms. Albert. “The victims are also concerned about what would happen to their children, residence permits or to their homes if they report the crime.”

A tool for action

The report contains several policy recommendations. The aim is to prevent cases of trafficking linked to marriage, identify and protect victims, and prosecute those responsible.

Ms. Albert explained that in general, victims of human trafficking are not being properly identified and do not receive the support they need. “So, when this crime takes place in the context of marriage, which is so deeply rooted in local traditions, religions and social structures, identification and investigation are even more complex,” she said.

UNODC hopes governments will use the report to develop national response. “It is also seen as a resource for police officers, immigration and health authorities and social workers”, Ms. Albert added. “They need to know the indicators of the crime, which are detailed in the publication, so they can take appropriate action.”

The report is also a tool for lawyers, prosecutors and judges as it includes a section that outlines relevant international treaties and laws, as well as the legal obligations of States regarding victims’ rights.

“Human trafficking is committed for the purpose of exploitation.  So, a key question when dealing with potential cases of trafficking for marriage is to what extent do the circumstances, which can include abuse and violence, qualify as exploitation as stated in the UN’s Trafficking in Persons Protocol,” said Ms. Albert, referring to the main global, legally-binding instrument.