Fears grow fighting between Ethiopia’s federal army and Tigray forces could draw in outside involvement. 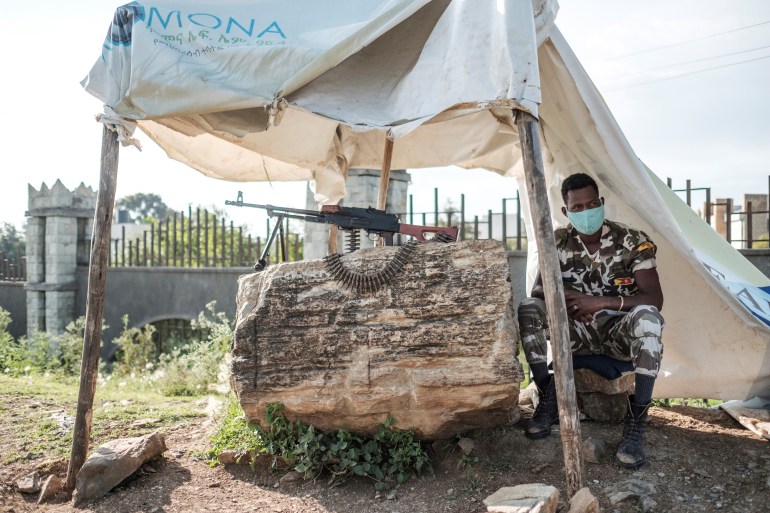 A member of Tigray police is pictured at a checkpoint in the region [File: AFP]

Immediately after Ethiopian Prime Minister Abiy Ahmed announced in the early hours of Wednesday the beginning of military operations against the northern Tigray state, fears emerged that a prolonged conflict could reverberate across the wider region and draw in outside forces.

At the heart of these concerns is Eritrea – Ethiopia’s northern neighbour bordering the Tigray region.

Addis Ababa’s military move came after months of feuding between the federal government and the Tigray People’s Liberation Front (TPLF), the party that dominated Ethiopia’s politics for nearly three decades until Abiy came to power in 2018.

Having accused the prime minister of trying to “sideline … and even criminisalise” the TPLF, the Tigray leaders in September held elections in defiance of a decision by the federal government to postpone all polls due to the coronavirus pandemic. With tension building up and each side trading barbs, TPLF leaders in recent months also accused their sworn enemy, Eritrea, of meddling in Ethiopia’s domestic affairs in an attempt to corner Tigray.

The mutual animosity between Eritrea’s longtime ruler Isaias Afwerki and the TPLF goes back decades – but it was not always like this. From the mid-1970s to the early 1990s, the Eritrean People’s Liberation Front (EPLF), which Isaias co-founded, and the TPLF were brothers-in-arms in the long struggle against Ethiopia’s military government led by Mengistu Haile Mariam.

Mengistu was overthrown in May 1991, and two years later Eritrea gained independence in a referendum. The TPLF, meanwhile, went on to become the leading force in the Ethiopian People’s Revolutionary Democratic Front (EPRDF) governing coalition, with late Tigray leader Meles Zenawi becoming the country’s prime minister.

In 1998, Eritrea and Ethiopia, however, went to war over a complex territorial, economic and political dispute that left tens of thousands of people dead. Despite the Algiers peace agreement in December 2000 ending the neighbours’ border conflict, Ethiopia and Eritrea remained in a state of armed standoff for nearly 18 years.

This “cold war” seemingly ended after Abiy’s rapprochement with Isaias after assuming office in April 2018, replacing Prime Minister Hailemariam Desalegn in the face of months of anti-government demonstrations.

After weeks of secretive negotiations within the EPRDF, Abiy is believed to have overcome opposition from the formerly dominant TPLF to win the chair of the multi-ethnic, four-party coalition, a position that made him by default Ethiopia’s prime minister.

In July 2018, a series of secretive and fast-paced diplomatic exchanges between Addis Ababa and Eritrea resulted in a breakthrough, with the longtime foes re-establishing diplomatic ties.

Martin Plaut, a longtime observer of politics in the Horn of Africa, says the opaque nature of the Ethiopia-Eritrea diplomatic thaw gradually fed into Ethiopia’s bitter domestic political divide.

“It is impossible to be certain of Eritrea’s role in Ethiopia’s domestic conflict. Since the first visits to each other’s capitals by the two leaders in July 2018 there has never been a press conference at which journalists could ask either Prime Minister Abiy or President Isaias what they hoped to achieve,” said Plaut, a former BBC Africa editor.

“Communiques have been bland and uninformative. However, it is clear that relations are today so close that it is inconceivable that the Ethiopian leader would have undertaken such a major operation, on Eritrea’s border, without clearing it with his opposite number,” he added.

While the administration of Isaias has publicly reiterated its deep-seated animosity to TPLF, Eritrea’s involvement – if any – in the current conflict is still unclear for now. Meanwhile, a telephone and internet communications blackout in Tigray has made it difficult to verify the situation in the state and the border areas, leading to speculation.

“There have been reports of intense conscription of young Eritreans and of troops’ movements inside Eritrea, close to the border with Tigray. Some commentators anticipated a coordinated operation against Tigray with Ethiopians attacking from the south and Eritreans from the north. So far this does not appear to have taken place,” Martin said.

“An Eritrean offensive may yet go ahead, but the Tigrayans are well armed and President Isaias may be biding his time to see whether Prime Minister Abiy’s forces make progress before committing his own troops.”

Tsedale Lemma, editor-in-chief of the Addis Standard, an Ethiopian English-language publication that reports on domestic and foreign current affairs, said the opaqueness of the 2018 peace deal has fed into suspicions Tigrayan officials about the intentions of Abiy and Isaias.

She also cited “the lapse in judgement” from Abiy “to sideline TPLF from being a genuine part of the peace deal between Ethiopia and Eritrea from the get-go”.

“It should have been known to PM Abiy that for all his political differences with TPLF, peace between Ethiopia and Eritrea is practically impossible without the involvement and meaningful say of TPLF,” Tsedale said.