TheGuardian.com: Ethiopia: Rise and fall of Ethiopia’s TPLF – from rebels to rulers and back

Ethiopian People’s Revolutionary Democratic Front (EPRDF) reinforcements driving to the presidential palace in Addis Ababa in 1991. The EPRDF was a coalition of rebel groups, the largest of which was the TPLF. Photograph: Jérôme Delay/AFP/Getty Images
Jason Burke Africa correspondent
Wed 25 Nov 2020 17.00 GMT

In the centre of Mekelle, the highland capital of Tigray, is a complex of memorials and museums. Under the hot sun, old armoured vehicles, jets and helicopters rust quietly. On the city’s wide avenues, statues commemorate the “martyrs” and the victories of the Tigray People’s Liberation Front (TPLF), a small band of insurgents who became a guerrilla army, launched a successful rebellion and eventually ruled Africa’s second most populous country for almost 30 years.

This week federal Ethiopian forces have closed in on Mekelle in the final stages of a bloody offensive launched earlier this month by Ethiopia’s prime minister, Abiy Ahmed, with the aim of eliminating the TPLF as a political force.

The TPLF’s rise took 16 years, and its dominance of Ethiopian politics lasted nearly twice as long, but if Abiy’s “law enforcement operation” is successful, its fall will have taken less than 30 months. “It is really shocking. The decline is very dramatic,” said Yohannes Woldemariam, a US-based academic specialising in the Horn of Africa.

The TPLF was formed in 1975 at a time when hundreds of millions of people across Africa and the Middle East were demanding revolutions and liberation. Among those in Ethiopia calling for both were a dozen young men from the mountainous northern region of Tigray. Inspired by Marxist-Leninism, a profound sense of national identity, and the utopian slogans of the time, they imagined a brave new world for their country.

Only a year earlier, Haile Selassie, the last emperor of Ethiopia, had been deposed and murdered by hardline Marxist army officers, who immediately set about imposing a harsh authoritarian rule. In Tigray, there had long been resentment at the power of the centralised Ethiopian state. Many remembered the Tigrayan armed revolt of 1943, which had been brutally put down. This time, the TPLF leaders vowed, they would triumph.

Through the late 1970s the TPLF grew steadily. By 1978 the party had around 2,000 fighters, according to CIA estimates at the time. Two years later it could mobilise twice as many, the agency said.

Among them was Debretsion Gebremichael, who was then a wireless operator and propagandist for the insurgents and is now the group’s leader.

The TPLF’s success owed nothing to chance. Its leaders were ruthless and canny. They fought and destroyed rival rebel groups in Tigray and were careful to downplay their own Marxist views, which would be unpopular with the conservative, devoutly Christian rural populations that made up the TPLF’s initial support base. Instead, they emphasised the threat posed to local traditions and regional autonomy by the socialist policies of the regime in Addis Ababa.

An alliance with like-minded leftist nationalist rebels from the Eritrean People’s Liberation Front (EPLF) in the neighbouring province brought the organisation critical training and experience, which allowed it to resist the massive firepower of the Soviet-backed government regime.

“Ethiopian large-scale military operations to crush [the insurgency] have failed, with heavy losses of men and equipment,” noted the CIA in a 1983 assessment. “The government has paid a high political and economic price.”

But the suffering in Tigray was immense, with blunt and brutal counter-insurgency campaigns playing a significant role in the appalling famine of 1984. The TV reports that prompted global concern and the Live Aid concerts were filmed in Mekelle.

By the end of the 1980s, the TPLF was by far the biggest and most effective among the coalition of Ethiopian armed rebel groups that had united under the banner of the Ethiopian People’s Revolutionary Democratic Front (EPRDF) to fight the ailing Ethiopian regime. On 28 May 1991, TPLF troops backed by Eritrean forces seized control of Addis Ababa, the capital.

The fall of the regime left the TPLF’s leader, 36-year-old Meles Zenawi, in power and the army and intelligence services dominated by Tigrayans, who moved swiftly to consolidate their control in other sectors. Jobs were found for former comrades. Debretsion, the one-time wireless operator and by now a veteran close to Zenawi, was made the deputy head of the national intelligence agency, and later the minister of communications and information technology. 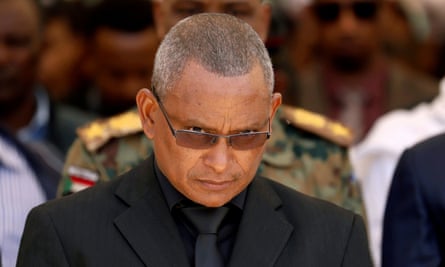 Debretsion’s career spans the two sides of Ethiopia under the TPLF-dominated coalition government from 1991. There was the construction of a carefully balanced ethnicity-based federal state, rapid development progress, massive infrastructure investment and stunning economic success, which has come close to banishing the hunger that once made the country infamous.

Mekelle thrived, its neat streets and electricity lines testament to the resources channelled to the TPLF’s stronghold.

But there was also repression so remorseless that it worried even the US, which saw Ethiopia as the cornerstone of its security strategy in the region and was prepared to tolerate most of the excesses of the TPLF leadership.

Discontent, especially among the two largest ethnic groups – the Oromo and Amhara – threatened the delicate compromise of the 1994 constitution, and representatives of the two communities eventually joined forces to outmanoeuvre the TPLF within the ruling coalition to get Abiy, who is of mixed Oromo-Amharic parentage, appointed as prime minister in 2018.

Abiy moved swiftly. Top TPLF officials were sacked from key security posts, generals were arrested on graft charges, and changes were introduced to counter the Tigrayan dominance of the armed forces. Political prisoners were freed from secret prisons, exiled dissidents were welcomed home, cumbersome state enterprises were privatised, and restrictions on the media were eased.

Abiy’s peace deal with Eritrea, which won him the Nobel peace prize, isolated the TPLF. By this summer, simmering tensions had risen further. The TPLF refused to hand over wanted fugitives or join a new political party set up by Abiy to replace the old ruling coalition, and it went ahead with local elections in Tigray despite polls being postponed nationwide owing to the coronavirus pandemic.

Observers said the decision was a “provocation”, even if supporters claimed it was a necessary defence of federal rights. Abiy’s office says the prime minister has tried to work with the TPLF but has been rebuffed.

The spark that set light to the tinder came in early November with an alleged raid by TPLF units on federal military bases in Tigray, in which many national army officers were killed and substantial quantities of hardware was seized. Abiy launched his offensive immediately.

It has taken federal troops three weeks to fight their way to within artillery range of Mekelle. It is unclear whether Debretsion and the TPLF’s other leaders are now in the city. Analysts think it likely they have scattered, seeking remote hideouts from which they can run a lengthy and costly insurgency.

“They are looking at the long term and trying to make Tigray a burial ground for Abiy’s troops,” Woldemariam said. “It is very tragic. A lot of people will suffer.”