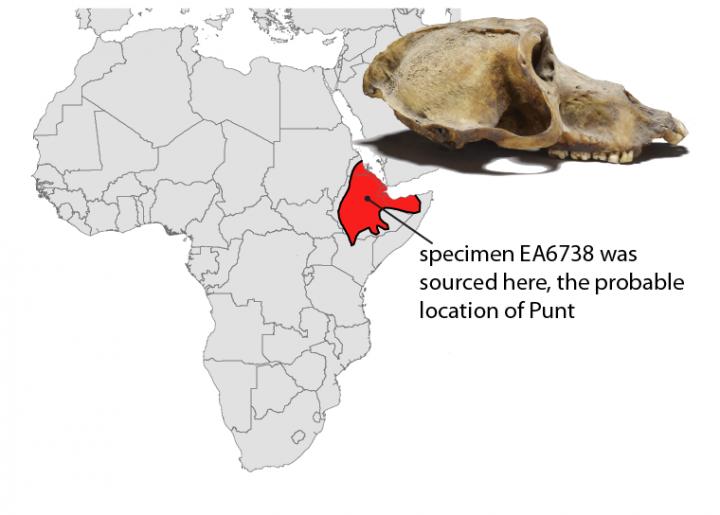 Ancient Punt was a major trading partner of Egyptians for at least 1,100 years. It was an important source of luxury goods, including incense, gold, leopard skins, and living baboons. Located somewhere in the southern Red Sea region in either Africa or Arabia, scholars have debated its geographic location for more than 150 years. A new study tracing the geographic origins of Egyptian mummified baboons finds that they were sourced from an area that includes the modern-day countries of Ethiopia, Eritrea, Dijbouti, Somalia, and Yemen, providing new insight into Punt's location. Published in eLife, the results also demonstrate the tremendous nautical range of early Egyptian seafarers. A Dartmouth-led team of researchers including primatologists, Egyptologists, geographers, and geochemists, worked together to analyze the isotope composition of baboons discovered in ancient Egyptian temples and tombs, and modern baboons from across eastern Africa and southern Arabia.

"Long-distance seafaring between Egypt and Punt, two sovereign entities, was a major milestone in human history because it drove the evolution of maritime technology. Trade in exotic luxury goods, including baboons, was the engine behind early nautical innovations," explains lead author Nathaniel J. Dominy, the Charles Hansen Professor of Anthropology at Dartmouth College.

"Many scholars view trade between Egypt and Punt as the first long maritime step in a trade network known as the spice route, which would go on to shape geopolitical fortunes for millennia. Other scholars put it more simply, describing the Egypt-Punt relationship as the beginning of economic globalization," he added. "Baboons were central to this commerce, so determining the location of Punt is important. For over 150 years, Punt has been a geographic mystery. Our analysis is the first to show how mummified baboons can be used to inform this enduring debate."

Ancient Egyptians revered baboons throughout their history, with the earliest evidence dating from 3,000 B.C. Baboons were even deified, entering the pantheon of gods as manifestations of Thoth, a god associated with the moon and wisdom. One species, Papio hamadryas (the sacred baboon), was often depicted in wall paintings and other works, as a male, in a seated position with its tail curled to the right of its body. The species was among the types of baboons that were mummified in this very position with the linens carefully wrapped around its limbs and tail. Another species, Papio anubis (the olive baboon), was also mummified but it was typically wrapped in one big cocoon in a manner reflecting far less care. Baboons have never however, existed naturally in the Egyptian landscape and were a product of foreign trade in the region.

The study focused on mummified baboons from the New Kingdom period (1550-1069 B.C.) available in the British Museum and specimens from the Ptolemaic period (305-30 B.C.) available in the Petrie Museum of Egyptian Archaeology at University College London. In addition, the authors examined tissues from 155 baboons from 77 locations across eastern Africa and southern Arabia, encompassing every hypothesized location for Punt. The team measured oxygen and strontium isotope compositions and used a method called isotopic mapping to estimate the geographic origins of specimens recovered from the New Kingdom and Ptolemaic sites in Egypt. 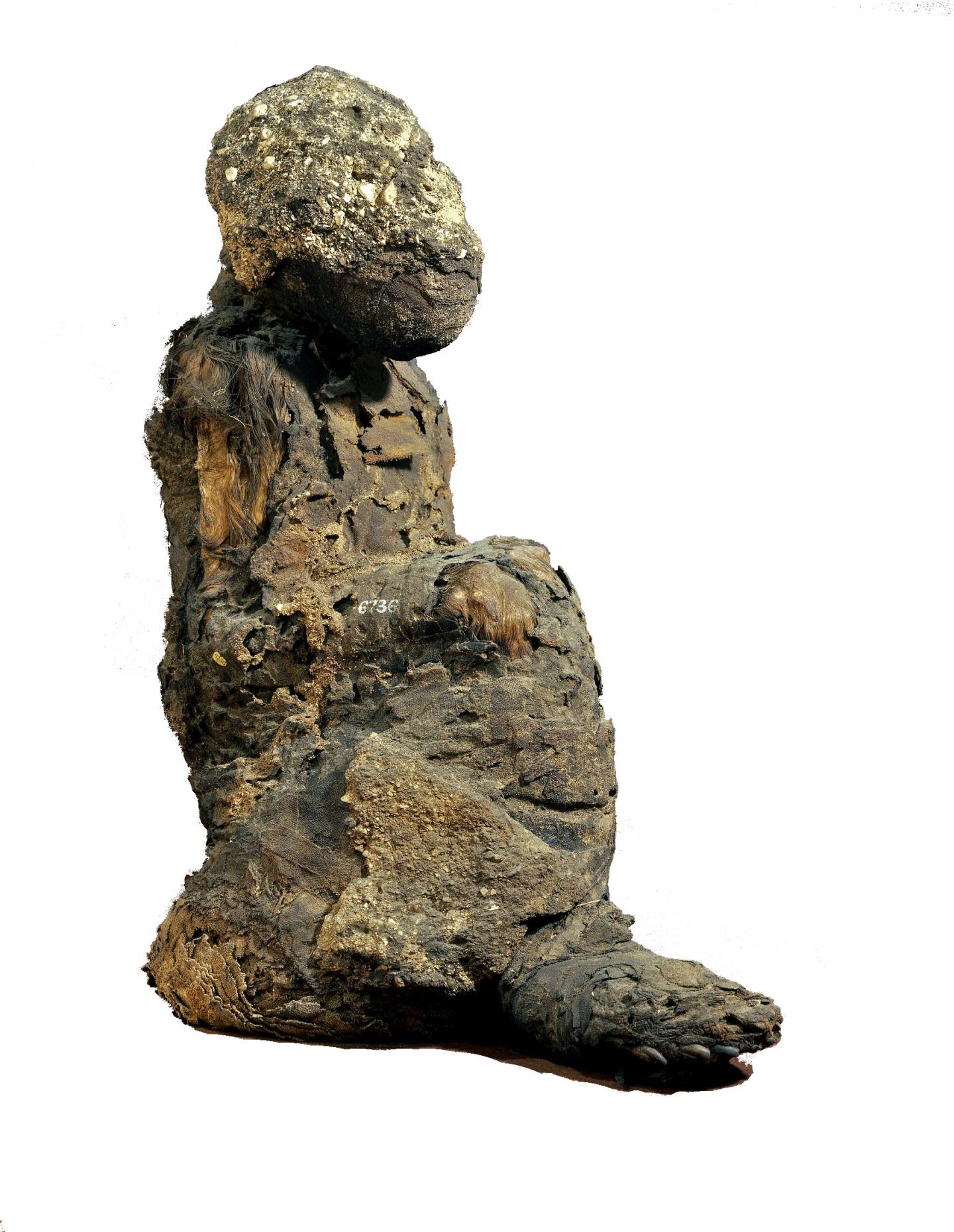 Specimen EA6736 recovered from the New Kingdom Temple of Khons and now accessioned in the British Museum.

Photo (c) The Trustees of the British Museum, and distributed under the terms of a Creative Commons Attribution-NonCommercial-ShareAlike 4.0 license. 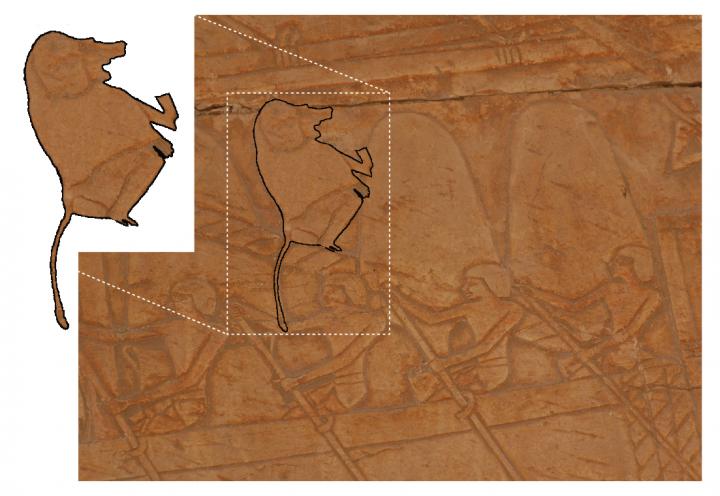 The baboon is one of seven examples of Papio hamadryas depicted in the rigging of Egyptian ships returning to Egypt from Punt.

Strontium is a chemical element that is found in bedrock, which is specific to a geographic location. As strontium erodes, its composition is absorbed into the soil and water and enters the food web. As animals drink the water and eat the plants, their teeth, and hair and bones, obtain a geographic signature reflecting where they have lived in the past and most recently, respectively.

Baboons must drink water every day and are considered obligate drinkers. Their bodies reflect the oxygen composition of water in the landscape. The enamel of an animal's adult teeth reflect the unique strontium composition of its environment when the teeth formed in early life. In contrast, hair and bone have isotope signatures that reflect the preceding months (hair) or years (bone) of dietary behavior. Similar to strontium, oxygen compositions (specifically, isotopes) of water can also vary by geographic location but the researchers found data from the specimens in this category were inconclusive, and only reflected values specific to Egypt.

The findings demonstrate that the two mummified P. hamadryas baboons from the New Kingdom period, EA6738 and EA6736, were born outside of Egypt. They had most likely come from a location in Eritrea, Ethiopia or Somalia, which narrows down the location of Punt.

The data suggest that EA6736, a P. hamadryas baboon, must have died shortly, day or months, after arriving in Egypt, as results indicate that its enamel and hair did not have sufficient time to convert to the local oxygen signature of drinking water.

Five species of mummified P. anubis from the Ptolemaic period reflected strontium levels that are consistent with an Egyptian origin, which provides tantalizing hints of a captive breeding program for baboons at this time, probably in Memphis, an ancient capital in Lower Egypt, northwest of the Red Sea.

As the researchers explain in the study, their estimated location of Punt is still provisional but the role that baboons played in the Red Sea trade network and their geographic distribution is one that is integral to understanding the historic origins of international maritime commerce.

The study was co-authored by Salima Ikram at American University in Cairo; Gillian L. Moritz at Dartmouth; Patrick V. Wheatley at Lawrence Berkeley National Laboratory; Jonathan W. Chipman at Dartmouth; and Paul L. Koch at the University of California in Santa Cruz.

Disclaimer: AAAS and EurekAlert! are not responsible for the accuracy of news releases posted to EurekAlert! by contributing institutions or for the use of any information through the EurekAlert system.