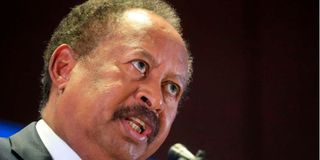 Sudan’s Transitional Government on Saturday reacted with anger to Ethiopia’s claims that an ongoing border tiff between them was being fueled by a “third party”.

Sudan argued Ethiopia has degraded Khartoum in their tussle for an area of land in al-Fashaqa in the east of Sudan, that borders Ethiopia’s Amhara regional state.

“The statement of the Ethiopian Ministry of Foreign Affairs, which accuses Sudan of working for other parties, is a grave and unforgivable insult,” Khartoum said.

“It is an absolute denial of the facts. If the Ethiopian Ministry of Foreign Affairs is missing the history of Sudanese patriotism, it cannot forget the great Sudanese revolution that the Sudanese recently carried out for the sake of freedom, justice and peace.

Ethiopia’s foreign ministry on Thursday said it believed the current border tussle being pushed by the Sudanese government’s military wing “could only serve the interests of a third party at the expense of the Sudanese people”.

Ethiopia did not name the third party but Egypt is the country currently embroiled in a dispute with Ethiopia over the filling of the $4.5 billion Grand Renaissance Dam in Ethiopia, which Khartoum has also demanded clarity on, so as not to protect its water needs.

If Ethiopia was referring to Egypt, it means the border conflict between the two countries is no longer just an issue of Khartoum and Addis Ababa, but a wider regional dispute.

This week, the African Union Commission chair Moussa Faki Mahamat nominated Mr Lebatt to get both sides to talk and address an issue that has remained unresolved for nearly 100 years, but which only surfaces seasonally when farmers from Amhara clash with Sudanese nomads.

On Saturday, Sudan said all its people and military are united in defending their territory.

“But what the Ethiopian Ministry of Foreign Affairs cannot deny is the third party whose forces entered Sudanese territory with the aggressive Ethiopian forces,” the Sudanese Foreign Ministry added, returning to recent claims that Eritrean forces were involved in the Tigray conflict, in the north of Ethiopia, as the government pursued remnants of the Tigray People’s Liberation Front.

The exchange of barbs is symbolic of the decline in relations between the two.

It was only in 2019 that Ethiopian Prime Minister Abiy Ahmed helped broker peace in Khartoum following the fall of President Omar al-Bashir.

Abiy earned a Nobel Peace Prize for bringing normalcy in Sudan and normalising relations with Eritrea.

But since November, when Sudan first deployed troops on the common border in al-Fashaqa, Ethiopia has accused Sudan of taking advantage of the Tigray conflict to amass troops.

Sudan says the boundaries have been marked since 1903, based on the 1902 agreement between Britain, Sudan’s colonial power then, and Emperor Menelik II of Ethiopia, whose borders were demarcated following a request and with a notarised authorisation.

Khartoum says Addis Ababa affirmed commitment to the agreement, most recently in 2013, under then Prime Minister Hailemariam Desalegn.