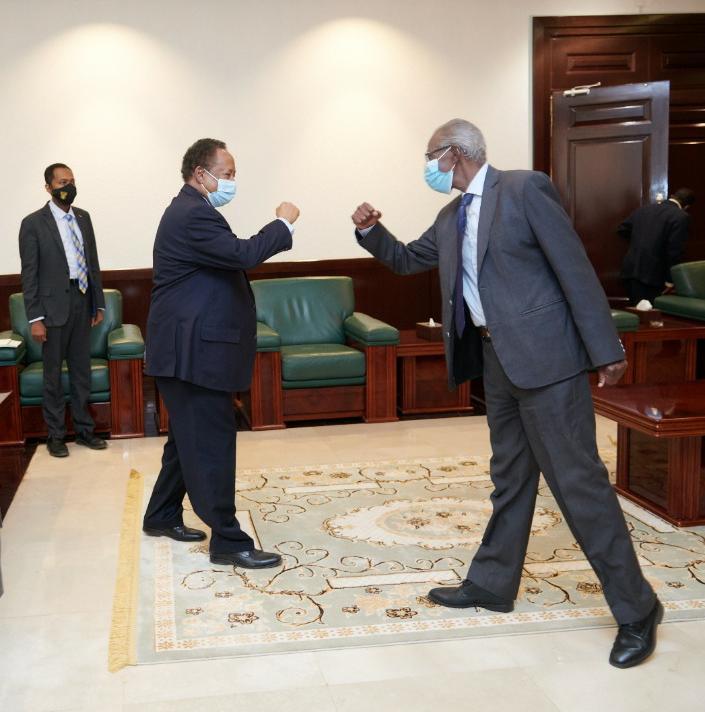 PM Hamdok  received Wednesday in his office the Eritrean Foreign Minister, Osman Salih, and the Eritrean President’s Advisor, Yamane Ghebreab, in the presence of the Cabinet Affairs Minister, Khalid Omer Yousif, and the Ambassador of Eritrea to Sudan

This came as a high-level Eritrean delegation, composed of the country's Foreign Minister Osman Saleh and Presidential Adviser Yemane Ghebreab, met in Khartoum, the Sudanese capital, with the Chairman of Sudan's Sovereign Council Abdul Fattah Al Burhan, as well as Sudan's Prime Minister Abdalla Hamdok, concerning the current relations between Sudan and Ethiopia.

The high-level Eritrean delegation delivered a message from the Eritrean president regarding relations between Sudan and Ethiopia, Yemane Gebremeskel, Eritrea's Information Minister, said in a statement.

According to the Eritrean Information Minister, Eritrea's Afwerki stressed in his message the need to overcome differences between the two neighbors" amicably and patiently."

The visit by Eritrea's high-level delegation to Khartoum came amid escalating tensions between the two countries over land disputes along the Al-Fashaqa border region, an area of fertile land settled by Ethiopian farmers that Sudan claimed to be within its boundary.

On Thursday, the Ethiopian Ministry of Foreign Affairs had condemned Sudan's escalation and provocative handling of the ongoing border conflict.

Ethiopia also warned that any conflict between the two countries would only result in colossal collateral damage and jeopardize the well-being of the two nations.

Meanwhile, the Sudanese Foreign Ministry also last week said it has summoned its ambassador to Ethiopia for consultations as tensions between the two neighbors have escalated in recent weeks over border disputes. Enditem