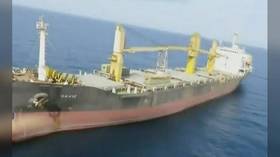 The Iranian ship Saviz (file photo) was reportedly attacked in the Red Sea, April 6, 2021 ©  Twitter/screenshot
Israel informed the United States it stuck Saviz, an Iranian-flagged ship, in the Red Sea on Tuesday, Saudi news network Al Arabiya reported on Wednesday, citing a report in The New York Times. The attack reportedly came in retaliation for earlier Iranian strikes on Israeli vessels, as the maritime shadow war between the Jewish state and the Islamic republic has been slowly coming to light.

The Saviz, long known to the international intelligence community as a spy shio operated by Iran's powerful Revolutionary Guard Corps, was attacked in the Red Sea by limpet mines attached to the hull, Iranian media reported.

"The vessel Iran Saviz has been stationed in the Red Sea for the past few years to support Iranian commandos sent on a commercial vessel (anti-piracy) escort missions," the Tasnim news agency said.

The New York Times cites an unnamed American official as saying Israel has informed the US that it had, indeed, struck Saviz.

"The Israelis had called the attack a retaliation for earlier Iranian strikes on Israeli vessels, and that the Saviz had been damaged below the waterline," the report noted.

According to Al Arabiya, the Saviz is officially listed as a general cargo vessel. However, the Combating Terrorism Center at the United States Military Academy described the 'Saviz' in a report as the "Iranian mother ship on station located in Eritrea's contiguous waters."

It said: "The ship has signals intelligence domes and antennae. It is visited by all Iranian ships moving through the Red Sea, nominally to coordinate anti-piracy measures. At least three speedboats are based on deck, which are used to ferry personnel to Yemen."

Iran's Foreign Ministry confirmed Wednesday that the Saviz had been targeted in the Red Sea.

"The explosion occurred on Tuesday morning near the Djibouti coast and caused minor damage with no casualties. The vessel was a civilian ship stationed there to secure the region against pirates," Foreign Ministry spokesman Saeed Khatibzadeh said., adding the incident "is under investigation."