Eritrean will be pro at Qhubeka - NextHash in 2022
Henok Mulubrhan: Talent from the cycling stronghold Asmara

By Kevin Kempf from Malselv 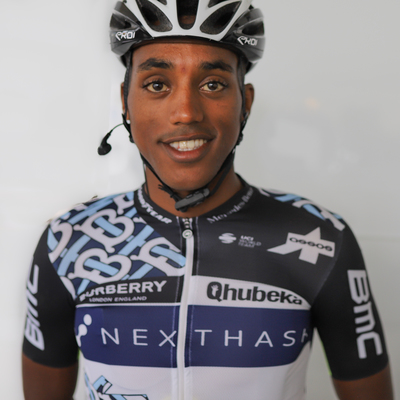 Around 6200 kilometers as the crow flies between the birthplace of Henok Mulubrhan and Tromsö, the starting point of the Arctic Race of Norway, where the Eritrean competes in the jersey of the Qhubeka - NextHash team. At the moment he is still listed as a trainee, but from the coming season Mulubrhan will be part of the professional team. Before the 4th stage, radsport-news.com spoke to the probably greatest African U23 talent.

“In Eritrea the temperature is almost always 22 or 23 degrees. It's totally different here in the north. Sometimes there is snow, sometimes it is raining. It's different than at home, but I already know it from Italy, ”explained Mulubrhan, who has lived in Lucca, Tuscany for two years and has already achieved a few results for the Qhubeka junior team since 2020. Last year he finished both the Tropicale Amissa Bongo (5th) and the Tour de Rwanda (10th) in the top 10.

Mulubrhan has its roots in a cycling stronghold. In the past few years, talented cyclists have made the leap to Europe from his hometown Asmara. Natnael Berhane (Cofidis), Natnael Tesfatsion (Androni - Giocattoli - Sidermec), Merhawi Kudus (Astana - Premier Tech), Mekseb Debesay (Bike Aid) and Biniam Ghirmay (Intermarché - Wanty - Gobert) also come from the Eritrean capital. “In Eritrea, cycling is the most important sport of all. Everyone is a cycling fan, every family wants to support their child in cycling, ”emphasized the 21-year-old.

The average European probably doesn't immediately think of cycling when they hear Mulubrhan's homeland. “I wish people would come to Eritrea or at least look at pictures. When there is a race with us, there are enormous crowds by the wayside, ”he enthused about the enthusiasm for cycling. The European cycling fan knows exactly these pictures from another African country: Rwanda. Every year there is a folk festival on the Mur de Kigali as part of the Tour of Rwanda (2.1) that is second to none.

“The Tour de Rwanda copied it from us!”, Said Mulubrhan, who made a very modest and balanced impression, but when mentioning the Tour of Rwanda said very firmly: “In 2010 they didn't even have enough races. But then they came to us, they saw how we are doing. And now it's really fantastic there too. People love cycling! "

This is also reflected in the Eritrean structures. “There are five or six cycling teams in Asmara,” reported Mulubrhan. And these are not “just” everyone. "Every Sunday there is a local league race," he reported.

The U23 driver has long outgrown this league. Mulubrhan is currently doing his first race in the second highest category north of the Arctic Circle. He already knew how to convince in low-class races, not only in Africa. In the difficult Giro dell'Appennino (1.1), for example, he crossed the finish line in sixth place. The winner at the time, Ben Hermans (Israel Start - Up Nation), was also the strongest driver on the royal stage of the Arctic Race. Mulubrhan finished in 23rd place 1:03 minutes behind and is now 29th in the overall standings.

After the Arctic Race, the upcoming neoprofi will head to the Tour de l'Avenir in France, where he is a candidate for the top ten. He has already proven his potential this season by finishing seventh in the Giro Ciclistico della Valle d'Aosta. In contrast, the classic profile of the U23 World Cup in Flanders is less likely to suit him. “But I'll try. We go there for our country. There's a lot going up and down, short steep climbs, I've heard. And a lot of wind. And it will probably rain in Belgium too ”, laughed Mulubrhan, before thanking him in a friendly way for the interview and after a handshake continued his preparation for the stage.