Al-Houthi: Eritrea released 118 Yemeni fishermen after holding them for months

According to the head of the General Authority for Fisheries in the Red Sea, "Hashem al-Dana'i", it was not possible to obtain an immediate comment from the Eritrean authorities. 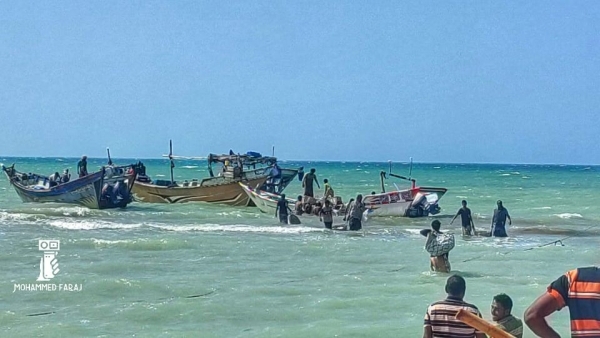 Yemen
Aziz Al-Ahmadi / Anatolia    30.08.2021
The Yemeni Houthi group announced, on Sunday, that the Eritrean authorities released 118 Yemeni fishermen after they were held for months in its prisons.
This came according to a statement by the head of the General Authority for Fisheries in the Red Sea, "Hashem al-Dana'i," published by the pro-Houthi Saba Agency.
Al-Dana'i said, "68 fishermen arrived last night (Saturday/Sunday) at the fishing port in Al Hudaydah Governorate (west/ under the control of the Houthis)."
While 50 others, according to the source, arrived at the Al-Khouba fish port in the same governorate, after being detained by the Eritrean authorities in their prisons for a period ranging between 6 and 9 months.
Al-Dana'i condemned, according to the agency, "what the state of Eritrea, along with the countries of aggression (meaning the coalition), is doing in terms of hostile practices against the fishermen and its continuation of tightening the screws on them."
The Houthi official did not specify where the fishermen were arrested, while it was not possible to obtain an immediate comment from the Eritrean authorities in this regard.
There is no official statistics on the number of Yemenis detained in Eritrean detention centers, but the Eritrean forces from time to time arrest fishermen from Yemeni waters, some of whom are released after days or after a week, and others whose detention extends for months.
The essence of the problem goes back to the disputed maritime areas of the two countries, represented in the islands of the “Hanish” archipelago, located between their coasts, near the Bab al-Mandab strait linking the Red Sea and the Gulf of Aden, before an international arbitration court ruled in favor of Yemen in this case, in 1998. .
Since then, Hanish Island has been under the control of Yemeni government forces
The "Houthi" group controls the center of Hodeidah governorate of the same name, in addition to its strategic port.