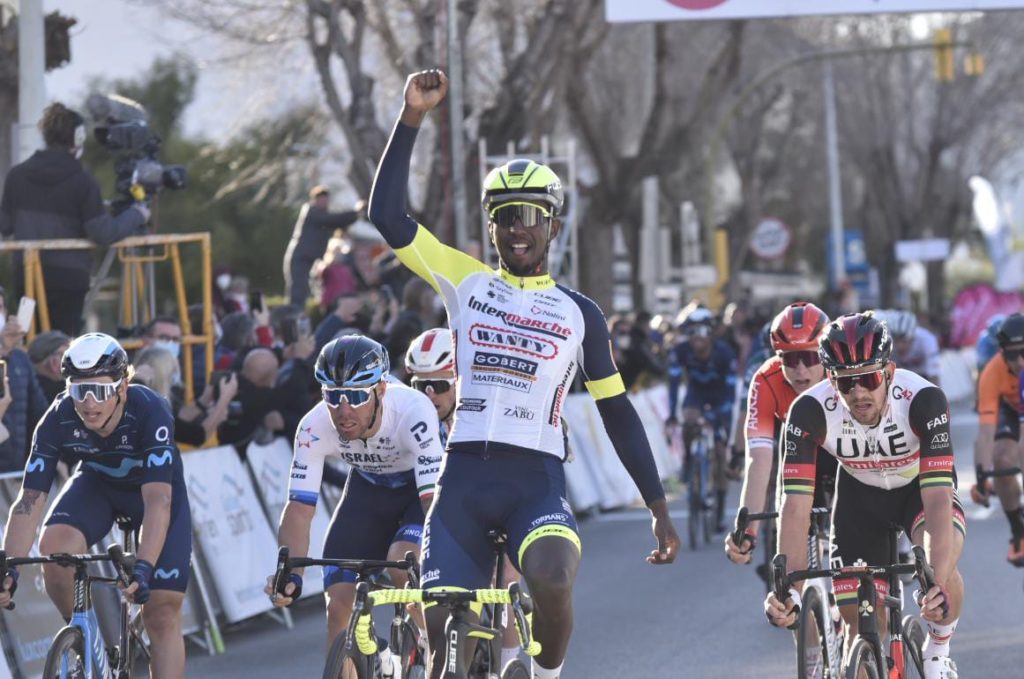 The start of Biniam Girmay’s first full season in a WorldTour team at Intermarché-Wanty-Gobert Materiaux can be summed up in five words: so far, so very good.

The 21-year-old Eritrean has already won one race - the Trofeo Alcudia in the Mallorca Challenge series - and he starts the Vuelta a Andalucia Ruta del Sol with his eyes firmly set on the race’s two flatter stages, but possibly more.

Further down the line, as last year's U23 World Championship silver medallist tells Cyclingnews, he is hoping to make his debut at Milan-San Remo and perhaps also at the Giro d’Italia. All while trying to follow in the tracks of his cycling idol, Peter Sagan.

While he respectfully says it is too soon to speculate about his chances of achieving similar
results to those of Sagan, Girmay says that if he can race in a similar way, he’d be happy.

"I really like the guy as a racer, and my potential is quite a bit like him. I can climb and I can sprint, so that’s my goal," Girmay told Cyclingnews before the Vuelta a Andalucia Ruta Ciclista Del Sol.

Although Girmay is a big fan of the triple world champion, he has never yet managed to cross paths with Sagan.

"I’ve never met him, still haven’t raced alongside him, so hopefully this year we’ll meet face to face. For now I just follow him on Instagram and in the media."

In the meantime, Girmay is quietly notching up his own moments of glory.

"I’m expecting more than before in 2022, and certainly more than when I joined the team last year and we were in the middle of the season," he said of his mid-2021 move to Intermarché-Wanty-Gobert

"Everything is prepared very well here, but when you join a WorldTour team" - particularly after a year and a half with a second-division like Delko - "everything is a bit different.

"But for sure I’m expecting more and starting off by winning is a really good beginning. Hopefully I’ll see some results in the bigger races."

Over the winter, Girmay said he took advantage of the warm weather in Eritrea at that time of year to get in some good training blocks as well as putting more emphasis on gym work.

Meanwhile, he and the Intermarché-Wanty-Gobert team have continued to build a small but effective lead-out train, with riders like former Hungarian National Champion Barnabas Péak helping Girmay in the final kilometres.

"He learned a lot at Delko and took a good step up with us last year and this year we’re hoping he takes another with us," Steve De Neef, directeur sportif at Intermarché-Wanty-Gobert, tells Cyclingnews.

While it is far too early to begin to think about comparisons with Peter Sagan, De Neef admits there are some similarities in their abilities.

"He can get over the four to five-kilometre long climbs, so a race like the Ruta should suit him. But I think we still have to find out a lot about him as a racer. It’s early days."

In the sprints, De Geef says the team are working to keep Girmay protected rather than letting him fend for himself as some sprinters prefer to do.

"The speed’s so high nowadays that if you’re out of position it’s really difficult to get back in again. I think everybody needs that support," he explained.

Girmay earns praise from his director for being willing to pitch in and help other riders on the team when it’s clear that he cannot succeed himself.

The Clásica Jaén was a good example of that, where Girmay, who had never raced on gravel roads before, worked for Loic Vliegen, who went on to finish third behind Alexey Lutsenko (Astana-Qazakstan) and Tim Wellens (Lotto-Soudal).

"He saw it was too difficult for him so he gave his full support to the other guys," De Neef told Cyclingnews. "But now [at the Ruta] he’s got some good stage racing for him."

De Neef says it’s too early to say what kind of role Girmay might play at Milan-San Remo, particularly when the team also will field a former winner in Alexander Kristoff. Furthermore, Kristoff is clearly currently in excellent form, having just won the Clásica de Almería.

While Paris-Nice and the Giro d’Italia are also possibilities, one race stands out for Girmay. He is determined to return to the World Championships after coming so close to winning a world title last year.

"I’m really looking forward to it in Australia and I think I’ll have a good chance, and I’d like to get more experience at it," Girmay said, keen pull on the rainbow jersey that a certain Peter Sagan held for three straight years.

Sprint sensation Ghirmay has Sagan as a great example