(The EastAfrican) Xue Bing: Beijing will send engineers, not weapons, to Horn of Africa

Xue Bing: Beijing will send engineers, not weapons, to Horn of Africa 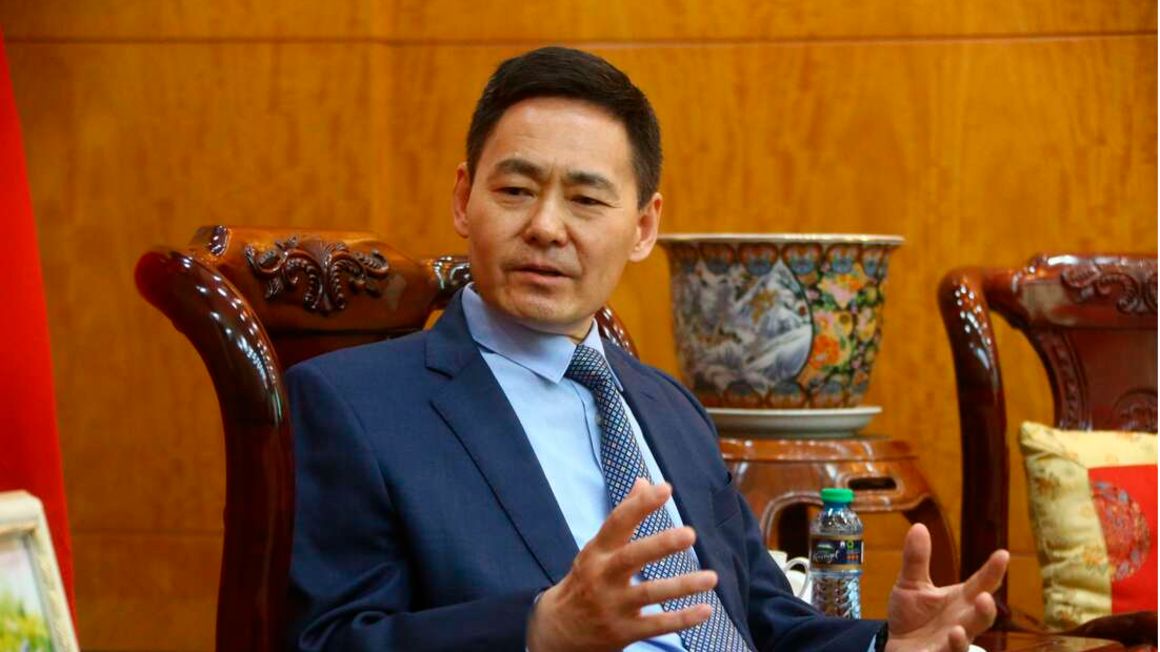 Xue Bing, China’s special envoy for the Horn of Africa, during an interview at Chinese Embassy in Nairobi on March 19, 2022. PHOTO | SILA KIPLAGAT | NMG

By AGGREY MUTAMBO
More by this Author

China’s special envoy for the Horn of Africa, Xue Bing, is touring four countries in the region to market his country’s alternative proposal to end incessant conflicts here.

But the diplomat argues China will not compete with Western powers to arm fighters in the region.

Instead, it intends to send engineers and scientists to help tackle poverty and infrastructure problems that he argues could cement long-term peace.

He spoke to The EastAfrican in Nairobi.

Why is China now more focused on the Horn of Africa?

The Horn of Africa is a group of eight countries, all of which are true friends of China. We have very strategic partners with whom we enjoy long-term exchanges – political, economic, cultural, people-to-people exchanges – and for a long time, China has done a lot to improve the development and people’s living standards and put a lot of effort into improving these relations.

China wants to play a role in this area to promote security, development and governance in this region. I have come here to seek views from regional leaders about China’s peace proposal, and I will also make use of this trip to encourage regional countries to hold the first peace conference in the first quarter of this year.

Besides your visit, what will be your responsibilities in this new role?

Apart from the task of this visit, I will keep close communication with regional countries, including their representatives in Beijing. As a matter of fact, I already met with heads of missions in Beijing. Before coming here, I visited Eritrea, Ethiopia and Somalia, and from the look of things, the initial response to the Chinese proposal is very positive.

How does China intend to use its experience back home to bring lasting peace and security in the Horn?

In the past 70 years or so since its founding, under the strong leadership of the Communist Party, the People’s Republic of China has enjoyed a long time of development. We achieved two miracles: one was the development of the economy where we became the second-largest economy in the world more than 10 years ago and we have kept up the momentum. The second miracle is long-term social stability.

Since regional countries in the Horn are true friends of China, sometimes we are very sad to see conflict still raging here and causing a lot of misery. We want to share our Chinese way and contribute to regional peace and security by utilising Chinese wisdom. That is why we put forward this proposal, whose essence is to get rid of external intervention. We respect and support regional countries to settle their differences independently. It is a Chinese proposal but the regional countries will play a leading role and be the main actors.

How does the Outlook on Peace and Development specifically address long-term peace and security in the Horn?

There are three aspects of this proposal. The first is the security pillar, to promote regional contacts to overcome challenges of peace and security. By implementing this, we proposed to hold the first regional peace conference where people can come together and discuss the problems. We want to provide that platform for everybody to come together to settle their differences without external intervention and to settle their differences through peaceful negotiations.

The second aspect is development. To improve people’s lives, there are a lot of projects supported by the Chinese in this region. The most important, for example, are the two railway lines: Nairobi to Mombasa, and Addis Ababa to Djibouti city. The other area of development is the two coasts –the coast around the Red Sea and the one around the East African region. We want to help our friends here to build an industrial park, part of the Belt and Road Initiative to realise long-term prosperity of this area.

The third area is governance. Good governance will provide a better environment for development. China has enjoyed long-term continuous development and we want to share our experience. The Chinese way is very different from that of Western countries. Sometimes Western countries regard themselves as lords and want to lord it over and preach their style. China also wants to share their experience but we don’t impose our views on regional countries. We encourage regional countries to develop a path which is suitable for their national conditions.

It looks like you are just countering the West in the region. What is your view about that?

Western media tend to see the issue in the Horn from the perspective of geopolitics, as (competition between two powers). China never does that. From the past, you could see what we have done here. China will send out engineers and students. We don’t send out weapons. We don’t impose our views on others in the name of democracy or human rights. Our real purpose is to achieve common development and prosperity. We want to see our friends here enjoy the same living standards, the same happy life. It has nothing to do with geopolitics or competition with major powers.

So what sort of good governance will you encourage the Horn to follow?

Every country has its own national conditions. In China, the leadership of the Communist Party is paramount. In the just concluded sixth plenary session of the party congress, the biggest achievement was two establishments. The first is the establishment of President Xi Jinping as the core of the party and as the core of the Central Committee of the party. The second is the establishment of the Xi Jinping Thought on Social Development with Chinese characteristics as the guideline of the whole country on the path of development.

These two establishments are important to China to ensure good governance for the whole party and development with socialist characteristics. This type of development is more suitable to China and we think it is good governance and we want to share it with our friends here. It is up to our friends to see which system is good and which systems, Western or Chinese, you could learn from. We don’t impose.

The conflicts in the region have also worsened the humanitarian situation. How does China come in on the short-term solutions?

China supports regional countries to fight famine and resolve the humanitarian crisis. During my trip, China provided emergency food aid to four countries – Eritrea, Djibouti, Ethiopia and Somalia. That is about RMB40 million ($6.29 million). We always support Kenya as well against hunger and Covid-19.

What are your priorities in the Horn and do you have timelines for them?

Coming back to the Outlook, one of the aspects is development. The two railway lines could be extended or could be merged and could be built into an extension of the Belt and Road (initiative). We need further discussion, of course, with the regional countries to come up with a proper plan for these two lines and two coasts.

China's special Horn of Africa envoy has work cut out ahead of ...

Xue Bing: Beijing will send engineers, not weapons, to Horn of ...