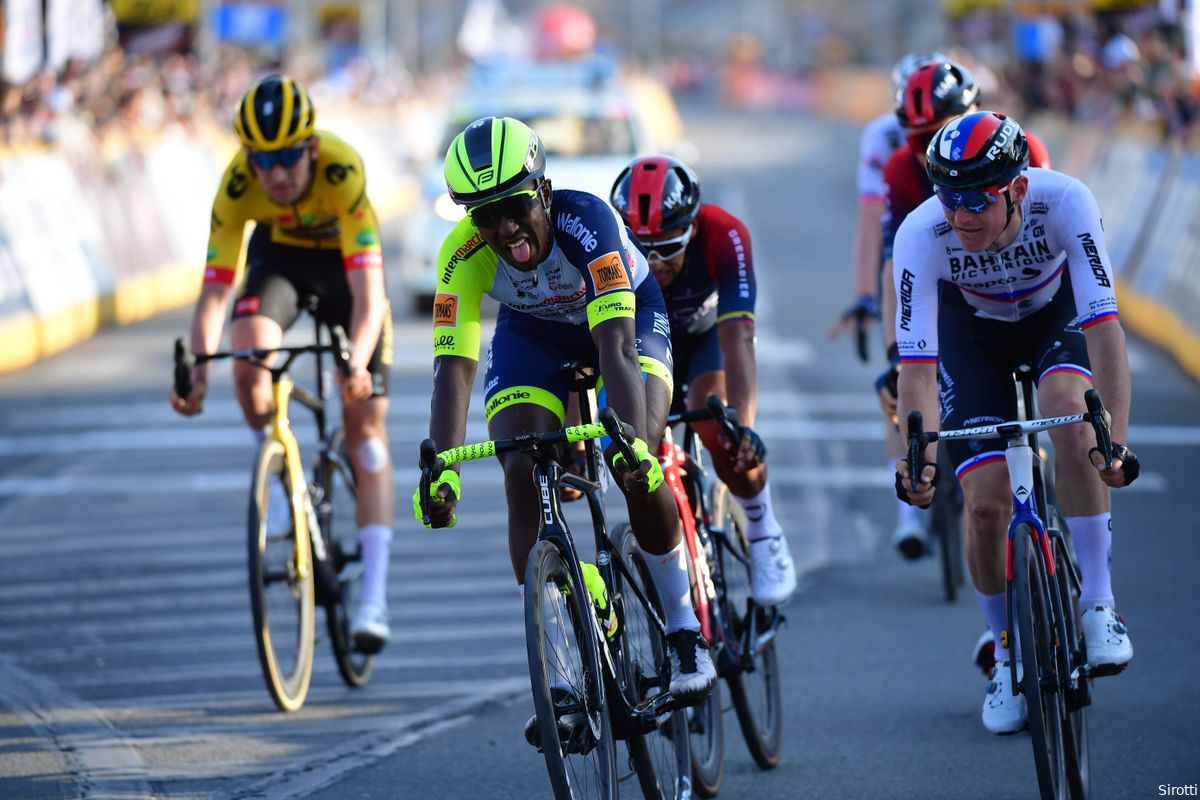 Biniam Girmay has won Gent-Wevelgem . The rider of Intermarché-Wanty-Gobert defeated his three fellow refugees after an impressive attack attempt in the final of the race, which was only set up well after the hill zone. From fourth position he defeated Christophe Laporte by a big lead.

It was only after more than half an hour of racing that there was an early flight. Seven riders managed to break away from the peloton. Their names: Jelle Wallays (Cofidis), Alexander Konychev (BikeExchange), Nikias Arndt (DSM), Ludovic Robeet (Bingoal), Lindsay De Vylder (Sport Vlaanderen), Johan Jacobs (Movistar) and Lars Saugstad (Uno-X). The seven had a maximum lead of six minutes.

After a quiet passage through the nuts and a hard crash by, among others, Sep Vanmarcke (Israel – PremierTech) and Gianni Vermeersch (Alpecin-Fenix), the riders headed for the first passage of the dreaded Kemmelberg. A few favorites had to rectify a predicament before that.

The Kemmelberg then caused a few fractures, as expected, but nothing major. At the front, Saugstad had to let go and everyone in the peloton came together again. Greg Van Avermaet (AG2R Citroën Team) only attacked after the Kemmel, after which an interesting group arose. Among others, Matej Mohoric (Bahrain), Biniam Girmay (Intermarché) and Kasper Asgreen (Quick-Step) jumped with the Belgian. Notable absentee: Wout van Aert .

Due to the fast pace of the favorites, the leading group was soon ready for the effort. With sixty kilometers to go, the Van Avermaet group reached the six. The peloton was half a minute behind. It was too fast for Fabio Jakobsen (Quick-Step). Asgreen became the leader of his team.

Van Aert placed his attack on the last Kemmelberg. He quickly started, the rest had the greatest difficulty following the Belgian from Jumbo-Visma. He came up solo, with his teammate Christophe Laporte right behind him, the fast Mads Pedersen (Trek), the daredevil Mohoric and the cunning Søren Kragh Andersen (DSM). Asgreen was also involved, the Dutchman Dylan van Baarle (INEOS) also joined.

The peloton was broken into several pieces, different groups of riders tried to organize themselves. Tim Merlier (Alpecin-Fenix) had missed the stroke, but had his fast teammate Jasper Philipsen in the first peloton, which joined the front runners. Van Aert did his utmost to prevent this, but without success.

Four riders then attacked in the final. With twenty kilometers to go there was a leading group of Girmay, Laporte, Dries Van Gestel (TotalEnergies) and Jasper Stuyven (Trek). Victor Campenaerts tried to make the connection to the quartet, but without success. Van Avermaet and Rasmus Tiller (Uno-X) also failed in an attempt to get in. The four boys managed to get half a minute ahead of each other in a clever way. The peloton was also driven hard.
https://twitter.com/Eurosport_NL/status/1508095549953744896
nos.nl/video/2422851-girmay
Back to Dehai News