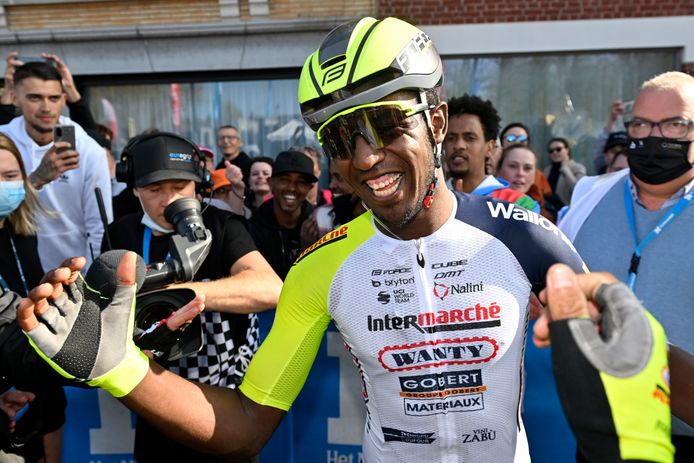 Biniam Girmay (Intermarché-Wanty-Gobert Matériaux) made history at Gent-Wevelgem, the Eritrean taking the win by outsprinting Christophe Laporte (Jumbo-Visma) in the final 250 metres of the cobbled Classic for the biggest win of his young career.

The 21-year-old was part of the four-man group that stole away on the flat run to the finish after the final ascent of the cobbled Kemmelberg. The quartet held off a spirited chase from behind to contest the sprint, with Dries van Gestel (TotalEnergies) taking third ahead of Jasper Stuyven (Trek-Segafredo).

"It's unbelievable, amazing. I cannot expect this. We just change my plan a few days ago on Friday. We just came for a good result. This race is amazing. Unbelievable," Girmay said after the finish about being the first African champion of the race.
"I don't think [I'll stay for Tour of Flanders]. I stayed here a long time – three months. I miss my wife and daughter so I go back home."

The crucial selection in the race was formed 24km from the finish, when Girmay, Laporte, Stuyven and Van Gestel broke clear of a large group that had formed on the aftermath of the final ascent of the Kemmelberg.

With top sprinters Arnaud Demare (Groupama-FDJ) Tim Merlier and Jasper Philipsen (both Alpecin-Fenix) all still present in that group, there was a committed chase, but the leading quartet rode well enough together to stay clear.

The sprint for victory was bound to be a tight one, with all four riders packing a significant punch.

"Of course I feel much better but also there's really strong guys with me so I'm a bit afraid. But I felt confident in the last 250 metres. It's unbelievable, yeah. It changed a lot in the future, especially for all African riders," Girmay said.

"I lost many places, especially on the first section and on the first cobblestones. I felt a bit uncomfortable. But after i felt better and better, rode smart, followed. Then in the end you know everybody is waiting for Van Aert so I played it a bit easy."

As a race that often hinges on how strong the wind blows, it came as a disappointment for any riders hoping for more of a selective race when they woke up to calm, mild conditions.

Still, there were three ascents of the cobbled Kemmelberg to contend with, along with six other major climbs, and three gravel 'Plugstreet' sectors, too, before a flat run to the finish line.

The first, flat half of the race therefore proceeded mostly without incident, as the riders waited for the climbs to start before they began racing in earnest.

Their lead came close to seven minutes, but work from the likes of QuickStep-AlphaVinyl and Jumbo-Visma kept them under control.

The pace picked up in the peloton as the teams vied for position ahead of the first climb of the day, the Scherpenberg, 97km from the finish.

Amid the increased pace was also the first crash of the day, as several riders fell into a ditch at a pinch point 105km from the finish, including Florian Senechal (QuickStep-AlphaVinyl).

The incident caused splits in the peloton, with multiple smaller groups having to chase back on, with Tom Pidcock (Ineso Grenadiers), Matteo Trentin (UAE Team Emirates) and Sep Vanmarcke (Israel-PremierTech) among those caught out.

Jumbo-Visma and Bahrain-Victorious won the battle for position ahead of the Scherpenberg, and were still the most prominent teams at the next climb, the Baneberg, but the latter lost one of their men after the climb as Kamil Gradek went down in a crash also involving Brent Van Moer (Lotto-Soudal).

Although his teammate Davide Ballerini slightly overshot the corner leading onto the first ascent of the Kemmelberg, Kasper Asgreen led the peloton for some of the climb, before Wout van Aert (Jumbo-Visma) took over going over the top.

The peloton was still large after this key climb, but was missing Peter Sagan (TotalEnergies), who had been dropped.

Rather than a climb, it was a flat section shortly after the Kemmelberg 78km from the finish that saw the first dangerous selection form, when Matej Mohorič (Bahrain-Victorious) accelerated at the front of the peloton, and brought around 15 riders with him including Asgreen, Greg Van Avermaet (Ag2r Citroen), Biniam Girmay (Intermatche-Wanty-Gobert) and Arnaud Demare (Groupama-FDJ).

This group caught the break during the plugstreets, and they held a gap of around 20 seconds over the peloton, where TotalEnergies were leading the chase.

Their work proved to be enough, and the catch was made with 58km left to ride, meaning a leading group made it to the second ascent of the Kemmelberg together.

Van Aert and Asgreen were again the leaders on that climb, and took 13 riders with them, with Mads Pedersen (Trek-Segafredo), Arnaud Demare and Victor Campanaerts (Lotto Soudal) especially prominent. But as happened earlier there was enough of an organised chase behind to bring them back, and the race was again back together 45km from the finish.

Despite a few attacks from riders including Van Avermaet and Tiesj Benoot (Jumbo-Visma) then Anthony Turgis (TotalEnergies) and Jacobs, the group remained together for the day's penultimate climb, Baneberg, where Olivier Le Gac (Groupama-FDJ) and Tiej Benoot again tried to go clear to no avail.

That left just one climb to make a difference, the third and final time up the Kemmelberg.

Van Aert started the climb a few wheels back from where he would have liked, but produced a brutal acceleration to move to the front and crest the summit with a small gap.

He was joined by Asgreen, Mads Pedersen (TrekSegafredo), Søren Kragh Andersen (DSM), Mohoric, Dylan van Baarle (Ineos Grenadiers), and teammates Benoot and Laporte on the descent, in what was a very strong looking group.

But the presence of Van Aert and so many Jumbo-Visma riders seemed to discourage the other riders from working, and another group was able to join them 27km from the finish which included fast finishers Démare, Philipsen and Girmay.

Shortly after this regroupment the race-winning move was made, as Laporte, Girmay, Styven and Van Gestel went clear 24km from the finish. Van Avermaet and Rasmus Tiller (Uno-X) tried to bridge up to them, but sat up when they found themselves stuck in no-man's land.

The quartet's advantage grew to about 40 seconds, but looked in danger of being caught towards the end, as it fell to just 20 seconds with 3.5km to go. However, an attack from Kragh Andersen appeared to take the impetus out of the chase 2km from the finish, and the quartet were left to sprint for victory.

It was a close-run thing at the line as Girmay launched his final dash very early with 250 metres to go – a huge distance for a finishing sprint – but the Eritrean held off Laporte to claim the win. 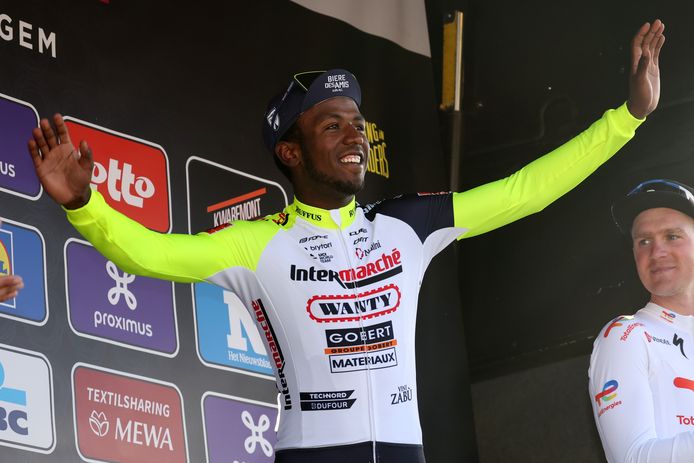