Ghirmay's salary set to triple after his Gent-Wevelgem victory | Cyclingnews

Ghirmay's salary set to triple after his Gent-Wevelgem victory 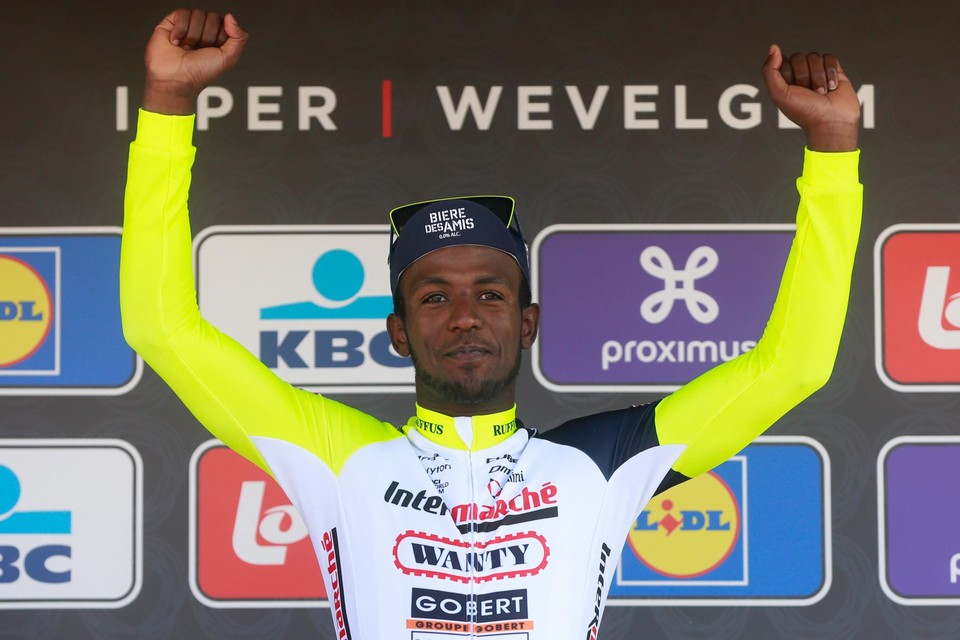 When Biniam Girmay returns to Europe from Eritrea after his break from racing, he is likely to ink a new contract with the Intermarché-Wanty-Gobert team that will triple his current salary of €300,000 and place him at the centre of the team’s Classics squad.

Girmay is already under contract until 2024 after the Belgian team saw his potential last year and signed him from the struggling Delko team. However, his victory at Gent-Wevelgem and his huge potential in sprints and the Classics mean even team manager Jean-Francois Bourlart is ready to triple his contract with backing from the European supermarket chain.

Girmay made history by winning Gent-Wevelgem and is said to be happy at the team thanks to close support from Performance Director Aike Visbeek and experienced directeurs sportif Hilaire van der Schueren and Valerio Piva. Girmay had the support of Adrien Petit, Alexander Kristoff and Andrea Pasqualon in the decisive moments of Gent-Wevelgem but the team is expected to further strengthen its Classics squad to protect Girmay and back his ambitions in 2023.

Cyclingnews understands that his salary and bonuses will see him earn over €1 million per season, with the new deal lasting until the end of 2024.

According to La Gazzetta dello Sport, Bourlart will meet with Girmay’s agent Alex Carera to thrash out a new deal, with Girmay likely to sign a new contract when he returns to Europe for the Eschborn-Frankfurt race in Germany. He will then ride the Giro d’Italia, making his Grand Tour debut in Italy.

Girmay will turn 22 on Saturday and celebrate at home in the Eritrean capital of Asmara with his young family after three months away from home.

"Family is the most important," Girmay told reporters in a press conference in Zedelgem
on Monday before flying to Eritrea from Paris on Tuesday.
"For me, my family is the first thing, even more than the bike, so I have to take care of them.
For three months, my wife has been taking care of the baby and everything. I'm in good shape,
but I'm still following my plan. We will [do the Tour of Flanders] in the future. This is the beginning,
so we have a lot of time."

Girmay was hugely successful as a teenager in cycling-mad Eritrea and joined the UCI World Cycling Centre development programme in 2018. He was one of the few riders to beat Remco Evenepoel in Europe in the Junior ranks after the two attacked together. In 2019, he beat Niccolò Bonifazio and André Greipel in a sprint at the La Tropicale Amissa Bongo and captured the attention of the Delko ProTeam with a win at the Tour du Rwanda.

Team owner Philippe Lannes hosted Girmay in his home for a while but when the French team was hit by funding problems and turmoil in 2021, he agreed to release him in the summer transfer window, accepting a penalty payment of just €70,000.

Girmay opted for Intermarché-Wanty-Gobert instead of bigger teams so he could have opportunities to race for himself. The Belgian team helped him return to form by putting him in the Tour de Pologne and a series of smaller one-day races. He spent some time living in Tuscany with other Eritrean and African riders in 2021 but has recently moved to the San Marino microstate near the Adriatic coast that has reduced the taxes on earnings for sports stars to just seven per cent.

He won the second race of the Challenge Mallorca in Spain and impressed at Paris-Nice despite a crash in the echelons on stage 2.  He was 12th at Milan-San Remo and fifth at E3 Saxo Bank Classic before confirming his talents with a superb display of tactics and sprinting to win Gent-Wevelgem.

Girmay will target a stage victory and possibly the points jersey at the Giro d’Italia and likely to be one of the revelations of the Corsa Rosa.

He is unlikely to ride the Tour de France in just his second season at WorldTour level but
faces a busy end of season as Intermarché-Wanty-Gobert look to score enough ranking
points to ensure they stay as a WorldTour team in 2023.
---------------
Stephen Farrand European Editor
Stephen is the most experienced member of the Cyclingnews team, having reported on professional cycling since 1994. He has held the position of European editor since 2012 and previously worked for Reuters, Shift Active Media, and Cycling Weekly, among other publications.

Girmay's salary set to triple after his Gent-Wevelgem victory