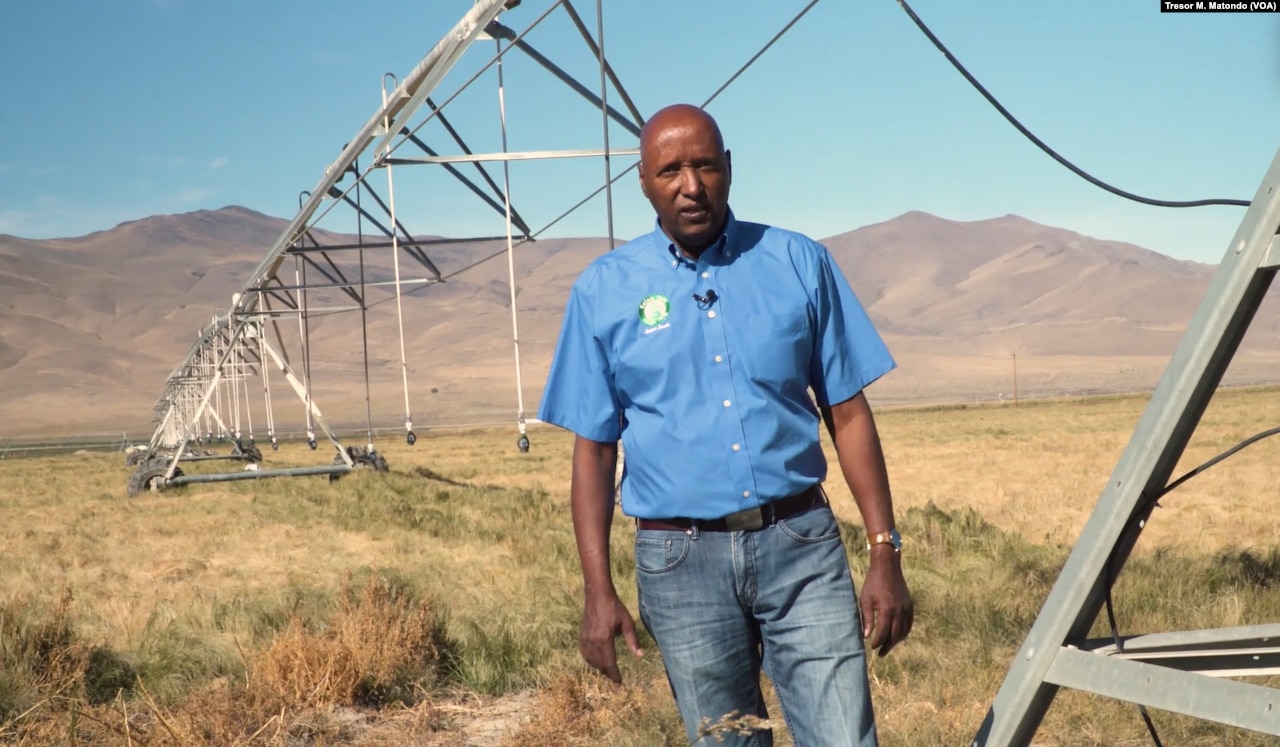 Grower Tesfa Drar stands near irrigation equipment in a field of teff in northeastern Nevada. His company, Selam Foods, sells the ancient grain native to the Horn of Africa, Oct. 2021.
WINNEMUCCA, NEVADA —

Teff, an ancient grain native to the Horn of Africa, has found new enthusiasts in the United States. It’s being cultivated in the American West and Midwest, where growers note its increasing appeal as a gluten-free “super food.”

One of those farmers is Tesfa Drar, who grew up helping his parents raise teff in what is now Eritrea.

When he came to the United States for college in 1981, he missed injera, the spongy, teff-based flatbread that is a staple of the Horn of Africa diet.

“So, I decided to bring 20 pounds [of teff] from home and I planted it at the University of Minnesota, where I was studying,” Tesfa recalled, standing in a field of grain in northern Nevada state. “From there, I gave it to different colleges and universities for research.”

Now his Selam Foods markets the iron-rich grain online, with a website sharing recipes for injera and the history of teff, one of the oldest domesticated plants.

Tesfa cultivates the grain on more than 2,400 hectares of land here in Nevada, in Minnesota – where Selam Foods has its headquarters – and in six other states. His operation here in northwestern Nevada is near Winnemucca, a town that boasts 24-hour casinos as well as a farming community built on growing potatoes, alfalfa, wheat and corn.But now more farmers are moving to capitalize on the growing demand for gluten-free foods by planting teff. Acreage committed to teff production “has exploded” in recent years, according to the University of Nevada-Reno, which says the cereal grass now is grown in at least 25 U.S. states.

Down the road from Tesfa’s place, at Desert Oasis Teff and Grain in Fallon, John Getto and his son Myles say they are growing “ancient grains for modern tastes.” They sell teff by the truckload to wholesale customers in California and in one-pound bags to consumers locally or online.

“Nevada has the perfect climate for teff, which is the nice part,” Myles Getto said. “It is hot. Very, very hot. Very little rainfall, but we do irrigate our teff. It’s just a good climate to grow teff in.”

University of Nevada-Reno researchers are working to develop shorter, more drought-tolerant varieties of teff. John Cushman, a professor who directs the biochemistry graduate program, said that was especially important for farmers in America’s driest state.
“We realized there was a tremendous need for more water-use-efficient crops,” he said, “As the western United States is getting drier and drier due to global climate change, we felt it important to make an investment in some alternate crops.”Bob Dexter added teff to the land he farms along the Carson River.“I wanted to grow something besides cattle food,” said Dexter, who routinely has raised wheat, barley and alfalfa. “… I wanted to raise something that was good food for people to eat. And when I found out about the teff, it looked like a good fit for what we have here to work with in our climate.”Dexter says once its seeds are harvested, teff hay is an attractive feed for horse owners who want to reduce sugars in their animals’ diets.“The horses love the teff hay. It generally has a sweet flavor,” he said, adding that it’s better than alfalfa “because it's low in the carbohydrates that will cause horses to have health issues.

Most teff produced in the United States goes to forage, according to the University of Nevada-Reno. The grain’s versatility adds value for Nevada farmers, Cushman said: “Teff not only provides a high-quality forage for livestock production, but it gives us this very highly nutritious, mineral-rich and gluten-free grain as an added benefit for human consumption.”

CSS Farms added teff to its rotation of potatoes, alfalfa and wheat. General manager Kyle Noise said the company will plant more next season, recognizing the grain’s popularity with many sub-Saharan African immigrants, a fast-growing part of the U.S. population.

“I can see that there is a good need for it going forward, especially with its being gluten free,” he added. “There are a lot of uses for it.”