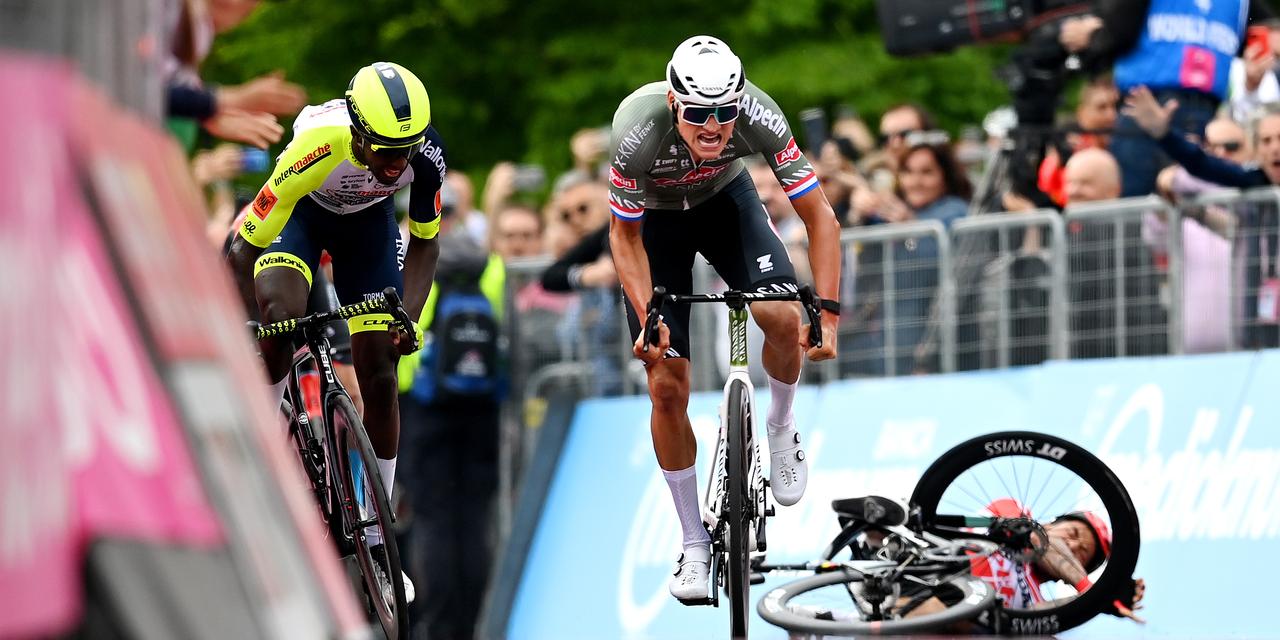 Mathieu van der Poel (Alpecin-Fenix) took victory and with it the pink jersey on the first stage of the 2022 Giro d'Italia, out-duelling Biniam Girmay (Intermarché-Wanty-Gobert) in a hectic hilltop finish at Visegrád in Hungary.

The Dutchman came from behind on the final run to the line to just about edge out the Gent-Wevelgem champion at the line, while further back Caleb Ewan (Lotto Soudal) crashed on the final corner after touching Girmay's wheel as the trio sprinted around the final curve inside the last 50 metres.

"I knew positioning would be the key to win today. It was a bit difficult sometimes I got boxed in a few times on the final climb and it cost a lot of energy to catch the guys in front of me. In the final, I just launched my sprint and it was pretty close because the legs were full of lactate. But I'm really happy," van der Poel said.
Behind Van der Poel and Girmay, it was Pello Bilbao (Bahrain Victorious) who rounded out the podium ahead of Magnus Cort (EF Education-EasyPost) in fourth, the pair not close to victory, though.

In all the chaos of the finish, there was also a split in the peloton from ninth place down, giving Kelderman, Carapaz and Mollema four seconds on the bulk of the peloton, which included GC names such as João Almeida (UAE Team Emirates), Mikel Landa (Bahrain Victorious), and Miguel Angel López (Astana Qazaqstan).

Van der Poel now leads the Giro by four seconds from youth classification leader Girmay ahead of Saturday's time trial in Budapest, while Bilbao is third at six seconds and a further five riders follow at 10 seconds down.

The 105th Giro d'Italia set out from the Hungarian city of Budapest in a first for the race as the peloton took on a 195km ride from the capital to the hilltop fort at Visegrád. Aside from the uphill finish (5.5km at 4.2 per cent), there would be few other obstacles during a day which was almost entirely raced over flat or rolling roads.

As was befitting a stage profile which hardly encouraged action before the final climb to the finish, much of the day was characterised by a near-total absence of events. After race director Stefano Allocchio dropped the flag to signal the start of the stage, two Drone Hopper-Androni Giocattoli riders rode away from the peloton and that was that – the breakaway of the day sorted within seconds.

Mattia Bais and Filippo Tagliani were the lucky pair, riding off up the road towards their meagre rewards – TV time for the team's catalogue of sponsors, two intermediate sprints, and an early lead in the races two breakaway classifications, the fighting spirit and Fuga Pinarello prizes.

The duo were three minutes up the road after 10km, 7:30 up after 20km, and 11 minutes up after 30km as the peloton rolled along at crawling pace with Alpecin-Fenix and Intermarché-Wanty-Gobert at the head of affairs.

If the day's first intermediate sprint at Székesfehérvár, 75km into the stage, promised one of the rationed doses of excitement during the day, it came and went in a flash as the two leaders rolled through while Giacomo Nizzolo (Israel-Premier Tech) grabbed six points from the peloton ahead of Arnaud Démare (Groupama-FDJ) on five and Mark Cavendish (QuickStep-AlphaVinyl) on three.

In the meantime, the dash for the sprint had reduced the break's advantage to 4:30, a figure that would only ebb away as the riders covered the final 100 kilometres or so of the opening stage.

Continuing the running theme of the day, little went on between the 100km to go mark and the second intermediate sprint at Esztergom (this one with bonus seconds up for grabs, rather than points). Out front, Bais and Tagliani continued what would ultimately be a futile effort.

The Italian pair hit the final 40km with just 1:20 in hand on the peloton, which saw a numver of different teams taking charge, including Intermarché-Wanty-Gobert, QuickStep-AlphaVinyl, Lotto Soudal, and Team DSM.

In a reversal of the first intermediate sprint, Bais led Tagliani over the line in Esztergom, while there was no contest in the peloton, which at that point lay just 30 seconds back.

The catch was made, finally, with just under 14km left to run, while the lead of the race was thereafter shared among several teams fanned out across the road. The usual suspects from earlier in the day were joined by riders from Eolo-Kometa, UAE Team Emirates, and EF Education-EasyPost as the peloton raced towards the final climb.

Lotto Soudal led the way onto the hill, controlling the pace for their sprinter Caleb Ewan, while Alpecin-Fenix and Intermarché-Wanty-Gobert quickly moved up a few hundred metres later on behalf of Mathieu van der Poel and Biniam Girmay.

At the 3.6km mark, Lawrence Naesen (AG2R Citroën) was the first to launch an attack on the clim, leading Ineos Grenadiers to take up the chase. The Belgian lasted just over a kilometre out front, at which point Lennard Kämna (Bora-Hansgrohe) attacked past him as Davide Ballerini (QuickStep-AlphaVinyl) was caught up in a crash in the peloton.

Kämna's move was a strong one, with the German holding a seven-second advantage as he hit the final kilometre, though he would only last another 100 metres as Davide Formolo (UAE Team Emirates) sped past with the peloton in his wheel.

The Italian was joined at the front by favourites Girmay and Van der Poel, GC men like Carapaz, and a lone sprinter in Ewan, setting up a grand final 500 metres. That final sprint was launched at around 150 metres to go after Cort had hit the front, with Ewan taking to the right-hand side against the barrier, Girmay sprinting through the middle, and Van der Poel heading to the left.

In the end, it was the Dutchman who had made the right move, his powerful burst just proving too much for Girmay. The Eritrean was close but just lacked that finishing jump, while he didn't look to be hindered by Ewan touching his wheel and sliding out.

Giro d'Italia: Van der Poel wins crash-marred uphill sprint in Visegrád, takes first maglia rosa
CYCLING
GIRO D'ITALIA | BINIAM GIRMAY 'VERY HAPPY' WITH SECOND PLACE AND WHITE JERSEY
Biniam Girmay was previously regarded as the great challenger to Mathieu van der Poel and he was almost too quick for the Dutchman, but he passed in extremis. Yet he is not in sackcloth with his second place. "I'm very happy!" The Eritrean also retained the white jersey as the leader of the youth classification during the stage.
Giro d'Italia | Biniam Girmay
Back to Dehai News