OPINION: MATHIEU VAN DER POEL AND BINIAM GIRMAY EXTEND STELLAR SPRING FORM INTO GIRO D'ITALIA
If Grand Tour opening stages are notoriously hard to predict there was something of the inevitable about Mathieu van der Poel’s victory beside the ramparts of the castle at Visegrad on Friday. And it was all the more fitting that it should come alongside another one of the spring’s key animators – and fellow Giro d’Italia debutant – Biniam Girmay.

BY
FELIX LOWE
PUBLISHED 06/05/2022 AT 20:45 GMT+2
Mathieu van der Poel and Biniam Girmay are so strong their rivals are literally falling over trying to follow them.
On an opening day of the Giro where much of the pre-stage debate surrounded the likelihood of the sprinters’ ability to get up the final climb, the race’s first maglia rosa was still contested by three of the peloton’s fastest finishers.
Mark Cavendish had checked himself out of contention long before the road to the castle at Visegrad tilted up to its maximum eight percent; Arnaud Demare, for all his Poggio prowess, did not go the distance, while Fernando Gaviria was one of the last to let the elastic snap.
But after the thrills and spills that saw both Lawrence Naesen and Lennard Kamna try gutsy long-range attacks, and Cavendish’s Quick-Step Alpha Vinyl team-mate Davide Ballerini crash out of the reckoning, came the moment that, in retrospect, seemed utterly inescapable.
Spoiler: it didn’t include Mathieu van der Poel. Or if it did, none of us could see him – perhaps on account of that olive green camouflage jersey, which worked a treat as Alpecin-Fenix’s main man ghosted past his fading colleagues, biding his time and keeping his powder dry until the last possible moment.
No, the slap in the face came when Girmay and Ewan found themselves on the front inside the last few hundred metres and it all dawned on us that, of course, the in-form Eritrean and his pocket-rocket Australian counterpart had the uphill armoury to last the course.
When they struck out for the line, Van der Poel was forced to give up his back seat and to react. The 27-year-old Dutchman won on a similar slope at Mur de Bretagne in his debut Tour de France last year on his way to a maiden maillot jaune. But he did so from the front, having already taken bonus seconds on the first ascent of the climb.
This time, Van der Poel came from behind with all the venom of a rider who earlier this spring added a second Tour of Flanders triumph to his name. It was somewhat fitting that the man he needed to beat to ensure the win was another rider who had enjoyed something of a flourishing spring: Girmay, whose victory at Gent-Wevelgem was a first ever for an African in a cobbled classic. 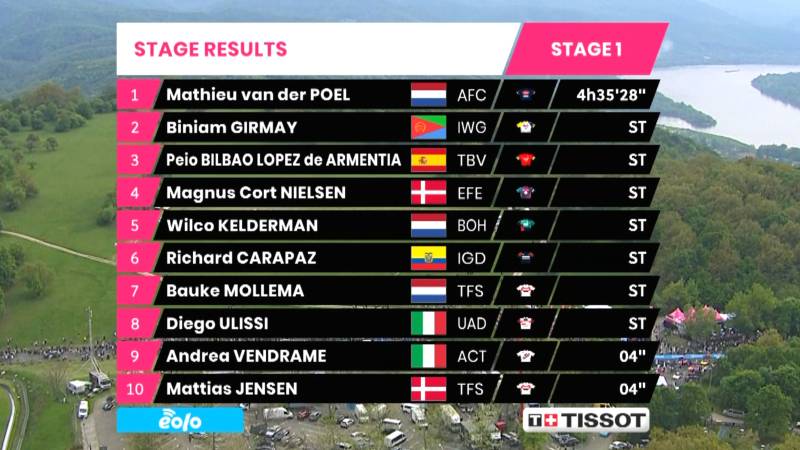 Van der Poel and Girmay are both making their debuts at the Giro but treated their Corsa Rosa curtain-raiser as if they were old hands at this game. Relatively speaking, Van der Poel is an old hand – his eventful week in France last July filled with more experiences than some achieve in an entire career. That perhaps makes what Girmay did out there under the Hungarian sun all the more impressive – for this was his first roll of the Grand Tour dice, at an age considerably younger than his counterpart, with a result far more impressive than Van der Poel’s own 20th place finish in the opening stage of the 2021 Tour.
For a brief moment it looked like the 22-year-old Eritrean had written himself another fine chapter in his meteoric rise; another historic moment for African cycling, and a feel-good result to be savoured by all. Victory and the pink jersey at the first time of asking would have been a fitting reward for a rider whose presence we will surely see atop the podium over the next couple of weeks.
But for all Girmay’s grit, Van der Poel is from another planet. Like Taylor Swift, the indefatigable Dutchman has a knack of delivering hit after hit; like Tyson Fury, no one can knock him down; like Midas, whatever he touches turns to gold – or, at least, turns to whatever colour the relevant race represents. So, after delivering the yellow jersey that always eluded his grandfather Raymond Poulidor, it was only natural that Van der Poel should become Van der Pink.

Of course, it was harder than simply deciding he’d like to change jerseys. As Van der Poel admitted afterwards, he found himself boxed in on the final climb and needed to dig deep to fight back into contention. But where other riders would have thrown in the towel, Van der Poel – by far the most talented all-round rider of his or any generation in the current pro peloton – found what he needed to deny what would have been an equally deserved victory for Girmay.
The two were head and shoulders above the others – so much so that Ewan, who had done admirably to stay in contention on the climb, made the rookie mistake of touching his front wheel to the back wheel of Girmay with the finish line gaping. The Australian hit the deck hard but will live to contest another day.
At this point it’s worth noting that this is not the first time Ewan has ended up in a heap on the finishing straight after a freak accident. Something similar happened in Stage 3 of the Tour last year, ending his race and with it his plans to ride all three Grand Tours in 2021.
That latest DNF meant the Lotto Soudal sprinter has only finished two of his eight Grand Tours to date. And he won’t finish this one, either. He said as much: Ewan aims to pack his bags and concentrate on his preparation for the Tour once he’s picked up a win or two. There’s no shame in that. But you sense both Van der Poel and Girmay will stick things out a little longer at this Giro. One of them may even bring home the maglia ciclamino. But for now, it’s not purple that adorns their respective jerseys.
Van der Poel’s latest triumph means his Alpecin-Fenix team have now won the opening sprint of the previous four Grand Tours: after Tim Merlier’s Giro-Tour double, fellow Belgian Jasper Philipsen kept the run going at the 2021 Vuelta. If it’s amazing that Van der Poel was not part of that run previously, it’s somewhat inexorable that he is now.
Stars of the spring, Van der Poel and Girmay, in pink and white, are on course to become stars of this early summer, too. And we’ve yet to even touch foot on Italian soil.
- - -
Stream the Giro d'Italia live and on-demand on discovery+. You can also watch all the action live on eurosport.co.uk