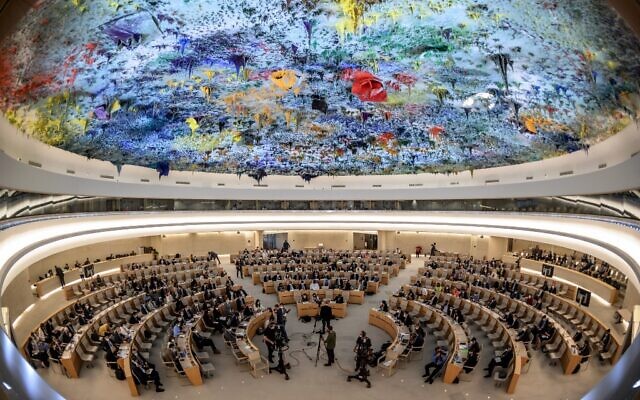 A general view of the room hosting a special session of the UN Human Rights Council on Ukraine, in Geneva, on May 12, 2022. (Fabrice Coffrini/AFP)

GENEVA — The United Nations Human Rights Council voted overwhelmingly on Thursday to launch an inquiry into alleged serious violations committed by Russian troops in Ukraine, putting their conduct further under the microscope.

Concerned by extrajudicial executions, civilian casualties, the use of torture and abuses against children, the council voted 33-2 to create an investigation into alleged violations, with a view to holding the perpetrators to account.

China and Eritrea voted against the resolution, while 12 countries — including India, Pakistan and Cuba — abstained. Russia branded the extraordinary meeting of the UN’s top rights body a politicized stunt and refused to attend.

Russia was committing “the most gruesome human rights violations on the European continent in decades,” she said, speaking from Kyiv. “These have been 10 weeks of sheer horror to the people of my country.”

“Torture and enforced disappearances, sexual and gender-based violence; the list of Russia’s crimes is endless,” she added. “Only the world standing strong in solidarity with the Ukrainian people can defeat this pure evil.”

The UN’s top rights body voted on March 4 to trigger a commission of inquiry (COI) — the highest possible level of investigation — into alleged Russian violations during the war.

The suburb of Bucha, north of Kyiv, became synonymous with allegations of Russian war crimes when dozens of bodies in civilian clothing were found there in early April, some with their hands tied, after Moscow’s troops pulled back.

Other allegations have come to light elsewhere in the country.

Thursday’s resolution asked the COI to prioritize an investigation “to address the events in the areas of Kyiv, Chernihiv, Kharkiv and Sumy regions in late February and March… with a view to holding those responsible to account.”

The resolution asks the COI to brief the council about its progress at the September regular session, and to include the complete findings in its report to the March 2023 session.

The resolution also urges Moscow to give humanitarians unhindered access to people transferred to Russia or Russian-held territory — and provide a comprehensive list of their names and whereabouts.

Russia was among the 47 Human Rights Council members until the UN General Assembly in New York voted on April 7 to suspend it from the body. Russia then immediately withdrew from the council. Thursday’s session was the first meeting of the body since then.

Now an ordinary observer, Russia was called to give its version of events but its chair was vacant.

Russian Ambassador Gennady Gatilov said his country would not participate in a “political rout to demonize Russia” and branded the council biased.

“It is doubtful that the participants of this stunt will call for a real, instead of a showcase, investigation of the tragedy in Bucha,” he said in a Twitter video. 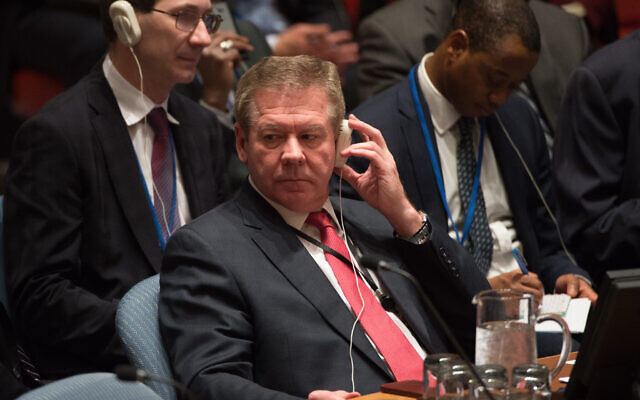 UN human rights chief Michelle Bachelet told the council that her office was verifying allegations of international human rights and humanitarian law violations, “many of which may amount to war crimes.”

“The scale of unlawful killings, including indicia of summary executions in areas to the north of Kyiv, is shocking,” she said, citing 300 deaths so far — many of them seemingly intentional.

US Ambassador Michele Taylor said that Russia’s frustrations at being unable to defeat Ukraine militarily had led to “ever-more-egregious human rights abuses.”