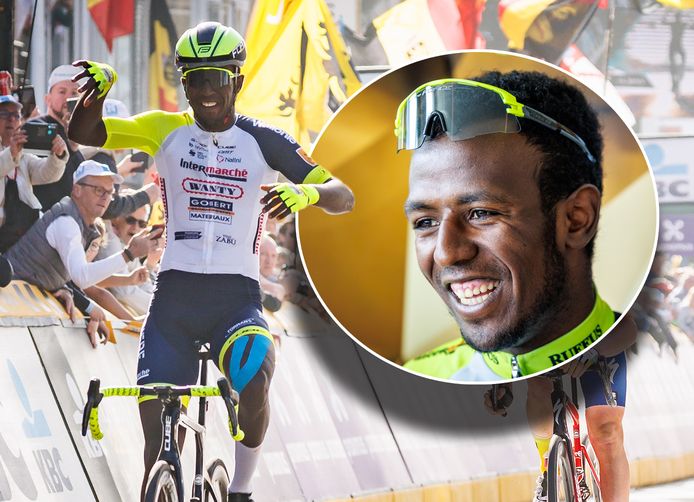 Biniam Girmay intends to ride the second half of the Giro d'Italia as he did the first, chasing a stage victory, chasing points for the ciclamino jersey, shrugging off any criticism from his rivals and insisting he is own man, not another version of Mathieu van der Poel and Wout van Aert.

"I'm the new Biniam, I'm not the new Van der Poel or new Van Aert. I'm myself," Girmay said via video during Monday's rest day, both his natural happiness and the sprinter's ambition shining through in everything he said.

"I'm flattered if I'm compared to them," he added. "We're similar in many ways but we're different too. They can time trial better than me and Van Aert can climb better than me.

"This is also only my third year as a professional rider. When I was a junior I used to admire and watch them but now I race with them and try to fight with them to win."

Girmay has only been in the spotlight since winning Gent-Wevelgem in the spring and
has only been racing at WorldTour level since Intermarché-Wanty Gobert signed him from
Delko last summer but he is a fast learner.
He learned how to outwit his Classics rivals in Wevelgem and is rapidly learning how to contest the sprints in the Giro d'Italia. He used the same quick thinking to avoid a polemic with Van der Poel after both missed out on victory in Naples on Saturday.

Van der Poel was arguably over-aggressive his own downfall while Girmay appeared to be under orders to sit on the Dutchman's wheel in the hope of getting a free ride up to the Thomas De Gendt breakaway and then to victory on the Naples seafront.

Van der Poel refused to tow Girmay to the line and posted a cheeky laughing emoji below a story on the Wielerflits website that quoted Girmay as saying: "Everyone looked at Mathieu and me".

Girmay was quizzed about the tweet on Tuesday but sidestepped any polemics as deftly as he can dive around a sprint rival in sight of the finish line.

"I didn't see his reaction and we didn't talk during Sunday's stage because he was up front and I was at the back. But it's cycling, it can happen," Girmay said slightly defiantly.

"I tried my best on the stage. I just tried to catch the group, I didn't play games or want to help him. Saturday was about the legs, moving in the race and controlling the attacks, I didn't have the legs to close the gap to De Gendt."

The Intermarché-Wanty-Gobert rider finished second to Van der Poel in Visegrád, fourth in Balatonfüred behind Mark Cavendish, fifth in Messina and fifth in Naples on Saturday. A stage win remains elusive but remains Girmay's first objective.

"If I win one stage that's enough, that's the main goal. The first goal is to finish the Giro, the second is to win one stage," he insisted.

Eritrea is going crazy about Girmay's success and the African nation celebrates its Independence Day on May 24. That is the day of stage 16 to Aprica in the mountains but Girmay hopes to celebrate before then.

"There's a lot of chances this next week. I can't win on Independence Day but maybe Merhawi Kudus or Natnael Tesfatsion can win that day. I hope to win before that day.

"I've had five top fives so far. That's good. I learned something on every stage but you need the legs to win. Sometimes you're lucky and other times not. Hopefully things will go my way soon."

Girmay has chased sprint wins and points in the intermediate sprints. The cyclamen-coloured jersey appears to be a battle between the Eritrean and France's Arnaud Démare (Groupama-FDJ).

Démare will wear the jersey on Tuesday's 196km stage up the Adriatic coast and then into the Marche hills. Girmay is hoping to be in the action, while some of the pure sprinters could be dropped.

"I got in the break on Saturday and survived the climbs to take points, so the ciclamino jersey is possible," he said.

"We're only half way into the Giro so I'm starting to feel pain in the legs, so we'll see what happens next week. The main target is still to win one stage and then if I can, I'll try to win the ciclamino jersey too. I'm still fighting to win, that's the main goal."