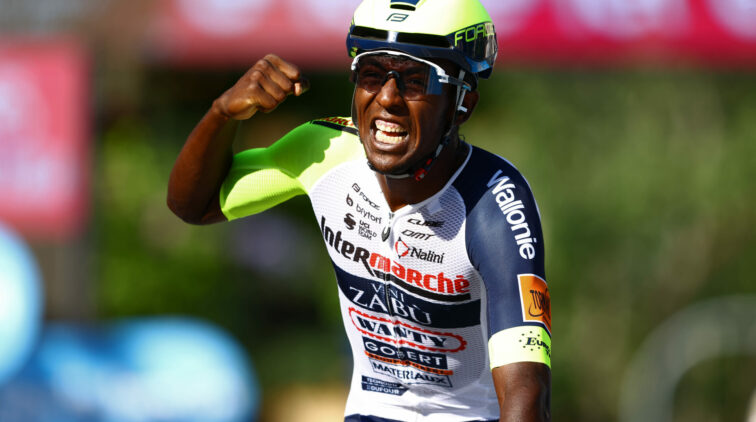 GIROBiniam Girmay has won the tenth stage in the Giro d'Italia. In a sprint he was just a little faster than Mathieu van der Poel after a stage over 194 kilometers. He is the first black African stage winner.

The first hundred kilometers of the 194 kilometer long stage did not immediately invite you to make a race on paper, and that did not happen. Along the Adriatic coast, Alessandro De Marchi, Mattia Bais and Lawrence Naesen were given plenty of room by the pack to take the lead. Not much happened until the hill zone turned up.

In the second part of the stage, Caleb Ewan had to release early when it got more hilly. At the same time, Richard Carapaz also drove from behind, who had fallen out of the cameras' view and was sitting on the bike, battered. Mathieu van der Poel also did not have a flawless preparation for the final due to material problems, but the winner of the opening stage was able to continue his way quickly.

Alpecin-Fenix ​​and Intermarché-Wanty Gobert made sure that with 25 kilometers to go, two of the three attackers were taken back. Only veteran De Marchi, winner of three Vuelta stages but never accurate in the Giro, managed to hold out longer. His adventure came to an end with twenty kilometers to go, which resulted in an almost complete rush for the last hurdle of the day, a four kilometer climb to Monsano.

Tobias Foss opened the ball on the climb to Monsano, but the Norwegian champion was soon taken back by the men of Alpecin-Fenix. More attack attempts followed, except for an attempt by Alessandro Covi, which suddenly made things look good for Girmay. The winner of Gent-Wevelgem could count on the support of no fewer than three teammates in the thinned out group, although he almost made a mistake by turning left straight ahead at a bend. It went well, after which Van der Poel tried it in the descent and got Simon Yates, Davide Formolo and Giulio Ciccone along. Van der Poel was left alone, but in the end kept his legs still.

It turned into a sprint. Girmay went from very far and seemed to be overtaken by Van der Poel, but the Eritrean fought back and put Van der Poel on it. With a sporty thumbs, Van der Poel resigned himself to second place. Afterwards, he was immediately there to congratulate Girmay on his historic victory.