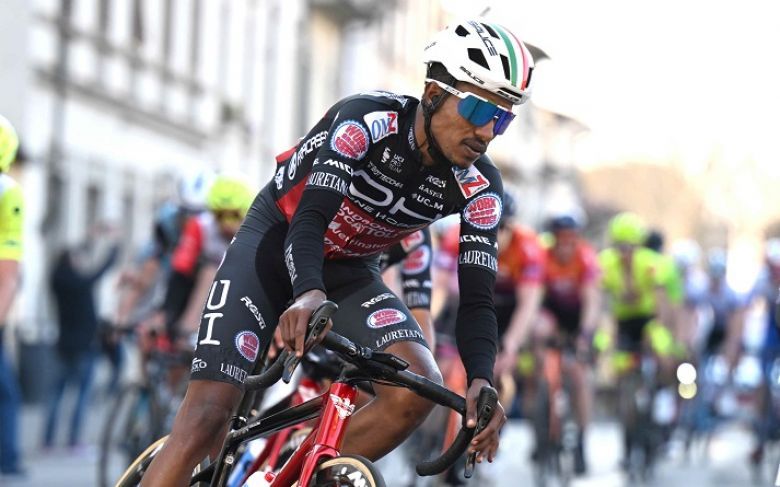 Transfer - Natnael Tesfatsion in the sights of Trek-Segafredo?

Published on05/17/2022 at 07:07by Clément LABAT-GEST
Author of great performances on the 105th Tour of Italy, including a top 10 on the 5th stage (8th),  Natnael Tesfatsion (Drone Hopper-Androni Giocattoli) would have caught the eye of a World Tour team: Trek -Segafredo . At least that's what La Gazzetta dello Sport reveals , through its journalist Ciro Scognamiglio , who is always well informed about transfer rumours. As a reminder, the 22-year-old Eritrean rider, who won the general classification of the Tour of Rwanda 2022, is coming to the end of his contract at the end of the season and would therefore be ready to take a new step in his career by discovering the World Round. To be continued...
---

Natnael Tesfatsion is currently still playing for Drone Hopper-Androni Giocattoli, but according to the Italian sports newspaper La Gazzetta dello Sport, there is interest in the 22-year-old Eritrean from the WorldTour. It would be Trek-Segafredo.

It is the usually well-introduced sports journalist Ciro Scognamiglio who comes with the news. According to Scognamiglio, there is a chance that Tesfatsion will play at the highest level next year. The promising rider is associated with the American cycling team Trek-Segafredo, the employer of Bauke Mollema and Jasper Stuyven, among others.

That Tesfatsion is doing well in the market is no surprise given its current development. The Eritrean is in his second season as a professional cyclist and has already collected the necessary places of honor, certainly this year. He was fourth in the GP Industria, ninth in the Settimana Internazionale Coppi e Bartali and he also made a name for himself in the Tour of the Alps. Tesfatsion started the season with overall victory in the Tour du Rwanda.

The fast Tesfatsion, who also holds his own uphill, is currently working on his second Giro d'Italia. He has already been noticed several times in the attack, but also finished eighth in the sprinter's stage to Messina, for example. Last Sunday he made an impression in the early break in the mountain stage to Blockhaus, but crashed in a descent at high speed. Tesfatsion, however, escaped unscathed.