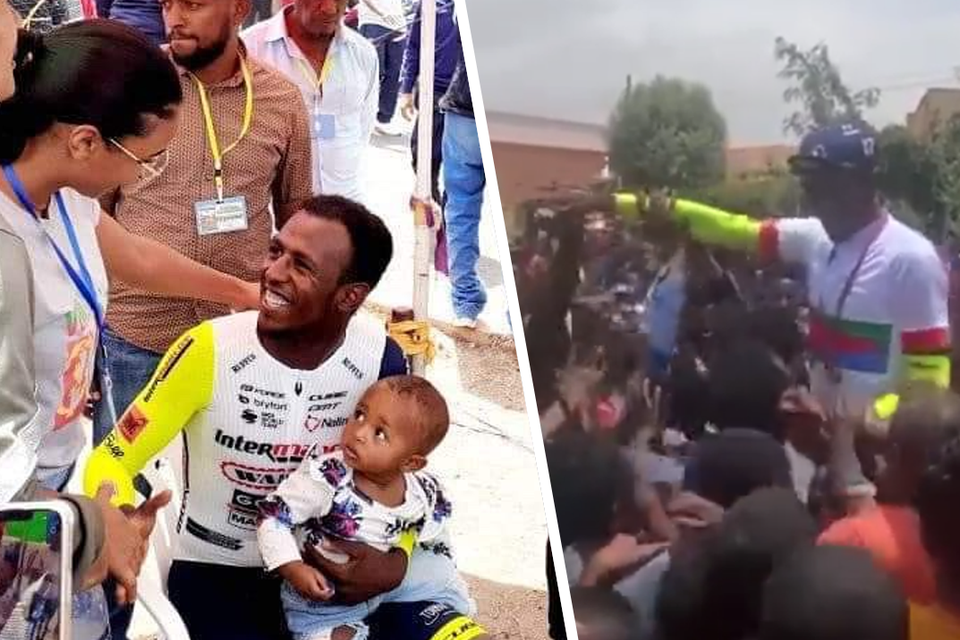 Biniam Girmay immediately became Eritrean time trial champion on his return after the cork incident. It was his first race since his retirement in the Giro. In his home city of Asmara, he was celebrated like a king.

A little more than a month after he had to quit the Giro d’Italia injured, Biniam Girmay has returned to racing with a victory on home soil in Eritrea in the National Time Trial Championships.

The Intermarché-Wanty-Gobert leader was previously seen in race action in the Giro d'Italia when Girmay claimed the first ever stage win for a Black African in a Grand Tour in May, outsprinting Mathieu van der Poel (Alpecin-Fenix) for a history victory on stage 10 in the town of Jesi.

This year, in a major step-up for the 22-year-old in his one-day racing campaign, he had already won Gent-Wevelgem and finished fifth two days before in the E3-Harelbeke.
However, he then had to abandon the Giro d’Italia almost immediately after his stage victory because of an incident during the winner’s ceremony when opening a prosecco bottle and the cork injured him in one eye.

Diagnosed with a haemorrhage in the anterior chamber of his left eye, a week after the accident, fresh medical tests determined that Girmay had escaped without permanent damage to his eye, although a total period of nearly three weeks off the bike had to be observed.

Best known as a sprinter and Classics racer, Girmay’s time trial victory provided yet more evidence of his versatility as a racer as it comes on his first ever participation in the event.

His victory in the TT event in the capital city of Asmara came ahead of defending champion Merhawi Kudus (EF Education-EasyPost) and 2019 winner Amanuel Gebreigzabhier (Trek-Segafredo).

After his fourth win of the season, Girmay will now take part in the road race on Sunday. While the Tour de France was not on his program, will return to racing in Europe at the Tour de Pologne, a race he already took part in last year, before heading to the Canadian WorldTour races

Biniam Girmay is making his comeback this week after cork inciden

The king is back: Biniam Girmay is Eritrean time trial champion…