VIDEO. Biniam Girmay falls again in Franco-Belge and is angry with Mozzato

CYCLINGAlexander Kristoff has won the Circuit Franco-Belge 2022. The Norwegian from Intermarché-Wanty-Gobert defeated our compatriots Dries Van Gestel and Victor Campenaerts. Top favorite Biniam Girmay gave up after a crash, but did not sustain any fractures. 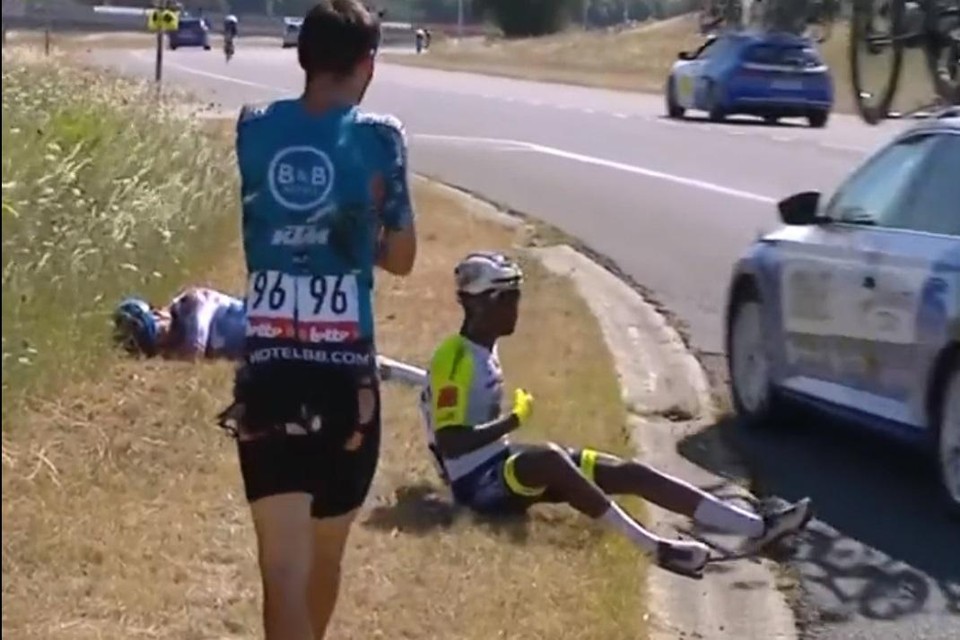 The Eritrean Binian Girmay (Intermarché-Wanty Gobert) fell in the Franco-Belge at kilometer from the finish together with Giacomo Nizzolo and had to give up. Girmay also fell in the Tour de Wallonia. He did not appear to have any serious injuries, but was very angry with Italian Luca Mozzato.

Today the 81st edition of the Circuit Franco-Belge was on the program. The organization was able to unpack with a good list of participants, because Fabio Jakobsen, Victor Campenaerts, Arnaud De Lie (who defended his leader place in the Exterioo Cycling Cup, ed.), Caleb Ewan, Greg Van Avermaet and Biniam Girmay, among others, appeared at the start. Last year, Jakobsen was the first to cross the finish line in Tournai, but for this edition it switched places to start and finish with La Louvière. The course was therefore more difficult than usual.

Ayco Bastiaens (Alpecin-Deceuninck), Timo De Jong (Volkerwessels Cycling Team), Tim Naberman (DSM) and Tom Sexton (Bolton Equities Black Spoke Pro Cycling) quickly chose the harepath, but the four never got much free-conduct. Top favorite Biniam Girmay kissed the asphalt in the peloton. He hit the ground at a speed of 70 km/h. The Eritrean has many abrasions and burns on the hip, but fortunately did not sustain any fractures. Outsiders Nizzolo and Mozatto also fell hard. Mozatto was able to continue his journey, but unfortunately Girmay and Nizzolo had to give up. Fabio Jakobsen was unlucky again and never returned to the race. 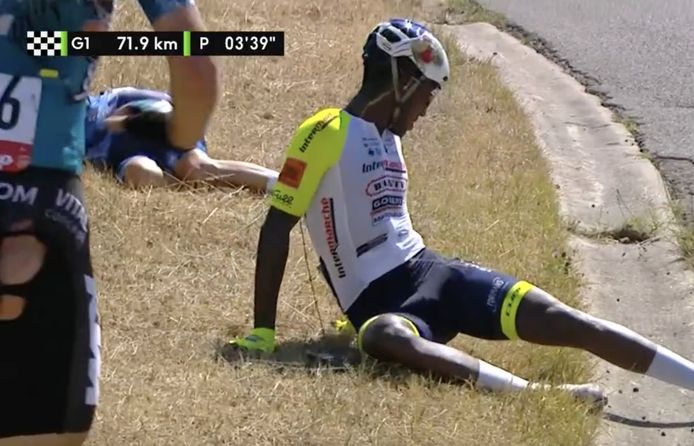 Due to the selective course, many riders felt their legs itch relatively early. Campenaerts, Van Moer and Van Avermaet, among others, already pushed through at 70 kilometers from the finish. Filippo Baroncini, the U23 world champion, made a first selection in the penultimate round. The Italian got our compatriot Loïc Vliegen with him. Campenaerts, Theuns and De Bondt were still able to make the crossing. But moments later, Van Avermaet, De Lie and Vanmarcke also joined.

In the final round, Van Gestel, De Buyst and Kristoff were the first to throw the bat into the henhouse and nobody seemed to be coming back, but that was not counting on a very strong Victor Campenaerts who came in with a phenomenal effort. Campenaerts started from afar, but it was Kristoff who knocked him on the line. Another victory for Intermarché after a crash by their leader Girmay. The last time Girmay made a tumble, Jan Bakelants won the final stage in the Tour of Wallonia. 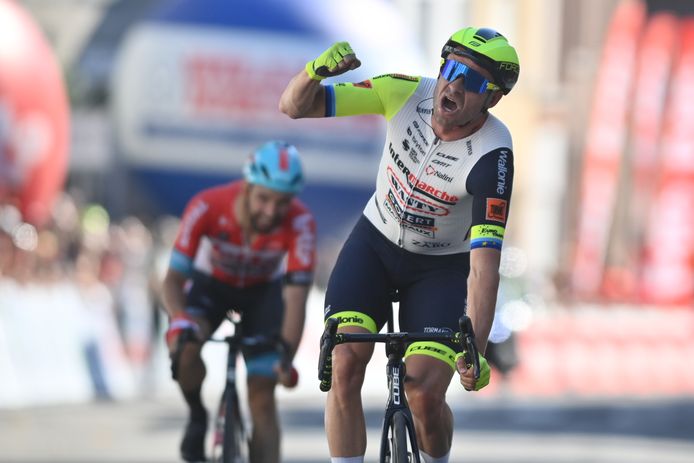 While Victor Campenaerts put Zdenek Stybar on Sunday in Leuven in the sprint, it failed in La Louvière with Alexander Kristoff and Dries Van Gestel. Campenaerts again did not feel his legs and accelerated on every slope. In the final lap he was the only one in the peloton to jump to the leading trio Kristoff, Van Gestel and his teammate Jasper De Buyst. “Jasper had indicated that the best was off. I tried to go over it, but that lepe Van Gestel had it in mind and did not take over, so that Kristoff could also return," says Campenaerts, who then tried it on the surprise in the sprint. “I started four hundred meters from the finish and was given five meters of space. Behind me I heard them creak, but you can never really break Kristoff. He may release two more times and die, he will never give up.” 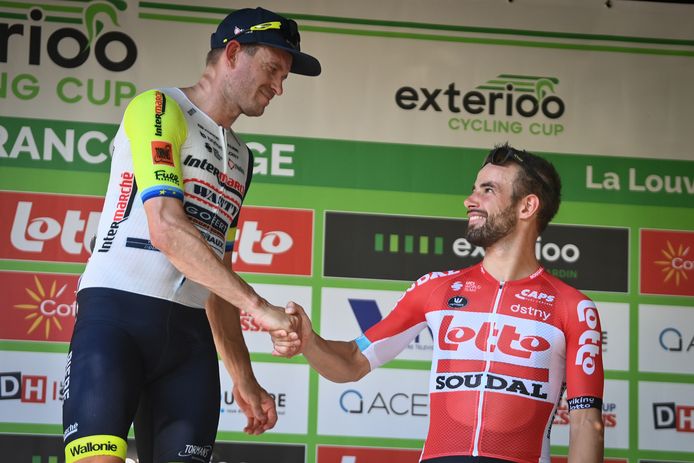 After his fifth place in the Tour of Wallonia, Greg Van Avermaet finished ninth in Franco Belge. Twice top ten in a row, that was from March 2021 ago. On the way, the leader of AG2R-Citroën had also been noticed with some sharp attacks. Will he resurface thanks to his favorite warm weather? “These temperatures are extreme for me too. When I saw the course before the start I was a little disappointed that it was only 175 kilometers, but during the course I was happy with such a short course. I really gave up.”

Van Avermaet looks a bit tired, but that is exactly the intention. “I trained hard in July. Back to the way I used to. I feel less fresh, but in the race I do better. My level isn't quite what it should be yet, but I'm on the right track. I want to confirm with top ten places in the coming weeks. Afterwards I hope to grow to the podium and maybe even a victory. Winning again this year would be a dream”, says Van Avermaet, who peaks at the beginning of September with the GPs of Quebec and Montréal. “Before that I ride the Tour of the Limousin, Hamburg and the Tour of Germany. 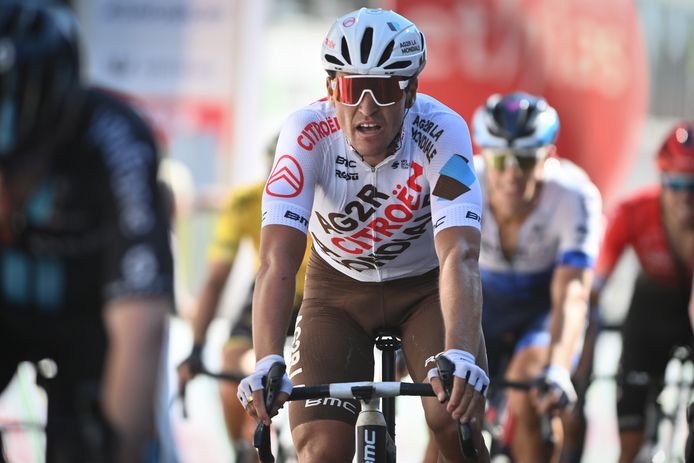 Biniam Girmay: the Eritrean has to give up after falling ...

twitter.com/Eurosport_NL
Back to Dehai News