For the 3rd time in a row, the Eritrean Biniam Girmay has been elected African cyclist of the year. He thus won this trophy created eleven years ago by the organizers of the Tropicale Amissa Bongo with the aim of helping the development of African cycling by rewarding the rider from the continent who has achieved the best performances of the season and succeeded, through his influence, to make African cycling known on the world stage. 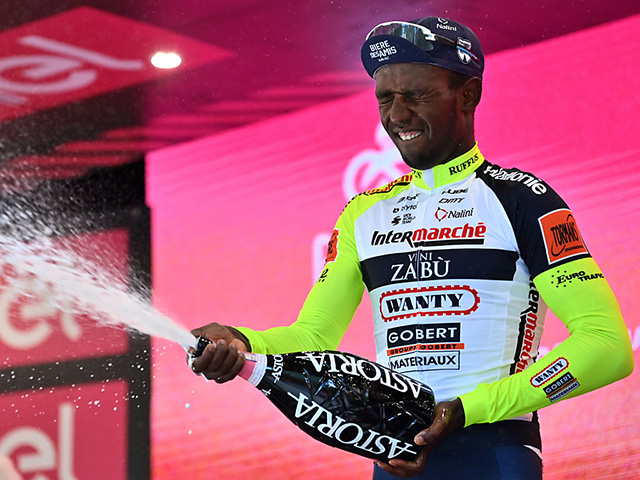 Eritrean Biniam Girmay, celebrating one of his victories. © Keystone/AP/Massimo Paolone

While waiting for the 16th edition of the Tropicale Amissa Bongo which will take place from January 23 to 29, 2023, the organizers of this competition of the International Cycling Union (UCI) published, on December 13, the name of the African Cyclist of the year. The prize goes to Biniam Girmay who stands out for the third consecutive year. The Eritrean won the 11th Trophy and immediately became the first to score a hat-trick.

The organizers of the Tropicale Amissa Bongo who present this trophy ensure that " Biniam Girmay owes this distinction to its historic successes in Ghent-Wevelgem (Belgium) and on its stage in the Tour of Italy ". “ Never before had an African runner achieved such a performance. This is the seventh time in eleven editions that an Eritrean rider has won this Trophy ,” they said.

“ As for the first two trophies, I feel immense pride ,” reacted the champion.

As in 2020 and 2021, Biniam Girmay obtained the highest number of votes from the jury chaired by the five-time winner of the Tour de France, Bernard Hinault, and composed of twenty-five members including riders, coaches and African leaders, organizers of cycling events on the continent, but also specialized journalists, African and European, who follow all cycling races in Africa.