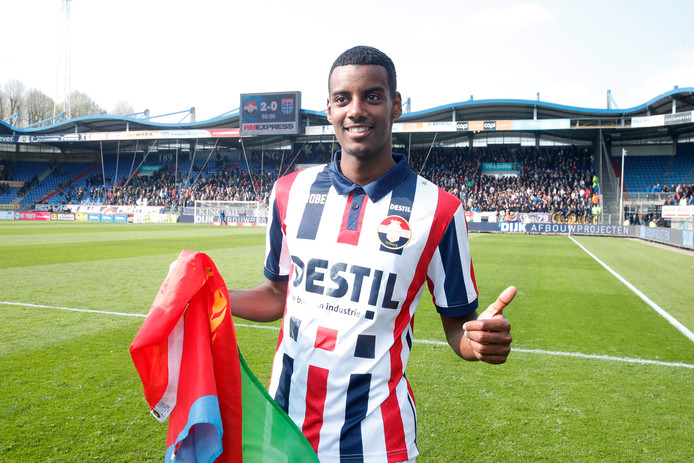 VIDEOWillem II striker Alexander Isak made his twelfth goal in twelve duels against PEC Zwolle (2-0). The 19-year-old attacker did so under the watchful eye of a group of fans from Eritrea.

Rob Aarts Apr. 15 2019
The fans had come to the King Willem II Stadium especially for Isak, a Swede with Eritrean roots. "There were a lot of people watching the game and supporting me," saw Isak, who afterwards threw his shirt in the box with the fans from Eritrea. They saw their favorite player give an assist, score a goal, but also miss a penalty. "I am very proud and it was great to see."
Willem II experienced a carefree afternoon and won relatively easily from the team of coach Jaap Stam. In addition to Isak, the name of Damil Dankerlui also appeared on the scoreboard. ,, Of course I am very happy that I can contribute to the team with goals. I think we played well today and we showed from the start that we wanted to control the game. I felt good.
”

Eritrean fans
Isak was directly involved in the last eleven goals of Willem II (eight goals, three assists). Fans from Eritrea where he has his roots, fanatically encouraged him from the stands in the match against Zwolle and gave him a flag. Isak, in turn, threw his shirt at the Eritrean fans. He is the son of Eritrean parents.

Isak is also the first player to find the net in seven consecutive Premier League matches since Vincent Janssen did for AZ in the 2015-2016 season. It is a club record for Willem II, according to Gracenote data agency. Thanks to his goal and an assist, Willem II won 2-0 against PEC Zwolle.

Five Dutch players scored twelve or more goals in their first twelve league games. Hans Venneker was the last to deliver such a piece of art in the 1964-1965 season. At that time he made sixteen for Feyenoord.