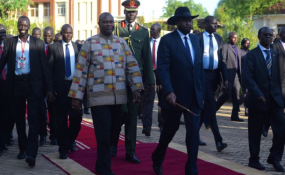 A lack of political will, financing and time constraints were the reasons for the power-sharing agreement's delay, but both sides said they were still committed to peace.

Representatives for President Salva Kiir and rival rebel leader Riek Machar agreed to delay the formation of a power-sharing government after dicussions led to an impasse.

The two sides had gathered for talks in Ethiopia to salvage a 2018 peace deal that sought to end years of civil war triggered in 2013, when the Kiir and Machar became rivals and just two years after the country declared independence.

Both men had signed a power-sharing agreement in September, which had a deadline of May 12. The core of the deal called for Machar to be reinstated as vice president. But this will now be delayed for six months.

"The Parties identified lack of political will, financing and time constraints as the major challenges that have delayed implementation of the Pre-Transitional tasks," the Intergovernmental Authority on Development (IGAD), a regional bloc moderating the talks, said in a statement on Friday.

Officials in the talks said that of the 59 key tasks that required implementation before the May 12 deadline, only 27 had been completed. The remaining 17 were ongoing, with 15 items that had not been evaluated.

Machar's representatives said the six-month delay was needed to resolve security and other issues that allegedly prevent him from returning to Juba from exile, which he fled in 2016 when a prior peace agreement had collapsed.

"Today's decision to extend the pre-transitional period averts any thinking that we will revert to turmoil," said Henry Dawar, deputy chairman of Machar's SPLM-IO party.

The government, meanwhile, admitted that the parties "lagged behind" on the permanent ceasefire and transitional security arrangement.

IGAD's South Sudan special envoy, Ismael Wais, was optimistic anyway, saying both parties had avoided a crisis by agreeing to further work on the unresolved aspects of the deal rather than push ahead too early.

"Everybody is asking the question 'what next'?" said Wais. "Would there be a problem? Is the implementation of the agreement a failure? Have we failed already and similar questions. Now, today and yesterday, this meeting of the political leaders of the Republic of South Sudan proved that all the parties are still committed to the peace agreement."

Tens of thousands died and millions of people were displaced by South Sudan's civil war.

Although the peace deal has reduced the fighting and partly alleviated the humanitarian crisis in the country, a UN panel of experts said in a report on Tuesday that the country still faces significant challenges.