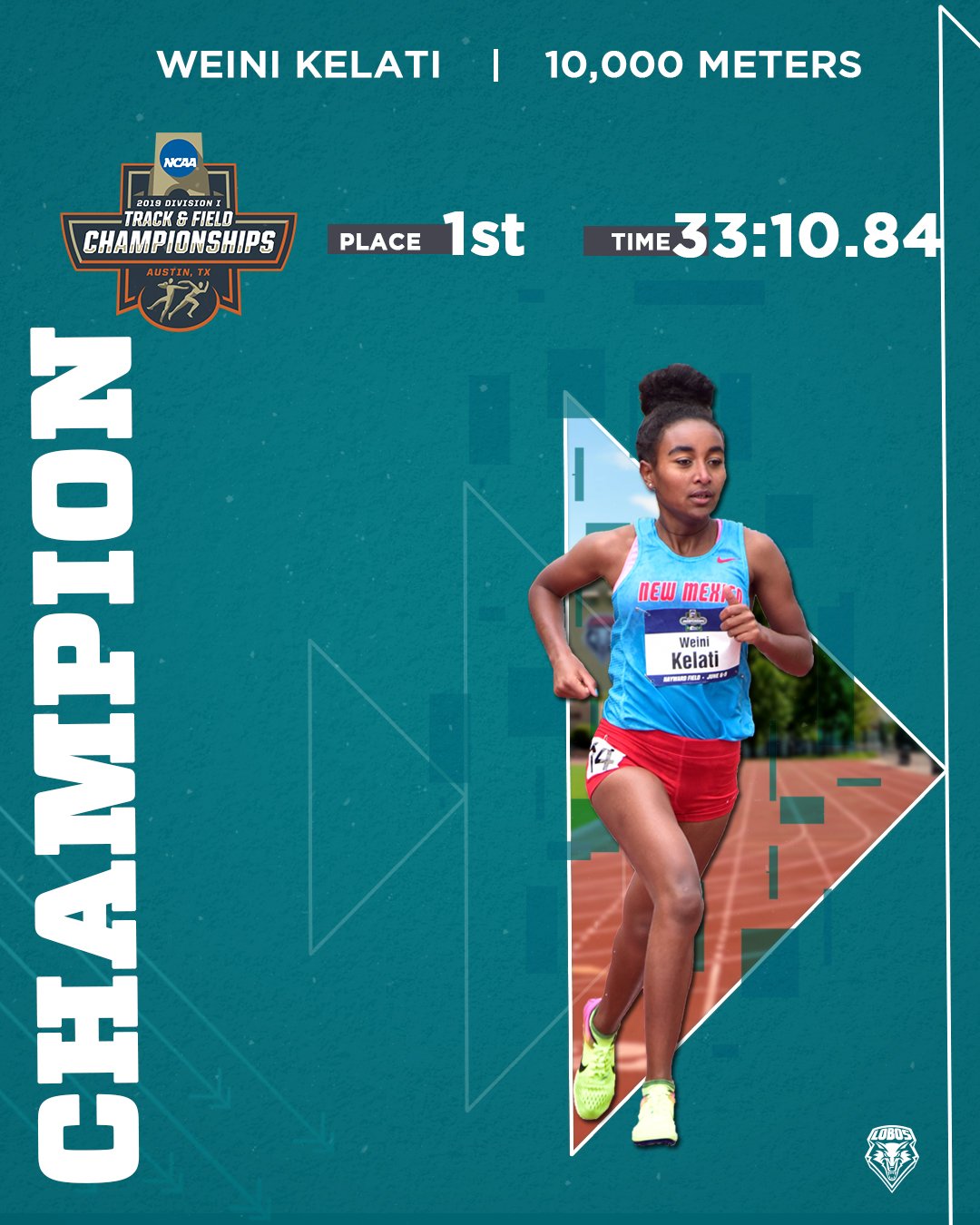 AUSTIN, Tex. — Last night, BYU coach Ed Eyestone called the 10,000 meters “the most exciting event in track & field” — albeit after a 24-lap setup. Tonight, we saw why.

With one lap to go in the women’s 10,000 final at the 2019 NCAA Outdoor Track and Field Championships, New Mexico’s Weini Kelatiheld a near five-second lead and looked to be on her way to her first national title. And then things got interesting.

Kelati had broken away from an eight-woman pack with six laps to go and steadily grew the lead lap over lap — from 1.79 seconds with five to go to 3.18 seconds with four to go to 4.74 with three to go to 5.38 with two go. However, on the penultimate lap, her lead shrank to 4.96 seconds as Oregon’s Carmela Cardama Baez and Washington’s Isobel Batt-Doyle both gained on Kelati on that lap. But it wasn’t until Cardama Baez — who was just 4th at the Pac-12 meet last month and didn’t even make this meet last year — took off at the bell that it seemed like any of them had any realistic chance of catching her.

When Cardama Baez went, though, she went. Down by nearly five seconds and more than 25 meters at the bell, she had the lead down to just over 2 seconds and 10 meters with 200 meters remaining and she was continuing to gain on Kelati around the final turn. With 100 to go, Cardama Baez had cut the lead to two strides and swung wide for what seemed like the inevitable winning move.

Except Kelati wasn’t having it. Cardama Baez may have been able to claw back 25.25 of the 25.5 meters that she trailed by, but Kelati would not let her have the final half meter. Just as it looked as if Cardama Baez would blow by her, Kelati responded, fighting off Cardama Baez’s move before launching one of her own with roughly 55 meters to go. Cardama Baez, spent from the effort, could not fight back, and Kelati prevailed in 33:10.84 to Kelati’s 33:11.56, Cardama Baez’s 68.72 final lap, which we estimate to have been 35.6-33.2, was just not quite good enough for the win as Kelati closed in 72.96 (38.6/34.4).

What a race. Watch the finish for yourself.

The race started slowly, with no one wanting to force a fast pace. Not a surprise for while even though the sun had set, it was still warm at 78 degrees with 78% humidity. Kelati and Notre Dame’s Anna Rohrer, both noted front-runners, traded leads over the first 19 laps, with a group of 17 women coming through 5k in 16:56.

Though that pack would whittle down slightly over the second half of the race, it mostly stayed intact until Kelati’s big move with six laps to go. The result was a winning time of 33:10 — over a minute slower than the meet record of 32:09 set by Kansas’ Sharon Lokedi a year ago. Behind Kelati and Cardama Baez, Washington’s Isobel Batt-Doylewas 3rd in 33:17.81 as Arkansas’ Taylor Werner picked up five valuable points in the team battle, finishing 4th in 33:20.68. Michigan’s Erin Finn, a four-time NCAA runner-up who battled back from hip surgery earlier this season to make the NCAA meet as a sixth-year senior, was 12th in her final collegiate race, running 33:40.88.

Quick Take: Weini Kelati knew someone was coming for her and prepared herself accordingly

Kelati is not a kicker; her trademark is to try to break the field with a hard late-race move from a mile or two out, as she did today. The first two times she tried it this year, it almost worked. At NCAA XC in the fall, she gapped the field but Colorado’s Dani Jones came storming back down the final straight to relegate Kelati to second. At NCAA indoors, Kelati again broke everyone in the field but one, with Wisconsin’s Alicia Monson kicking by her on the final lap.

So tonight, Kelati knew somebody would come for her at the end of the race.

“I know that some runners have [a] really good finish, and I just prepare mentally and physically, how am I going to deal?” said Kelati, who grew up in Eritrea before moving to the US while she was in high school. “I’m not going to give up, whatever comes.”

Kelati had been tracking her lead on the scoreboard at the end of each lap, but she said that as she hit the bell, the video feed had switched to a field event; instead, she knew that Cardama Baez was starting to close because of the reaction of the crowd. Then with 100 meters to go, she saw Cardama Baez’s shadow and realized how close she was.

“I was like, woah, there is someone coming to me, but I’m not going to give up until the finishing line because I will run until I faint,” Kelati said.

Fortunately, Kelati didn’t have to run that hard to win her first national title.

Weini Kelati Turns Back Carmela Cardama Baez Over the Final 100 ...