(Asharq Al-Awsat) Kattan: 'Council of the Red Sea and Gulf of Aden' Is Strategic Necessity

Kattan: 'Council of the Red Sea and Gulf of Aden' Is Strategic Necessity 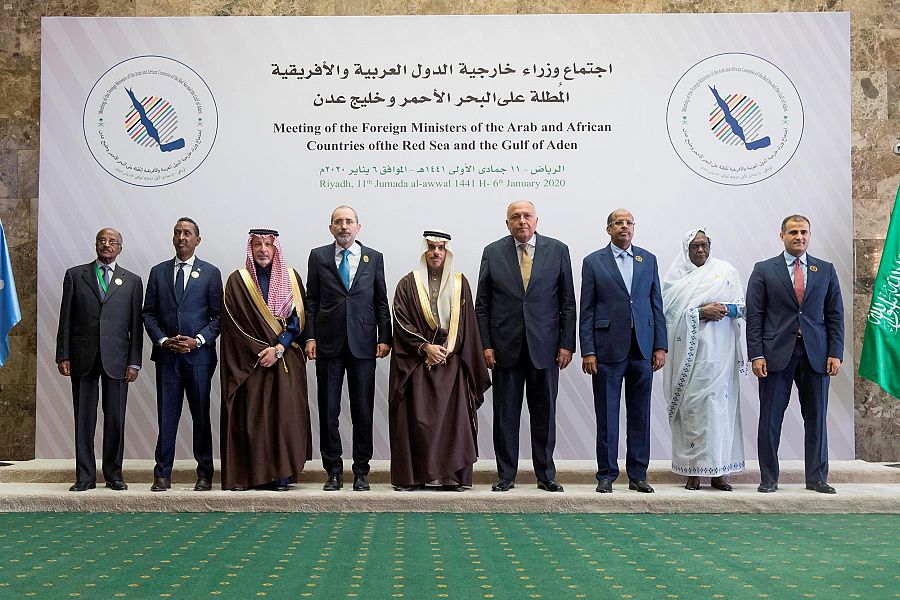 Saudi Minister of State for African Countries Ahmed Kattan (Asharq Al-Awsat)
Kattan explained that the safety and security of the Red Sea, which covers an area of 178,000 square miles, was of high strategic and geopolitical importance for the Kingdom due to its geographical location linking the three major continents.“It has become necessary to provide an economic strategy for investment and development cooperation between the countries of the alliance and other countries which share common economic interests,” he said, adding: “It is as well important to take advantage of the available opportunities to create partnerships and establish joint projects and investments that stimulate economic progress and development.”The Saudi minister recounted that the idea of forming a regional cooperation framework in this particular region dated back to 1956, when Saudi Arabia hosted a tripartite summit in Jeddah, with the participation of King Saud bin Abdulaziz, President Jamal Abdel Nasser, and Imam Ahmed bin Yahya.The meeting saw the adoption of the Jeddah Charter, in which Saudi Arabia, Egypt and Yemen agreed to establish a joint security system, the implementation of which was later obstructed by the political conditions that rocked the region at the time.Years later, in 1972, the Kingdom organized a meeting in Jeddah, with the participation of Egypt, Sudan, Ethiopia, and Yemen. The joint statement affirmed the rights of these countries to the deep mineral resources of the Red Sea.In 1974, Saudi Arabia signed an agreement with Sudan on the joint exploitation of natural resources at the bottom of the Red Sea, which resulted in the establishment of the Saudi-Sudanese Joint Commission in 1975.The following year, in 1976, a tripartite summit was held in Jeddah in the presence of King Khalid bin Abdulaziz, President Anwar Sadat, and President Jaafar al-Numairi. They agreed on the need for military coordination in the Red Sea or the formation of a unified military committee, along with the announcement of a joint defense agreement between Egypt and Sudan.In the wake of security incidents in the region in the beginning of the 1980s and the high pollution rate that threatened marine navigation and the environment, Saudi Arabia intensified its efforts and succeeded in 1982 in the adoption of the Jeddah Agreement for Arab Security and the Environment, which was also signed by Jordan, Egypt, Sudan, Djibouti, Somalia, and Yemen.In 2018, the Kingdom hosted the Ministerial Meeting of the Red Sea Countries and has since maintained its work to enhance regional security coordination and cooperation, Kattan told Asharq Al-Awsat.The Red Sea - which has a coastline of about 5,500 km, an average amplitude of about 300 km and a depth of 2,500 meters, and encompasses around 1,150 islands – enjoys a unique strategic, commercial, economic, and security importance since ancient times, the Saudi minister noted.He added that the new alliance was the result of the urgent need of the region's countries for more cooperation and political coordination.On a different note, Kattan underlined Saudi Arabia’s “efforts to resolve differences between brothers in Africa.” He said that the Kingdom has harnessed its pioneering Islamic role in this regard, pointing out that the first result of those efforts was the historic peace agreement between Ethiopia and Eritrea.
-

Kattan: 'Council of the Red Sea and Gulf of Aden' Is Strategic ...