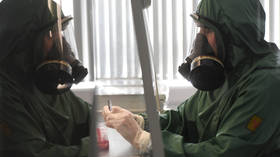 ©  Sputnik / Grigory Sysoev
Russian medics have come up with an effective way to treat Covid-19 infection using an anti-malarial drug. They say it not only curbs the symptoms of the disease, but also prevents the virus from replicating.

While medics around the world have been trying to create a specific vaccine against the virus behind the global pandemic, there have also been attempts to repurpose already existing drugs, to help the scores of patients that badly need treatment. Russian pharmacists on Saturday said they'd found one such drug –called Mefloquine– to be effective in stopping Covid-19.

The drug, which has been around since the 1970s, blocks the degenerative effect Covid-19 has on our cells and doesn’t allow the virus to replicate further, the Russian Federal Medical-Biological Agency (FMBA) said in a statement. They added that Mefloquine’s immuno-suppressive effect prevents the inflammatory response caused by the disease.

The Russian medics have been working on “an effective and safe scheme to prevent coronavirus infection on the basis of mefloquine, which not only would overcome the peak of incidence but would also effectively control it in the future,” the FMBA said.

Russia says it developed COVID-19 treatment based on anti ...