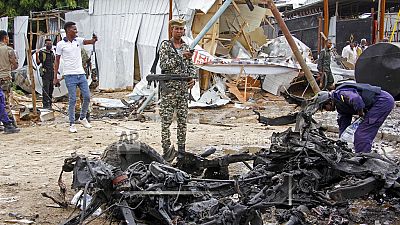 Somalia’s army commander, General Odowaa Yusuf Rageh has survived a suicide car bomb attack that targeted his convoy at the heart of Mogadishu but left at least one person dead and two others injured, an army spokesman said near the scene.

Somali army spokesman, Abdiqani Ali Ashkir said the while the army prevented them from inflicting casualties on the people. They thwarted the attack after shooting bullets against the suspects, seconds before it went off.

“According to the casualties, at least one person was killed and two others injured in the car bomb attack, the scene which you can see from here,” Ashkir added.

According to the casualties, at least one person was killed and two others injured in the car bomb attack.

Ashkir noted that the Somali army promises the people of Somalia that they will foil any attempt by the militants to kill innocent people, and will defend and protect them from any blasts.

Eyewitness said a car laden with explosives was denoted just near the convoy of the General who at the time was leaving the Defense Ministry compound within Mogadishu.

Although attacks against military officers are common in Somalia, but an attempt against a high ranking general is the first in many years.

No group has yet claimed responsibilty for the attack but but the nature resembles that of Al-Shabaab, a terrorist group that has been targeting military bases in recent months.