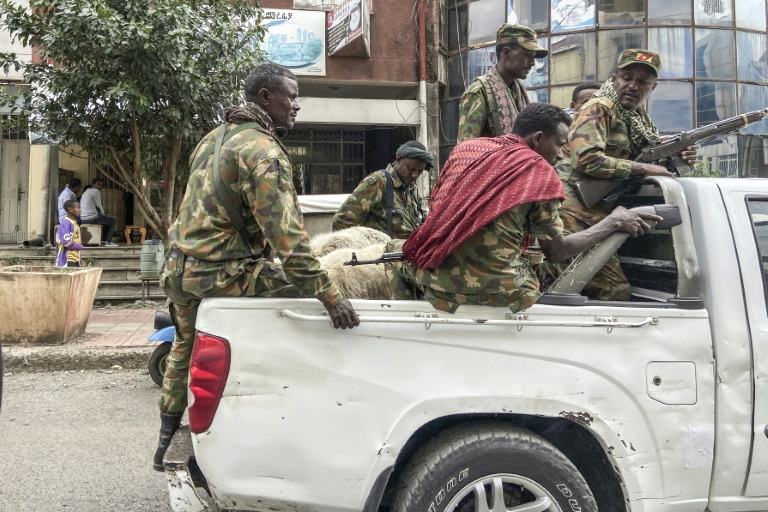 Members of the Amhara militia are fighting alongside federal and regional forces in Tigray EDUARDO SOTERAS AFP/File
Robbie Corey-Boulet
November 12, 2020,

Ethiopia's air force said Wednesday it had bombed arms and fuel depots in the northern region of Tigray, as an escalation in fighting prompted thousands more people to seek refuge in neighbouring Sudan.

Prime Minister Abiy Ahmed sent troops and warplanes into the federal state of Tigray last week after a months-long feud with its ruling party, which he accuses of seeking to destabilise the country.

Air force commander Major General Yilma Merdassa said jet fighters had "bombed arms and fuel depots as well as other areas that the TPLF junta has planned to use," the state-affiliated Fana Broadcast Corporate (FBC) reported.

Alsir Khaled, head of Sudan's refugee agency in the eastern border town of Kassala, said 11,000 Ethiopians had fled to Sudan this week.

The UN refugee agency UNHCR said the number of refugees "is likely to rise sharply" and urged neighbouring countries to keep their borders open.

The agency said it was also deeply concerned for more than 96,000 Eritreans living in four refugee camps in Tigray, as well as for humanitarian workers.

"Roads are blocked and electricity, phone and internet are down, making communication nearly impossible. There is a shortage of fuel, and banking services have halted resulting in a lack of cash," said UNHCR.

Tigray has been under a communications blackout since the military operation was launched on November 4, making it difficult to verify the situation on the ground as both sides make conflicting claims.

A resident of the regional capital Mekele told AFP there had been no air raids in the city since Sunday, and that while "telecom and banking services are not working", shops and markets had re-opened.

The head of the army's indoctrination division Mohammed Tessema said the city of Humera in western Tigray was "under the full control" of the army.

"The army is currently recapturing places on the road from Humera city to Sheraro city," further south, the state owned Ethiopian News Agency quoted him as saying.

The head of the Ethiopian army's northern division, Major General Belay Seyoum, told national media on Tuesday evening that 550 enemy combatants had been killed and 29 captured so far.

The international community has expressed fears about a potentially drawn-out conflict in Africa's second most populous nation.

Abiy has repeatedly sought to defend and justify the military operation.

He said on Tuesday it would end "as soon as the criminal junta is disarmed, legitimate administration in the region restored, and fugitives apprehended and brought to justice."

The city of Addis Ababa said in a statement that for three days from Thursday "peaceful demonstrations" in support of the defence forces would take place in the capital, as well as a blood drive, and collection of cash donations.

FBC, citing the police, also reported that "17 military officers have been arrested for creating fertile ground" for the TPLF to attack the national army.

The officers, whose ranks were not given in the report, are accused of cutting communication systems between the military's northern and central command, an act described as "treason".

According to the FBC, one of the suspects was the head of the army's communication department, who was caught sending 11 boxes "packed with explosives and missile components" to the TPLF.

Ethiopia's human rights commission chief Daniel Bekele on Twitter expressed concern over the arrests of six journalists, without giving details on when they were detained, and on what charges.

The TPLF dominated politics in Ethiopia for nearly three decades before Abiy came to power in 2018.

Since then they have complained about being sidelined and blamed for the country's woes, and tensions between the two camps have soared in recent months.

The TPLF is  continuing to deny the attacks that Abiy cites as the cause of the military operation in Tigray.

At the same time, however, government and military officials are describe the alleged attacks in ever-greater detail.

Lieutenant General Bacha Debele, a retired officer who had recently returned to the military, told a press conference Tuesday that Tigrayan members of the army's Northern Command had received a mission from the TPLF to "destroy the army from inside".

He said one army brigade "lost almost all its members ... and the enemy also lost many of its members", without detailing how many had died.

His claims could not be independently verified.