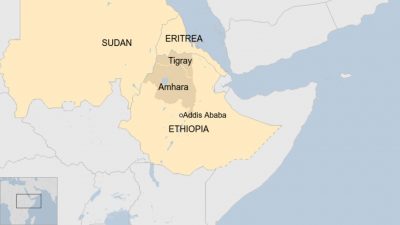 Less than a year after being awarded the Nobel Peace Prize, Ethiopian Prime Minister Abiy Ahmed launched a military operation against the country’s northern Tigray province. Ethiopia is often described as the Horn of Africa’s pillar of stability and has become a hub of Chinese infrastructural and economic expansionism into Africa – but this can all be threatened now with the descent of what appears to be a civil war.

With the world distracted by the U.S. Presidential Elections and its post-vote drama, as well as the war in Artsakh (more commonly known as Nagorno-Karabakh), Abiy alleges he launched a military operation in Tigray province on November 4 in response to an attack by the Tigray People’s Liberation Front (TPLF) against an Ethiopian military base that resulted in wounded soldiers and the looting of their belongings.

On Monday, the Ethiopian military reported that they were “hitting targets with precision” in Tigray province to “re-establish constitutional order.” Despite the Tigrayans making up only about 6% of the country’s population, the TPLF have dominated Ethiopian politics for decades. With the arrival of Abiy, belonging to the Oromo ethnicity, Tigrayan political domination began to recede, including through deliberate efforts by the central government.

Abiy’s decision to postpone the country’s parliamentary elections because of COVID-19 was the last frustration for the TPLF. Abiy postponed the elections because it was likely he would not be able to achieve a majority to remain in office. The TPLF argue it was an anti-democratic decision made possible by the pandemic. The TPLF decided to hold elections in Tigray province, even without authorization from the central government in Addis Ababa. Having been marginalized from power that it once held, Tigrayans used this chance to accuse the prime minister of violating democratic principles and, despite federal laws, conducted their own parliamentary elections.

Abiy came to power in 2018 as a new leader willing to undertake profound political and economic reforms in Ethiopia and was awarded the Nobel Peace Prize in 2019 for concluding the armistice between his country and Eritrea, bringing a final conclusion to the conflict that waged between 1998 and 2000. His reforms, however, are rekindling old ethnic nationalisms and tensions between different states in this multinational republic.

According to the 2007 Ethiopian census, the Tigray region is 96% ethnically Tigrayan and is wedged between Eritrea and Sudan, as well as the Amhara and Afar regions of Ethiopia. The Tigrayans accumulated considerable military experience because of the war between Ethiopia and Eritrea. Although the TPLF defend the autonomy of different ethnic groups in Ethiopia through ethnic federalism, from the 2000s onwards the group started to be accused of exercising authoritarianism, resulting in its political power decreasing.

There is no evidence however that the TPLF are receiving international military support at the moment as they appear to be a separatist movement. The TPLF believe this is a civil war while the central government claims that the battle is an operation to re-establish the constitutional order. If Addis Ababa succeeds in quickly achieving constitutional order, it will certainly be a political victory.

But more crucially, Addis Ababa need to achieve peace before the war spreads as it can expose many other volatilities in the region. The Horn of Africa, made up of Ethiopia, Sudan, Somalia, Eritrea and Djibouti, is considered one of the most volatile regions in the world.

The battles in Tigray could directly influences neighboring countries. Eritrea for example only became independent from Ethiopia in the 1990s, and the TPLF fought alongside the Eritrean liberation movement. Eritrea and the TPLF could rekindle their relations. Another example is that the waters of the Nile, which 86% of its flow comes from Ethiopia, is of critical importance to the survival of countries like Egypt and Sudan.

Any internal problem in Ethiopia can lead to drastic crises throughout the region.

For China, such an unravelling of instability in the region will affect their growing influence and economic expansion into Africa. Ethiopia is often described as “China in Africa” as Chinese companies are heavily investing in Ethiopia’s textile, pharmaceutical, construction and manufacturing industries – more so then anywhere else in Africa. According to the Ethiopian Investment Commission, by the end June 2020, Ethiopia approved over 1,500 investment projects from China, amounting to around $2.7 billion, accounting for 25% of the total direct investment projects in Ethiopia this year.

Having turned Ethiopia into China’s Africa hub, Chinese economic planners can take advantage of Ethiopia’s 110 million population for manufacturing and consumption as its middle class grows. But more importantly, from Ethiopia, Chinese companies can penetrate into nearby resource rich countries like Somalia, Sudan, South Sudan and Uganda, and use this to springboard deeper into Africa.

Chinese investments and contracts in sub-Saharan Africa totalled $299 billion between 2005 and 2018, according to the China Investment Global Tracker. In 2018, Chinese president Xi Jinping vowed to invest a further $60 billion into African nations. However, China’s deep penetration into the economic development of Africa is tied to its hub in Ethiopia.

Although Abiy emphasizes that the operation in Tigray is not a civil war but a rapid response to re-establish constitutional order, it still threatens to unravel Ethiopia and return it to the dark days when it was simultaneously fighting a civil war along with Eritrean and Somali separatists between the 1970s and 2000. In fact, the battles in Tigray have the potential to encourage other separatist movements in Ethiopia, particularly in Afar, Gambela, Ogaden, Oromia and Sidama.

For China, such a devastating war and the potential further fracturing of the Ethiopian state would be a catastrophic blow to its Africa policy. Ethiopia was selectively chosen by China to become its main Africa hub because of its central position in Northeast Africa and for being a center of stability in an otherwise chaotic region. In fact, it was China that financed and built the African Union headquarters in Addis Ababa because of its confidence in Ethiopian stability and potential.

If the TPLF’s uprising continues for long it might not only deter China’s continued economic expansion into Africa, but also threaten the very existence of the Ethiopian state if the many other separatist movements in the country become emboldened.